Reading a old article about witch hunt in the Swedish edition of  National Geographic  nr 9 2008 I got to know a lot about the witch hunt, torture and murder in Europe. 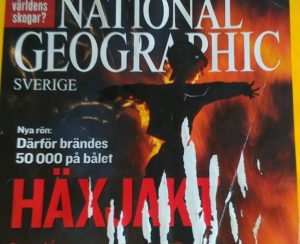 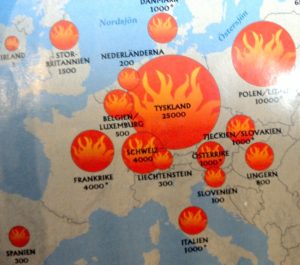 Ria Voltmer in Trier in Germany and Rainer Decker in Paderborn have both made researches about this issue.

1/4 of the victims of this hsyssteria were men, the rest women. 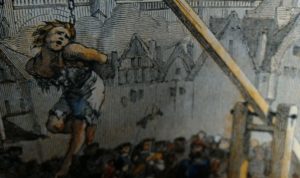 Jehowah witness have a special view about the Catholic and Protestant church Hell and Paradise vision. JW.org writes about witch hunts in  https://www.jw.org/en/publications/magazines/g201405/european-witch-hunts/

I think that the  JW article is reliable as it is confirmed by the article in National Geographic. So I see no reason to write a similar text here.

All kind of tools were invented to get more pain without killing, like chairs with spikes and mouth teeths damageing tools. 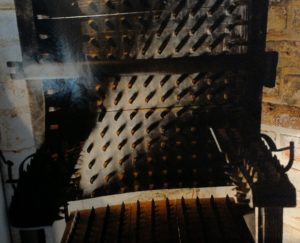 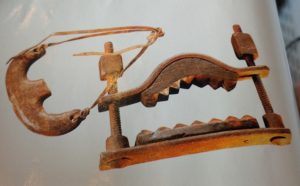 If a women did not confess after the torture they were considered innocent. but many left the torture chamber witouth nails, teeth and fingers.

At risc were people who had enemies or e.g. raped women.

Anna Göldi was a young probably pretty girl who was raped by Johann jakob Tschudi who was her employer to save his career as politician.   Anna Göldi was killed with a sword 1782. There is a museum in her memory in Glarus (   https://sv.wikipedia.org/wiki/Glarus_(kanton)   )

SHe was killed by sword but many other died under horrible torture.

It is remarcable how protestant and catholic clerks could be so evil.

“It is better for these witches  to experience torture than the fire in Hell.”

God and Jesus must have been aware about the possible consequences of this talk about Hell.

So far stories from the past. How is it today?

This happened 2009 in Nigeria.

“Police in Nigeria are holding a goat handed to them by a vigilante group, which said it was a car thief who had used witchcraft to change shape.”

A goat in Nigeria Africa was accused to have tried to steal a Mazda. Read more in http://news.bbc.co.uk/2/hi/africa/7846822.stm
I could not find the original article in https://www.vanguardngr.com/

Another article from 2012 deals with this issue in https://www.bbc.com/news/uk-england-lancashire-19211852