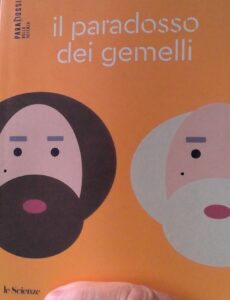 As the book did not explain the math behind it, I went to Youtube to search. I found again DrPhysicsA, who helped me create the page about EFE.

Dr PhysicsA has a BSc (physics) and PhD (nuclear physics) from King’s College, London.
Thanks to  “DrPhysicsA” I make good progress in applied and advanced math as well as understanding some of the more advanced Physics.

DrPhysicsA explain the math behind the Twins paradox in this video

When Newton sstudied Cartesius had problems moving forward, it is said that starte to read the book from the beginning. I do the same.

As I need to go back now and then to compare I use the manuscript and add screenshots do do that. See below.

OBS. These are my notations. I recommend you to write your own nottations while listening to the lecture.

what is space-time?
As we understand it is three-dimensional that at least is what we observe. That means to say that in any area of space you can go left and right or up and down or back and forth three dimensions and we usually represent that by three dimensions of space or three coordinates of space
which we often label x y and z and that is space.We now need to add to that time and that’s the fourth dimension but it’s very difficult to draw a picture with four dimensions. In fact it’s not impossible and even three dimensions can be rather confusing so let’s try and keep it simple and we’re just going to think of one dimension of time and one dimension of space so it will look like this time. 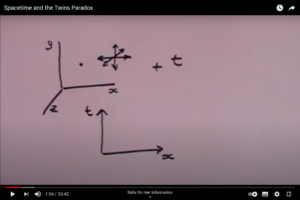 We’re going to draw upwards and space we’re going to draw as the x-axis we forget about y&z for the moment just to keep things simple. So time goes up and space goes along the x-axis and that is essentially a picture of space-time now.
Let’s compare the two if I stand still in space then my coordinates do not
change. I do not move along the x-axis or the y axis or the z-axis
I stand still and therefore that point doesn’t change.
Some rules for space-time chart

If you standstill, time is ticking 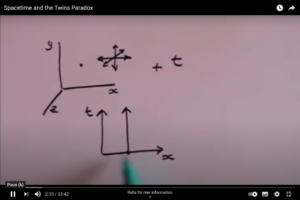 But if we stand still in space-time then although my space dimension doesn’t
change, I stay hereon the x-axis (ed. points to the dot on the chart) of course time is passing by relentlessly.
I’m moving that direction (ed. see arrow up) because although I’m not
moving in space I am moving in time if you standstill in the middle of a room,  time is nonetheless ticking by.
1. backwards in time is not allowed.
Now there are some rules about space-time for a start. You can’t go backwards in time. So if we take our space-time chart any movement like that is forbidden because although it implies that you are moving
to the left in space it also suggests you’re going backwards in time and there is no known mechanism for doing that. 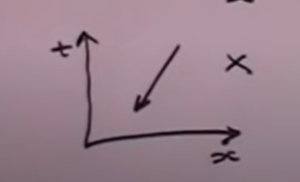 Although there are some theories that
suggest you might be able to find some
kind of hole that enables you to go back
to some point in the past there is no
mechanism for doing that and so you
can’t have any mote movement through
space time which involves going
backwards in time. 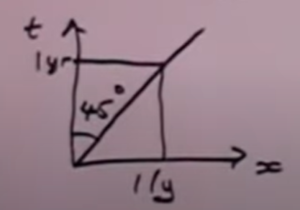 Now space-time charts are usually drawn in such a way  that the speed of light is drawn at an angle of 45
degrees and the way you do that is you just make sure that the coordinates are appropriate.
So for example time might be
one year and the space might be one Lightyear which is the distance light travels in a year so light travels one light-year in one year and.
That’s how you organize the chart. 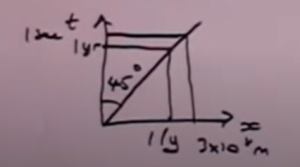 So we usually arrange it (ed. the graph) just for presentational purposes so that the speed of light is at 45 degrees.

2. not allowed to exceed C in space-time 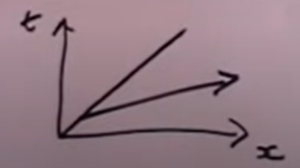 ow here’s another rule in about our space time chart here’s the chart time versus space.

Now we’re going to use these charts to examine what is called
the twin paradox.

They won’t celebrate their tenth birthdays
Imagine that this is the earth on which there are two twins and let’s imagine they just both just been born and here comes a space rocket which is traveling at speed V and V is 3/5 of the speed of light and it just so happens that this rocket has a little hook underneath it and as it goes past at 3/5 the speed of light it picks up one of these twins and carries it along at 3/5 the speed of light for a period of five years If it is traveling for five years at 3/5 of the speed of light it will travel a total distance of three lightyears now where is fit traveled that distance three light-years in five years it meets another spacecraft coming the other way also at speed V equals 3/4 C and that spacecraft also has a hook on it and as it passes this spacecraft it grabs hold of the twin and brings the twin back and that will also take five years for the return journey and as it passes the earth it releases the hook and the twin falls back down next to its brother and they are reunited after ten years and you might think that they could together celebrate their tenth birthdays each but as we will see that is not the case. 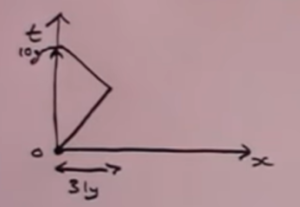 So let’s start by drawing a very rough space-time diagram just to show what’s going on and then we’ll do it slightly more accurately so that we can understand.
The first twin that remains on earth
what is happening is that the first twin the one that remains on earth throughout will start at the year naught and stay still basically up to year 10 and so the first twin doesn’t move along the space axis at all just stays still on the earth we’ll imagine for the moment that the earth is not moving and so the space-time direction for this twin is straight up they do not move through space they just move steadily
through time for a period of 10 years.
The second twin that leaves the earth
Now the other twin is picked up by the spacecaft and is whizzed out to this point here (ed on tthe right side of the image above)
and then the the return spacecraft picks them up and brings them back here and the total distance that they travel is three
lightyears.
twin number one 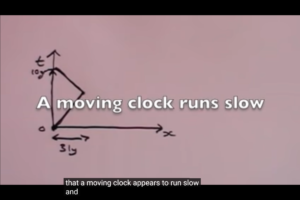 Now what has actually happened.
In my video on special relativity,
I explained that a moving clock appears to run slow. and I’m just going to explain that again here so that we get the full picture
The mirror clock

I said that you could invent a very simple clock it would consist of two mirrors and what you do is you simply bounce
light up and down between the two
mirrors and every time the light beam
hits a mirror it essentially causes a counter to move on and since the
distance is known and since the speed of light is invariant we know that the time to travel from the bottom mirror to the
top mirror is going to be the distance D
divided by C the speed of light.

And that becomes in a sense our time measure one movement from the bottom mirror to the top mirror constitutes a time interval which equals D divided by C.
The mirror clock on a rocket, as seen from earth

d
this is distance d
that was the distance we had here. (ed Between the mirrors on the rocket)
d’
this is going to be distance we’re going to call it D Prime and of course this is also distance d.
vt’
What is this distance here well it’s the velocity of the rocket which is V times the time it took from to get from here to here which we’re going to call T Prime.
t’
it’s the time which the observer on the earth will reckon that the rocket took to get from here to here.
well now we can do some basic Pythagoras.
d’2 equals …

as we know that
d=ct
then we can write:

The following operations are: 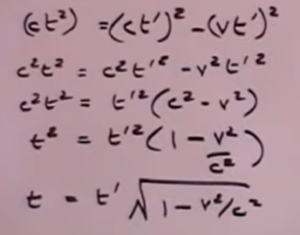 Lorentz transform
is defined as a “lineartransformations from a coordinate frame in spacetime to another frame, that moves at a constant velocity relative to the former. (Wiki )

The equation says that the bigger the velocity v, the bigger is the time difference between t and t’. 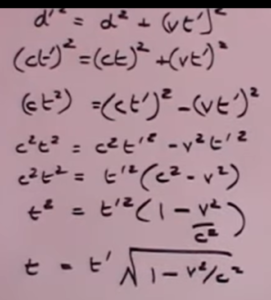 The twin paradox –  speed with accelerations.

A the twin in the rocket will accelerate at start and end of the travel on both directions, the perspective changes.
Acceleration slows clock down.
General relativity laws says that if a clock spends 40 years of its life in a (ed. Accelerating)
spacecraft to arrive back on earth, the clock will be  back on earth 59.000 years into the future.

Twins won’t see each other again.

The two examples are difficult to compare as in the first constant velocity case the twin in the rocket traveled 10 years.
I the second case they talk about 40 years. How many years later would the twin be back on earth with acceleration to v=3/5C and back to v=0?