As a retired K9 math teacher I said to myself I want to understand the math language used in the Einstein field equations. This led me to the issue tensors. In my math studies in Sweden we never studied more than vector calculus. I had to repeat vector calculus and learn about tensors. This page collect what I have learned so far and what sources I used. Maybe you will find it useful too.

This in one of several math pages. You find the others in the menu above under learning math.

Tibees explains vectors and reference frames with space time diagrams in one of her youtube but you have to pay to read  the text in your own pace in brilliant.org.

I started this issue writing my page about Einsteins field equation of general relativity in http://www.kinberg.net/wordpress/stellan/einsteins-field-equations-of-general-relativity/
Tensors are “the facts of the universe” (Lillian Liebherr)

I jumped into  Dan Fleisch youtube (see below under tensor basics) but discovered that I needed a basic vector update. I found that EigenChris offers a good one in this video.

I have seen this video where Dan Fleisch  gives a very good explanation about tensors. You need to know about vectors as I do but Dan explains vectors to  in case you forgot about these.  Vectors is just one type (rank 1) of tensors in the tensor family. It has to be seen several times to understand the indexing system.

“A student guide to vectors and tensors” is available as a ebook at books.google.it/books

There is a kind of tensor called metric tensor. I like the definition shared in mathworld.wolfram.com/MetricTensor.html

is a function which tells how to compute the distance between any two points in a given space….,.” (Read more in wolfram.com )

“Ax is the component (that pertains to and is a perfect representation of) the x-hat vector ( ed. x-unit vector)”

(In mathematics, a unit vector in a normed vector space is a vector (often a spatial vector) of length 1. A unit vector is often denoted by a lowercase letter with a circumflex, or “hat”:

Unit vectors are quite well explained in https://en.wikipedia.org/wiki/Unit_vector

like“the unit vectors in the direction of the x, y, and z axes of a three dimensional Cartesian coordinate system are”

“A student guide to vectors and tensors” is available as a ebook at books.google.it/books

There is a kind of tensor called metric tensor. I like the definition shared in mathworld.wolfram.com/MetricTensor.html

is a function which tells how to compute the distance between any two points in a given space….,.” (Read more in wolfram.com )

This part that starts minute 12 is a critical point that is more difficult to digest.

Each vector has its component (number)

“Ayx might refers to a x-directed force in a surface whose area vector is in the y-direction.”

How you can understand the rank of a tensor is well explained by eigenchris in the video below. In his channel you find a serie of tensor calculus videos.

When he continues with calculus it become very difficult if you never have done vector calculus. I have seen this video at least three times. 🙂
EigenChris shares two good definitions of tensors.

-dimensional space is a mathematical object that has

Tensors provide a natural and concise mathematical framework for formulating and solving problems in areas of physics such as elasticity, fluid mechanics, and general relativity.

e get these matrix of 9 possible multiplications or tensors rank 2:

I followed Eigenchris video to learn about forward and backward transformation. 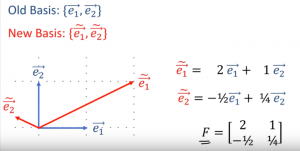 I followed Eigenchris video above to learn about forward and backward transformation.

This can be checked by mutliplying F and B
If you multiply FB you get I (the identity matrix) So B is the inverse of F. F=B-1. Read more about inverse matrices in http://www.kinberg.net/wordpress/stellan/matrices/#issue2 eEigenChris gives a very good explanation of what the metric tensor is. The derivation of it made by DrPhysics is in my EFE page