My first encounter with Islam was with Sufism about 10 years ago, looking for information about Islam I came in touch with Sufi sites and Sufi groups around the world. I had at that time no idea about Islam nor Sufism. 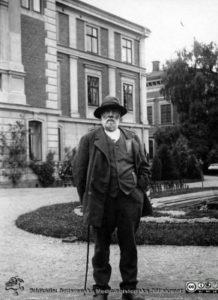 I saw a documentary spring 2018 about the Swedish aristocrat (Baron) Eric Hermelin, a man who translated many Sufi poems from Persian to Swedish while closed in a psychiatric hospital in Lund for more than 30 years. He was not mentally ill. He just had problems with alcohol  and a brother who wanted to get rid of him as Eric damaged

Read more about this extraordinary man in en.m.wikipedia.org

The documentary was available until July 2018 in www.svtplay.se

Carl-Göran Ekerwald  tells about Rumi and Eric in this Swedish youtube:

This documentary awoke in me again an interest in Sufism.

I got the best information about Sufism from Martin Ling in his little book  “What is Sufism?” available as pdf  at www.mailofislam.com

The origins are very unclear.

sufiway.org says that the pre-Islamic roots of Sufism go ” back through the early Christian mystics of Syria and Egypt, to the Essenes, the ancient Pythagorean orders, and the mystery schools of the Egyptians and Zoroastrians, among others. “

ias.org/ says “during the lifetime of the Prophet Mohammed, fifteen centuries ago, there was a group of pious individuals from different nations who, guided by the Laws of Islam, sought for the direct experience of the Divine. …”

“These individuals met on the platform, or suffer, of the mosque where Prophet Mohammed used to pray in Medina, Arabia. “

“Among the most famous were: Salman Farsi, Ammar Yasser, Balla’al, and Abdullah Masoud; some historians have added Oveyse Gharani to this list as well. …  their gatherings were held in private,…

After the Prophet passed away, each of the people of suffe returned to his homeland to instruct students e…  There they became the great missionaries of Islam.”

Sufism is “more comparable to the experiences of the senses than to mental knowledge.”

I love the metaphorical definition Martin Ling made in his script  (1). He compares in his metaphor

The Sufis are not interested in the water left behind but in the waves that bring it. Here is his description:

“There is only one water, but no two Revelations are outwardly the same. Each wave has its own characteristics according to its destination, that is, the particular needs of time and place towards which and in response to which it has providentially been made to flow. These needs, which include all kinds of ethnic receptivities and aptitudes such as to vary from people to people, maybe likened to the cavities and hollows which lie in the path of the wave. The vast majority of believers are exclusively concerned with the water which the wave deposits in these receptacles and which constitutes the formal aspect of the religion.

Mystics on the other hand and Sufism is a kind of mysticism are by definition concerned above all with ‘the mysteries of the Kingdom of Heaven’; and it would, therefore, be true to say, in pursuance of our image, that the mystic is one who is incomparably more preoccupied with the ebbing wave than by the water which it has left behind.”
(Source: Martin Ling).

Here is a list of a few sufis where Rumi is one of the most famous:

Sufi saints
are “portrayed as someone … who is specifically “chosen by God and endowed with exceptional gifts, such as the ability to work miracles”.These saints are listed in Wikipedia:

When I went to a mass in a protestant church I found a spiritual approach to God without a lot of the catholic help of images and statues.

The church had white walls, there were no statues of Saints. 7 youngsters had their first communion.

The music with its choir was wonderful. The youngsters read from the Frälsningskransen a kind of simplified Rosenkrans.

Sufism reminded me of Protestantism in its spiritual approach to God.

Unfortunately for some reason.Hans Küng doesn’t mention Sufism in the book I am reading. It would have been interesting to know his view about Sufism.

(1) One of the best sources I found is Martin Ling, a  Sufi from United Kingdom. He wrote a very good little book called “What is Sufism?” available as pdf  at www.mailofislam.com