Its a long time, maybe years,I never felt lonelyness. I even enjoyed it.

I traveled alone from Italy back to Sweden but met several good friends on the way staying overnight in Palermo, Sarzana and Milan.

I have been alone in Italy since January with one interruption: a visit from my brother and his wife.

Now I got this feeling back here in Sweden. And I wondered why.

The feeling of solitude

and as Elisabeth of trinity says (see below) a feeling of void in my chest.

It is like a pressure in the chest that reminds about gastritis.

Alone is in Swedish “Ensam”

One friend I dont remember who, said that

“Ensam” means “sams med en själv” (en: to be with yourself)  to distinguish from att var själv” (to be alone).

This is a important comment to be looked closer at.

to be with yourself

When I am with myself I dig deeper in my seeking of knowledge or answers to problems I have.
I feel good to be alone in the church at mass, as I am listening to my  inner voice.  I often dedicate my thoughts to my children and friends and seek answers about them.  Going to mass on Sunday is somehting I look forward to. I alo look forward to going to JW meetings. Elisabeth describes some of my being with myself.

Eliasabeth of trinity about solitude 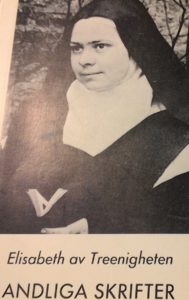 To be with yourself is for Elisabeth “To be with God”, Elizabeth sought silence and solitude.

“‘I so long for Him!’ wrote Elizabeth, ‘He creates a great void in my soul that only He can fill, and to do that He leads me into deep silence from which I should like never to emerge”

Lonelyness is a big source for pain.

It leads people to anxiety, fear of silence and to manage this some take help of drugs or alcohol.
Som others try to fight lonelyness looking for relations with the opposit sex, something that tends to lead to short relationsships going back into a darkness of  lonelyness.

When I came back to Sweden I felt again lonelyness.

I wondered why. Was it because I am missing the friends in Italy?

Is it that physical contact is rare here? (In Italy you always embrace and kiss friends on the cheeks. You experience more physical lonlyness in Sweden.

It is not rare that you met people on the road passing you just a few meters away and they do not say hello. Like walking zombies.

Hanna is a Swedish  journalist who works as a speaker in the Swedish radio channel  P3. The SJ railway magazine Kupé tells about her views in a article about solitude.

The most Swedish and a difficult feeling.

People can be alone together

I found a Swedish article with the title “People can be alone together” written by Louise Bringselius in Barometern  13/8 2018 (written in Swedish but here translated by me to English ) that reads:

People can have many contacts without ever reaching each other in depth.

There has been a lot of discussion about people’s loneliness in the spring and summer. Several new studies show that loneliness can be as dangerous for health as smoking. Debates from right to left have called for efforts, especially to reduce the elderly’s loneliness. Some believe that we should consider setting up a “lonelyness” minister, as has been done in Britain.

loneliness has diminished significantly in  Sweden

That’s why it might come a bit like a cold shower when two professors in sociology now enter in the debate (SvD Debate 8 August) explaining that there is no indication that loneliness has increased. On the contrary, loneliness has diminished significantly and Sweden is even one of the lowest-rated countries in Europe. The researchers are called Carina Mood and Jan 0. Jonsson, and they refer to data from, among others, SCB’s life-level study.

This does not stop certain groups from testifying that they want more human contact. The generally low level of social loneliness also may be a  reason to stop this important debate. But while the discussion today is almost exclusively about people’s social loneliness, there is a greater issue that has come to pass more in the dark.

the question of human existential loneliness.

The existential loneliness is not about how many people we actually meet in our everyday lives, but about a lack of deeper togetherness and meaning. This feeling may appear regardless of whether or not you have a social connection. That way, people can be alone together. They can have many contacts without ever reaching each other in depth. Often lacking enough time and commitment to really listen. (I’ll write more about this in future numbers by Axess.)

You may find that it is strange with such weak relationships at a time when many are overwhelmed with social contacts. It is social media, meetings at work, social intercourse and the general pulse of urban life. But the focus is often on individual life projects. Byung-Chul Han philosopher explains the existential loneliness and emptiness of living in a performance community. People’s fixation on accessibility, activity and achievement makes it impossible to become sincere with another person. An interesting aspect is that much of this press comes from man himself, according to Byung-Chul Han. He talks about how society was previously characterized by control, exercised by authorities, but that today it is rather characterized by performance requirements that man himself maintains. These are aspects that are particularly important to take into consideration, as we know that the number of burnout patients  increases  over time.

The debate about loneliness therefore needs to continue – but is shifted to the more elusive question of human existential loneliness. Have we got a society where people are alone together? In this case, the goal can not be that we can count on even more meetings, because just the quick meetings can be part of the problem. The goal may be that we will meet more in depth. Then, at the same time, we must address the bigger question about what values ​​we want to embody our modern society and how we build the community. “

The article above about Hanna never digs deeper into the issue solitude. But she mention something important. The missing of something of her childhood, the doors open in her fathers neighboorhoud,  “where people have time to listen to you”. I personally feel that the doors are less open here in Sweden than in Italy.  A Syrian immigrant neighboor opened the door for me but not the Swedish neighboors. I believe Swedes are more afraid for inviting unknown people.  “Welcome, step inside, Do you want to eat with us?” is something I never have hear here in Sweden.  Even the poorest welcome you to the table in Italy. I have heard several time saying like this “We have no money but there is always a spaghetti for you”.

And if my neighboor in Italy is doing some job I have never heard “I have no time to talk right now”.

In Germany, if you sit down in the bus beneath someone you always hear “Grüss gott”. Here you hear nothing. Zombies. Like walking deads.

Drunken Swedes start conversations with you.

Swedes travel like the vikings once did but it is rare you met a Swede talking to you without having drunk a few beers or glasses of wine.  You see a lot of drunken people  here in Sweden. Drunken Swedes start conversations with you.

You have to take the initiative.

I often start conversation in the bus or tram and that has positive response.  They answer and are friendly Maybe because I look good and not like an alcolic or drug dealer. You have to take the initiative. But the talk stops there.