Percolation theory is one part of the network science.

My brain is to old  to immediately understand the math behind this theory. But I do my best to document on this page what I understood with time. One of my problems with online info is my restricted English knowledge. I had to learn about the words  “cluster” and “lattice”

the theory deals a lot with clusters. read about clusters below. 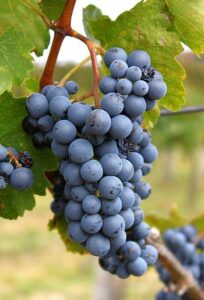 The name cluster refers in English to a wine grape. (Image source: Wiki )

If we talk about a computer cluster we refer to a group of cooperating computers.

In Percolation theory we talk about cluster of nodes linked together. 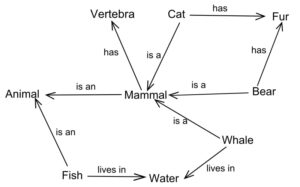 ( Image of a semantic network from Wiki. )

Percolaton as a phenomena is  quite easy to understand reading about the phone Bluetooth clusters created with the app Bidgefy.

When you install Bridgfy on your phone all phones with that app will become nodes in a Bluetooth network or cluster. If there are enough phones reachable by Bluetooth (within 100 meter distance) you can send a message to one of the phones in the phone cluster as illustrated in the image on the right (taken from “Le Scienze”published  June 2021, on page 42).
The message is encrypted and jumps from one phone (node) to another until it reaches the receiver pone.
you can also broadcast to all the nodes in the cluster. Something they may have done in HongKong during the demonstrations to warn for the Chinese police.

It may also be understandable when looking at the Jenga game. Where each piece of wooden blocks is a node in a cluster (the tower). When you remove the nodes 8wooden blocks) the cluster will become weaker.

A video about cirus capside collapse is available in youtube.

A Protein can be seen as a cluster where the nodes are the aminoacids. If one aminoacid is missing the protein changes shape and may not work anymore.

A number of papers have utilized Darcy’s law to model the physics of brewing in a moka pot, specifically how the hot water percolates through the coffee grinds under pressure, starting with a 2001 paper by Varlamov and Balestrino,[4] and continuing with a 2007 paper by Gianino,[5] a 2008 paper by Navarini et al.[6], and a 2008 paper by W. King.[7] The papers will either take the coffee permeability to be constant as a simplification or will measure change through the brewing process. (Wiki )

, Hopfield suggested that a dynamical Ising (ed. percolation) model would provide a first approximation to a neural network which is capable of learning. (Wiki )

Rread more in Wiki. which is the main source used in this section.

The first model studied was Bernoulli percolation. In this model all bonds are independent. This model is called bond percolation by physicists.

Bernoulli (bond) percolation on complete graphs is an example of a random graph. The critical probability is p = 1/N, where N is the number of vertices (sites) of the graph.

A generalization was next introduced as the Fortuin–Kasteleyn random cluster model, which has many connections with the Ising model and other Potts models.

A ising model you can read about  in Wiki
Look at the curious metronome synch example caused “by small motions of the base on which they are placed. “

Percolation through porous materials like hot water in coffee was first described with experiments by Darcy. DArcy’s law is  is used extensively in petroleum engineering to determine the flow through permeable media.

There are many types of lattices:

All these are described here.

The percolation threshold is a mathematical concept in percolation theory that describes the formation of long-range connectivity in random systems. (Wiki )

The percolation threshold is the critical value Pc of the occupation probability p… such that infinite connectivity (percolation) first occurs.

But it is for me much harder to understand the math behind its theory. I have never been good at statistics, an important part of percolation theory.

percolation theory describes the behavior of a network when nodes or links are added. This is a geometric type of phase transition, since at a critical fraction of addition, the network of small, disconnected clusters merge into significantly larger connected, so-called spanning cluster.

the best Youtube describing the probability in a lattice is made by Martin Blunt.

The Pc in a infinite lattice is 1/2