This page is a development of a post published August 2018.

Almost everyone  in this world knows about about the Christian belief that  Jesus was born from virgin Mary. But not many knows that this is also told about in the Quran.

I were surprised that Mary according to the Quran is above all “the women of the worlds.” I like that. This has never been said in the Gospel even if Mary is the object of prayer like in  “Ave Maria“.

there is no reason to write my own text about Mary when there is a very good one  at Wiki. a text I know is  checked and verified by many Wiki editors. I choose therefore to copy here what is said in Wikipedia:

“Mary (Arabic: مريم‎, translit. Maryam), the mother of Jesus (Isa), holds a singularly exalted place in Islam as the only woman named in the Quran, which refers to her 94 times and explicitly identifies her as the greatest of all women,  stating, with reference to the angelic salutation during the annunciation, “O Mary, God has chosen you, and purified you; He has chosen you above all the women of creation.” (  Quran 3:42 ). 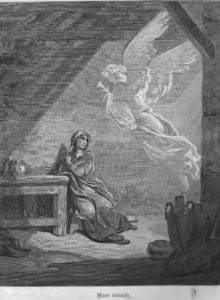 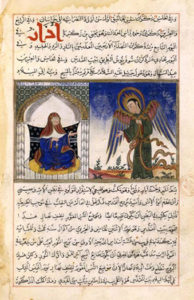 Annunciation of a child

The  Gospel of Luke tells like this “26 God sent the angel Gabriel to Nazareth  28 The angel went to her and said, You will conceive and give birth to a son, and you are to call him Jesus. 32 He will be great and will be called the Son of the Most High.“

To understand the magnitude of this miracle of God, one has to know that “The human genome contains approximately 3 billion of … base pairs, which reside in the 23 pairs of chromosomes within the nucleus of all our cells.” (Source:  www.genome.gov ) Presuming  that Jesus got half of the DNA from Mary (minus the MtDNA Jesus got from Mary)  (Source:  https://www.nytimes.com  ) ,God created in a egg in Marys  fallopian tube about1.5 billion base pairs exactly ordered to become a readable code for half of  the proteins  (10.000) Jesus body needed to function normally.

The Quran and the Gospel does not give any hint how God could achieve this miracle. I can myself not find an answer with my knowledges about Quantum physics i wrote about i  my article about the Quantum God.

About the creation of Adam I came to a answer I described
in my  Enlightened genesis. But for the “creation” of Jesus I am knocking on a door with noone home.

I wonder if God really had to create 1.5 billion base pairs  as explained above?

As many paintings with Jesus show up a blond Roman looking man I thought many years ago that Mary maybe was raped by a Roman officer. And God implanted in the body of this boy his Holy spirit.

Joseph as a good loving man may have saved Mary’s life marrying with her despite being pregnant. And the Catholic church may have invented the story of virgin Mary and Josephs dream to justify the concept of Jesus as the son of God.

I reject today this hypothesis thanks to what is written about this and Jesus in the Quran.

As the Quran clearly states about Allah  that

So the hypothesis  I now have is that God simply fertilized a egg in Mary with a sperm from Joseph like many women do IVT ?. But this would imply that Jesus would become very similar to Joseph. Wonder wonder but we may never get answer. to how this miracle was realized. Who was Jesus then?