I published this post 2017 October 11  after looking at two speeches:
1. a speech of a Tibetan Nunn, Tenzin Palmo Jetsunma about love and attachment and
2.  the  speech of Emily Esfahani Smith about happiness and pillars of the meaning of life has been moved to a page at www.kinberg.net/meaning-of-life/

Tenzin talks in her video about attachment. I have been looking around for a synonym.

” I love you therefore I want you to make me happy”.

and she adds that
“attachment is like holding very tight. “

Tenzin says that genuine love is when :

“I love you, therefore I want you to be happy.

I am a big believer in the therapeutic value of a separation to strengthen the marriage if it’s done in the right way for the right reasons and if there are clear agreements from the start. ( Source:  https://www.psychologytoday.com )

When I think about love and separation, I can not forget the story of the Swedish Sailorwoman  ( sjömanshustrun ), a story told for me but probably invented, that the statue was raised in memory of a woman who every day went to the harbor to look if her husband was coming back. The husband did not like many others, fishermen and sailors on tradinG ships during the last war.

some love stories survive separation, some do not.
The story of Manika who had a maternal death and while dying made an agreement with her husband,, is a curious story of a remarkable separation that did not survive. Her husband married another woman. I wrote about it in http://www.kinberg.net/2018/01/24/life-and-afterlife/#science

“The problem is always that we mistake the idea of love for attachment.

We  imagine that the grasping and clinging that we have in our relationsships, shows that we love whereas actually it is  just attachment which causes pain.

Because, you know the more we grasp the more we are afraid to loose, then if we do  loose, we are going to suffer.

You know, attachment is like holding very tight. Genuine love is holding very gently, nurturing, but allowing things to flow, not to be held tightly. The more tight we hold on to others, the more we will suffer. But its very hard for people to understand that, because they think that the more they hold on to someone, the more it shows they care about them but it’s not, it’s really just that they are trying to grasp at something because they are afraid that otherwise they themselves will be hurt.

Any kind of relationship which imagines that we can fulfill ourselves through another is bound to be very tricky.  I mean, ideally, people should come together already feeling fulfilled within themselves and just, therefore, appreciating that in the other rather than expecting the other to supply that sense of well-being. which they don’t feel on their own.

Then it’s a lot of problems and also along with the projection which comes with romance where we project all our ideals and desires and romantic fantasies on to the other which the other cannot possibly fulfill once you get to know them and recognize that it’s not Prince Charming of Cinderella, it’s just a very ordinary person, also struggling.

And unless one is able to see them to like them as well as feel desire for them and to also have loving-kindness and  compassion then it’s going to be, it’s going to be a very difficult relationship.”

“Love is including someone else as a part of yourself.”

Sahdguru talks about love in this youtube about Rumi:

“The Swedish Theory of Love”

“Internationally Sweden is seen as a perfect society, a role model, and a symbol of the highest achievements of human progress. The Swedish Theory of Love digs into the true nature of the Swedish lifestyle, explores the existential black holes of a society that has created the most autonomous people in the world.” (Source:  www.imdb.com/title/tt4716560/plotsummary?ref_=tt_ov_pl

“Each human must be treated as an independent person and not as an appendice of a provider.  There has to be created social and economical conditions to make each individual independent”

I looked at this film/documentary and felt really bad thereafter.

First of all. It exaggerates the way Swedes relate to each other.

See the film  at

There is a group of youth who join in and live together in the woods. they say among others:

Young Man with beard in the wood: “We sit in our apartment and are taken care of by society, And we forget to take care of each other. It makes me very sad”
Zygmunt Bauman, Polish sociologist says: “it is untrue that happiness means a trouble-free life. Happy life means overcoming difficulties. That is being lost when comfort grows. One thing that the State can not provide is to be with other people, to one of a company. That you have to do yourself.
People who are trained in independence are losing their ability to negotiate cohabitation with other people. because you are already deprived of the skills of socializing. “

There is a big need of physical proximity.

Throughout human history, social groups have invested immense amounts of wealth and time to keep threatening out-groups at a distance.
“Studies show that hugs and other physical connections reduce levels of stress hormones” ( hwww.shebaonline.org/ ) 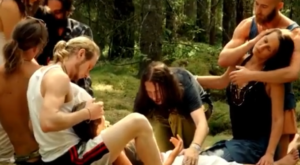 And we should not forget the pillar of belonging important for happiness. Read more at www.kinberg.net/meaning-of-life/

Jealousy is a treath to many relationships

Tenzin’s definition regards all kinds of relations. It doesn’t make a difference between heterosexual or homosexual relationships.

In my examples below, I identify therefore the members in a pair with numbers, one (1) and two (2).

a relation is impossible or difficult if