This page will have  more updates. I mark subtitles in Index above with green what has content so far.

I am reading “The art of being kind” (published 2005)  by Stefan Einhorn a Swedish oncologist and writer. This page will be finalized when I have read his book  and documented what I found out reading it.

If you too are intrested, you may know about this book looking at a Ted at this video from 2009:

Stefan talks English. A hint: click on the three buttons under the video in youtube to get the transcipt in your language.

There are many “the art of… ” books but I like this for a reason I will try to explain below. 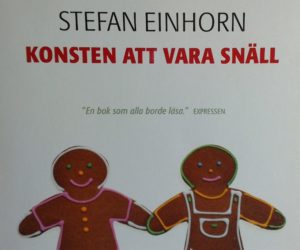 To be a kind teacher

I did my best to be kind my pupils my last years as a teacher. My  thought was, you must love your pupils to be able to reach them. I also learned that I will not gain anything if I cry at them being angry, especcially with pupils who have some sort of  disorder, like Attention deficit or hyperactivity disorder or similar.
Kids are not born evil. I they devlope evilness it’s for a reason you should try to  understand and make you pupil udnerstand  too as part of developing emphatic intellgence (EQ)

Its very important to understand this with pupils that risc to develope criminal or destructive behaviour, kids that have low resistance to obstacles in life. We have suburb areas in our main towns were many pupils end up in criminal gangs were they become important and can get easy money. Politicians here talk about having more math lessons and more discipliine in the class. But they seem to forget the reasons why many kids fail in school. I have understood that the teachers attiude in the class is very important more important than the amount of lesson time. Quality is  more important than quantity.

What do you say when a pupils doesn’t give you the right answer? How do you react in the class if a pupil makes something stupid?

It loks like many schools and teachers forget or do not understand what is valuable on the street in youth gangs.

On the street the curriulum is different. It may be that if you get your  teacher angry you get 5 points. If you make you teacher crazy that can give you 10 points. if you make you teacher loose his job htne you get 30 points. If you are relegated from the school, wow , 50 points. If the police takes you, that is  great, 100 points, if you end up in jail, you ar the king, you earn 1000 points and you may get a position of respected boss on the street. teachers should not play this game.

If someone makes something provocative do your best to keep calm and talk with that pupils after the lesson somewhere  in a quiet and relaxed place. Tell with your kind  voice hat you care about the pupil (if you do it of course. You should however:). Ask the pupil why he/she did that. If the pupil can not answer tell that you both can think about it until the next time you met. Get the pupil to think about the behaviour and what it means for the future.

I had often to talk about the future of our pupils. Some thought  they want to be a socccer player. I said, Good, you certainly have this possibility. But what happen when you become old? I think you should one day instead  get so rich you can buy soccer clubs.

Some other said, “I will become a drug dealer”! I answer, well, it is not nice to have a lot of money and not be able to use it without always hiding yourself. Study and become smart and you will maybe earn a lot of money in a honest way. It costs you some efforts but you will become a lifelong winner.

I am proud of this New years card from a pupil of mine. 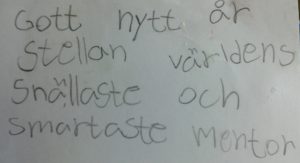 She probably thought I were smart as I know 6 languages and were learning Arabic. 🙂
Mentor is a teacher who has dialog with parents. I were her mentor and math and Science teacher.

Or was it only because i were kind?

I  am in touch with three former pupils in Facebook  and discord among others.  I am very happy about that One of them is my videoeditor teacher now and we talk often about different life issues.

I were happy when I found this book. I want to learn more about this issue.

Kind (ed. in Swedish “Snäll”) is often compared with being stupid in Sweden, one who is not able to defend himself.  I have met pupils who thought that but they learned after a while that I did not accept all kind of behaviours.

Ethics is about  relations with other fello humans in this biosphere. It is how e relates with other humans and with our world.

Every time we met a human being we deal  also ethics. How do I respond the best way to my fellow human needs? How much time do I have for my fellow man or woman?

Etic is the art of being together.

We are responsible for our Earth with all its inhabitants, fauna and flora, as we can make our Biosphere become a Paradise, a Hell or destroy it.

In many parts of our Earth there is Hell, mainly due to human behaviour.

Ethics is the pillar upon which humanity and our Biosphere can survive.

Even if both Moral and Ethics deal with human relations,   these two words have with time got different values.

While Ethics are the “norms, laws and rules we are expected to follow”,
Moral is the way we follow the ethic laws and rules. It is how we think and act when there is a ethical problem.

Like e.g. would you lie or hurt or kill someone to save a third person or a victim?

We often met ethical dilemmas. our brain is developed to deal with these.

To help us solve these ethical dilemmas, we have five tools we should be aware about and develope.

As I knew students cant learn if they come to the classroom with bad feelings and. They often also misunderstood each others startint this way stressing conflicts. I started every lesson with asking how they felt,  giving them a number of words for feelings marked in green (good feelings for successful learning) to red (bad feelings for unsuccessful learning). I personally believe that you can never succeed in kindness without haveing developed EQ. To raise the empathy quotient EQ one has train step by step:

EQ is also important for successful collaboration as one of the strategies are to recognize your own defensivness. I wrote about that in http://www.kinberg.net/wordpress/stellan/2018/02/04/cooperation/#Improving_collaboration

Empathy is important but

being an Empath can lead to Adrenal Fatigue, Insomnia & Exhaustion, “empathic distress” (  https://www.elephantjournal.com/2017/03/empaths-adrenal-fatigue-broken-sleep-exhaustion/    )

It is important that “We question the benefit or harm we may be causing ourselves and the person we are serving.”

We must be aware about false kindness as this often lead to undesired effects.

You have true kindness hwen you have:

Lack of time and resources

Is it worth to be kind? The Golden rule

This is an excerpts  of my article about kindness at www.kinberg.net/wordpress/stellan/kindness/

“Love your enemies, do good to those who hate you,

28 bless those who curse you, pray for those who treat you badly.

29 To anyone who slaps you on one cheek, present the other cheek as well; to anyone who takes your cloak from you, do not refuse your tunic.

30 Give to everyone who asks you, and do not ask for your property back from someone who takes it.

31 Treat others as you would like people to treat you.”

After telling that it is easy to love who loves you, to give to onr who gives to you, Jesus concludes with.

35 Instead, love your enemies and do good to them, and lend without any hope of return. You will have a great reward, and you will be children of the Most High, for he himself is kind to the ungrateful and the wicked.”

jesus suggested 2000 years ago a revolutionary tactic on how to behave with bad people.

The Tutsis in Rwanda followed Jesus  forgiving the Hutus who killed their relatives and families. And today Rwanda is the Switzerland in Africa. A testimonial of the value of Jesus teaching.

I would love if the people on my Island Lipari could do the same getting rid of old rage and spend their energi cooperating instead of fighting each other. Lipari could like Kigali become the Bahamas of the south Mediterranean.

Stefan  said in his Ted that the meaning of life is relationship. Relationship is of course important. But listen to Emely Esfahani in her ted from 2017 According to her research these are the pillars of Meaning of life:

Stefan talks in this chapter about

Effects of being kind
Stefan says among others this intresting comparison: “Doing a good thing gives the same pleasure as a drug. You can stop taking drug and start making good things and get the same good feeling.”
This reminds about the advice to a alcoholic to read the Persian poetry translated into Swedish by Eric Hermelin.  “Persian poetry is stronger than alcohol”