I calledmy Genesis “the enlightened-genesis” before. But this title is too provocative for especially some Christians and Hebrews.

I hope that this page gives you a satisfying introduction of my Genesis 2000AD.

Religion without science is blind
but
Science without religion is lame.

Many of you humans who have been able to attend school you have now may be the basic knowledge in chemistry,  physics, biology,  paleoanthropology, and mathematics to understand my Genesis.

Click here if you want to skip this presentation
and read it now.

I came to writing my Genesis following three paths:

Here in this section, I deal with the and interreligious path.

Jesus invited the disciples to eat bread and drink wine at the last supper. Have you ever thought why Jesus said about the bread

‘This is my body given for you; do this in remembrance of me.’

“The disciples were as astonished as the Jews in Capernaum. But they did for sure not foresee Jesus sacrifice at the pole and its purpose.  They would have otherwise talked about that instead of wondering who was the one to betray Jesus.

I thought for years what I was eating every Sunday Catholic Mass until a Pantheistic view was born in my mind. How can that bread be Jesus and God? What did Jesus tell with this bread and wine metaphor?

Important about pantheism: I am not an animist, adoring the Sun, animals or mountains.

I early connected Jesus’ message to Einsteins E=mc2. I thought God is energy and after the Big Bang God partly materialized keeping the Spirit, into the Quantum strings/particles and the Universe with all its stars, planets, creatures, and human products, like bread and wine….

Despite being challenged by Jesus’ speech in Capernaum (John 6:35-59). I am still not excluding a pantheistic view. Also, the stoics and Spinoza walked on this path.

To test this view, I decided to make a few revisions to my enlightened Genesis.

Spinoza’s view of the Universe

In Ethics, Spinoza demonstrated that the world is not the incoherent compound of a finite set of simple or compound bodies of which only a few would be aware:

An imperfect body that is a natural  history museum

If God created our body in the beginning why did God create it with imperfections and useless functions some of them even causing illnesses?

In my agnostic and pluralistic hypothesis of the humankind evolution, I integrate

The discrimination of women that was part of the ancient cultures, became a dogma thanks to the Bible Genesis Creation story. Its translations were made by men that thought themselves as “inspired by God”.

So God, in Genesis (1-2) called Elohim, became masculine “He”. Paul used the Genesis Creation story to “prove” that the woman should stay at home, as I wrote about in www.kinberg.net/wordpress/stellan/2018/03/15/silent-women/ The macho clerics obviously later could not allow women to become priests despite many women superiority. And during the witch hunt, many women died with the suspicion to be cooperating with the devil (as Eve did in Genesis misleading Adam)

Adam a bad example for man

Adam as he is described in the original Genesis was not an example of a leader that was intellectually superior to Eve. Eve was fooled by the devil, but Adam acted before thinking. I want to emphasize this in my Genesis.

page 37: Giordano Bruno prayer in his last diary was:

I beg you God, pronounce once again ,
in the darkness of this Earth,
may it even be after my death, your powerful verb:
May it be light!

I hope I will help to give some light as Giordano Bruno prayed for. This was the main reason I chose to give my Genesis the name “Enlightened Genesis”. I hope Filippo Giordano Bruno will find it enlightened. (Read more about Giordano Bruno in a separate post.

Parts of my Genesis are inspired by the Scientific hypothesis still not prooven like the Pebble accretion formation model of Earth I use in the Creation of the Solar system and Earth section.

the validity of my hypothesis (that evolution developed billions (maybe a trillion) of species) is a better description of what we can observe than the non-validity of the hypothesis (that God created all billions of species existing today, among others  350,000 species of beetles  and 8500 worms “the first six days” and then had these loaded on Noah’s ark.)

With this Genesis, I upgrade God and Jesus to be much more than artists and magicians.

I have like Einstein an “unbounded admiration for the structure of the world so far as our science can reveal it” and I understand it.

God and Jesus did

In the Bible and the Quran, you frequently read “We did” instead of “I did”. While Muslims clearly say “God is one” despite the “We did”, the Christians adopted the idea of Trinity like God would be Three things.   For me, Jesus (in Arabic Isa) was created by God first of all. God and Isa then created the plan to create an image of God, together.

The name of God.

In Psalm 83 the name  of God was originally  written with the four hebrew  consonants  YHWH :

“Many monotheist believers know that you God, whose name was written as YHWH, “you alone are the Highest over all the earth.”

No one knows the exact pronunciation of the four consonants YHWH. Instead of writing the correct YHWH name, I  prefer to use the gender-neutral and most accepted name “God”.

In New International Version (NIV), the four consonants are translated into “the Lord” as God would be a man like in many paintings. Jesus often called God with the name Elohim in Hebrew/Aramaic or with the metaphor “My father” probably protecting Mary from accusations for adultery. In e.g. Genesis you read “He called” “He separated” where “He” is a misleading translation from the original Hebrew text “Elohim”. God is not a person and does not have a gender.  It was for a reason one of the biblical and quranic laws was “Do not make idols or set up an image” like e.g. Michelangelo did in his “Creation of Adam“.

God, being an all-knowing God,  knew that Adam was to become a wrong-doer. Like children learn to go by falling and staying away from fire getting hurt, so homo sapiens to become images of God, have to make mistakes, be led by God through messengers to behave like good humans. So humans have to suffer to develop empathic intelligence and learn to love.

At the end of this page, you find the biblical scripts written in the New International Version and verses from the Quran I have taken inspiration from these.

We can not prove that a Creating God really exists. We can not see the invisible. So we can only feel about and believe in God.

The Buddhists say that the existence of God is not an interesting issue. It is more important how you behave. But if you are trying to know about a Creator read Romans 1:20-22:  “For his invisible qualities are clearly seen from the world’s creation onward,“

As written in Quran 29:20 paleoanthropologists and Darwin did

( “Travel through the land and observe how He began creation. Then Allah will produce the final creation. Indeed Allah, over all things, is competent.”

My scientific and interreligious path

The title and subtitle of my grandfather’s book were “How did the world and humankind arise?” and “Did God create the world from nothing?  Did Adam and Eve have ancestors?”

1. How did the Universe and the human being developed
2. Did God create the world from nothing?
3. Did the first human beings, Adam and Eve have ancestors?

I love Einstein’s quote about Science and Religion and their mutual dependencies:

During this search, I found this Einstein quote. True or not I liked it. 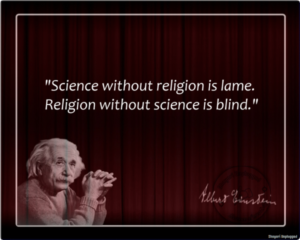 Inspired by Einstein’s quote I started to search for possible answers to my grandfather’s questions. I documented my findings in this page. With Quantum physics I found the explanation to many theological mysteries. Studying the Creation as it is described by Science, I got a different picture of the power of a Creator.

I decided to do the same as my grandfather. But following Einsteins’ quote above, I included the readings of the Bible Genesis and the Quran Creation Surahs in my Scientific search. My search ended writing an enlightened Genesis. I wrote this Genesis as it could have been written with the knowledge, theories and hypothesis of our time. My Genesis is a parascientific idea and hypothesis of a continuous Creation process that integrates Christian and Muslim believes. A unified creation theory. As said above, my Genesis became my final answer to my grandfather’s three questions.

Filippo (Giordano) Bruno inspired me to choose this adjective. He said in prison frustrated about the mind darkness and ignorance of clerics geocentrism of his time:

I beg you God, say once again over the darkness of this Earth even long afer my death, your powerful verb:

“Let there be light!”

I have for a long time seen the old Genesis Creation story as a metaphor about the Creation where a humble God tells Moses about its Creation as something made without much planning as made by an artist and magician.

“Bible scholars believe that Genesis and the Pentateuch were written by Moses, under the inspiration of the Holy Spirit, during the forty years that the children of Israel wandered in the wilderness” ( 1450 – 1410 B.C.)  (Source: www.allaboutcreation.org/   )

I think that 3400 years ago. it was for God important to tell Moses a story that was easy for him to understand and remember and share to the people of his time and for future generations. If it was to be written today, God should for sure have used a different language and approach, an approach that would avoid the confusion and conflict we see today between evolutionists and creationists.

For me and some others, Scientific observations and a belief in a God creator can coexist. The recent discoveries in and understanding of Quantum physics seems to help out with this coexistence. The Vatican is now opening up for a scientific, religious dialog.

read more about this dialog on my page about faith and science.

.
Contact me
Thank you for having read this page. If you think you have something important to add,  e.g. an interesting verse that supports my pluralistic hypothesis, contact me below.   Welcome to this project!