A introduction part 1 of electromagnetism is made here:

s the voltage across the device 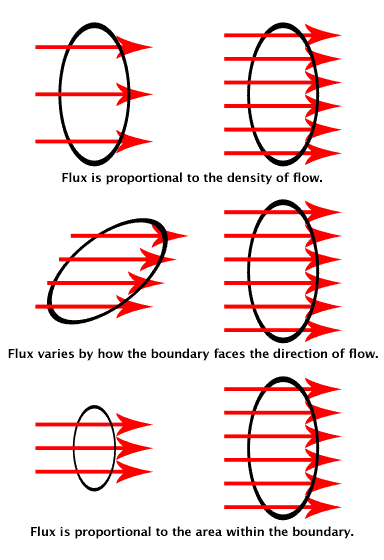 Maxwell came up with the right hand rule (or cork screw rule) to find out how magnetic field goes around a piece of wire with a current in it.. Khan academy presents this law here:

is a surface integral over the surface Σ,

The universal constants appearing in the equations (the first two ones explicitly only in the SI units formulation) are:

In the differential equations,

Calculates the probability for a particle (e.g. electron) to be in a certain position. Is share by Brian Green in this World Science Festival video.

presented in one dimension in this image fom Ul Islam from quora: 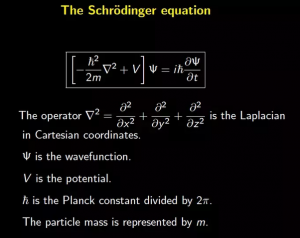 It is all about finding the different energies that a particle can have.

We’re looking at things that can have more than one answer! You might have studied in high school that atoms have energy levels. The Schrödinger’s Wave Equation lets us calculate what these energies are.

Let’s start with thinking what is Kinetic Energy…

It is defined as:

It turns out, talking about velocity isn’t very useful. So, we change this equation to make it depend on momentum p

We can think of particles as waves, atleast at tiny scales where we need to use Quantum Mechanics!

To help us move between these 2 ways of thinking about matter, we can use De Broglie’s Equation

is the Planck constant,

is the rest mass,

is the velocity and

is the speed of light in a vacuum.”

This theory set the basis of wave mechanics. It was supported by Einstein, confirmed by the electron diffraction experiments of G P Thomson and Davisson and Germer, and generalized by the work of Schrödinger. ( Wiki )

Now we don’t see matter around us in our everyday lives to be behaving like waves because Plank’s Constant h is absolutely tiny! ( h=6.62×10−34m2Kg/s )

But hold on! De Broglie’s Equation is useful when we are dealing with minute particles like protons and electrons 🙂

Now, it is going to be useful to talk about ℏ and the wave number instead of h and λ…

is the wave number. We did to avoid having 2π running around in our equations. It just turns out to be easier to work with!
We also know that k is change depending upon the energy. Since k depends only on λ , the factors that can affect λ can also affect k . In this case, it is Energy!

We use Wave Functions to encode information about waves. These are just equations with a few special properties. They look something like this…

Here’s the reason for writing this in this weird format…

This type of problem is called an Eigen Value Problem.

is called an Eigen Function.

Eigen Function of operators are functions which return themselves and a new Eigen Value after the operator is used on them.

As you might have guessed by now, on differentiating this we get the same thing back multiplied by some constants (differential of the argument)

Let’s do this again! 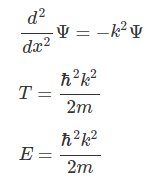 So on putting it all together we get…

Notice it is partial derivative instead of the usual one. This just means that there is more than one variable in the function we treat as a constant when differentiating.

What we just did is valid for a one dimensional particle that is time independent and is not in a potential.

Let’s generalize this equation a little…

We’re now gonna assume it to be true for particles. It turns out to be a good assumption…

We know that there is gonna be a set of energies so we want to know the Eigen value equation.

This time we’ll find an EE by generating an ωω

Let’s look at the wave function to do that…

As you might have guessed it by now, we’re gonna take the derivative with respect to time to pull it out front!

And that’s same as the equation we had before…

Please note that this equation is only for one spatial dimension! But we need to consider all 3 dimensions. The three dimensions in Cartesian Coordinate System are orthogonal to each other. That means, they will not interfere with each other.

Each of these contributes to the total energy.

So, in three dimensions, the time dependent wave equation becomes…

And the time independent version becomes…

This can more simplified as…

Where ∇∇ is what we call Nabla.

where Ĥ  is what we call Hamiltonian.

First part copied from my page at www.kinberg.net/wordpress/stellan/einsteins-field-equations-of-general-relativity/

As is correctly explained in Wikipedia

I found this Youtube that explains the general relativity field equation. I like it because of the good graphic representations.

As with the tensor youtube made by Dan Fleisch, this made by Eugene Khutoryansky show graphically how a tensor change depending on curvature of space. Very well done video.