I am fighting to reach the next level of math, the one used by Einstein’s general relativity. It is said that no one really understands the equation. But I want at least to have a basic understanding of the language used in the equation. I understand it is about multidimensional tensors. I have to let my brain get used to it. And it takes time, having to listen several times to the same lesson

To understand EFE and especially its derivation, it is important to have good knowledge about: 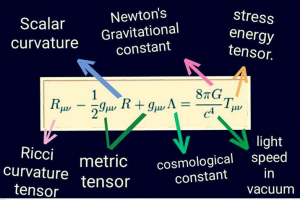 This is Einstein’s field equation (EFE) in simplified form. It is called Einstein Field equations as it is really 16 equations depending on the value of the indices (μν) for g and T in the equation. 6 are duplicates. (read more below)

As is correctly explained in Wikipedia

The combination of mu (μ) and nu (ν) means that
there are 16 variations of this equation with mu (μ) and nu (ν) having numbers between 0 and 3. You might therefore think that there are 16 equations in four-dimensional space-time but in fact 6 of them are duplicates so in fact, it reduces to 10 so you are looking at 10
Einstein field equations.
“The whole point about this equation is that it balances two things:

and as some people have some sometimes helpfully said that:

I found this youtube that explains the general relativity field equation. I like it because of the good graphic representations.

As with the tensor youtube made by Dan Fleisch, this made by Eugene Khutoryansky shows graphically how a tensor change depending on curvature of space.

Einstein followed his friends Grossman’s advice in 1912 to study Riemann geometry (“Albert Einstein” written by Vincenzo Barone, page 61). It looks like I have to deal with Riemann´s geometry and math too to get closer to the math in the field equation. I have started a post about this issue. Click here.

I follow in this page DrPhysicsA lesson. He recommends listening to Stanford Leonard Susskind’s Lectures. Here is his lecture 1 that he calls
“Quantum physics for old people”

Good luck with following DrPhysicsA. He is a very good teacher:

DrPhysicsA recommends to listen to Stanford Leonard Susskinds Lectures. Her is lecture 1 he calls
“Quantum physics for old people”

Walking in x or y direction 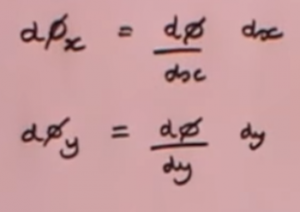 dΦx is the change in height if you move in the x-direction.
dΦ/dx is the gradient in x-direction
These two equations can be used to calculate dΦs for the resulting vector s as shown below. 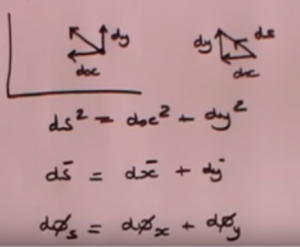 I were confused of his using ϕ (capital phi) in the same way as dh where h=height in the field. I understand that dϕxis a movement in the field that is  parallell to the x axes. 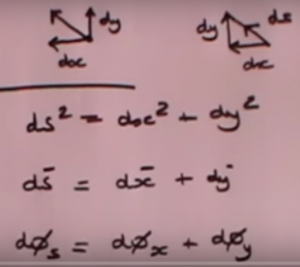 With Pythagoras we get a formula for 2-dimensional vectors like ds in the image above.

The term “Partial derivative” has confused me with its new symbol ∂(curly d).

This is a difficult move. having been used to the coordinates xyz it was confusing to relabel xyz. It took me a few weeks to get used to this new coordinate system.  As Newton did, I had to scroll back a few times.

x0 is used for time coordinate.

Relabeling xyz  is necessary to be able to have more coordinates as in e.g. a 11 dimension system .If you are not used to it, you get rather confused with the following calculations. So I keep this screenshot here as a memory backup.

With the new coordinate system this equation

can be rewritten as

where n is the indeces for the x coordinates.

IMPORTANT! The y-coordinate will still be used but for another set of coordinates/frame of reference.

See the image below where a point P can be described 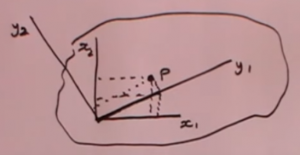 DrPhysicsA application of the Chain rule.

To calculate all the gradients in the y-frame reference, we must  us to use the chain rule with Leibniz’s notation. Read more about this in my equation page.

find all the gradients in the y frame of reference

The chain rule is used as this screenshot shows: 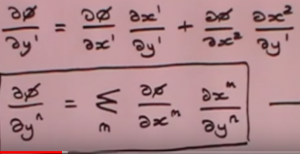 I wrote about tensors in another page. But as a repetition, I share here Dr Physics explanation:“Let me start off by talking about a scalar. A scalar is something that has magnitude but no direction. Temperature would be a good example of a scalar. It just has a value 32 degrees centigrade.
A scalar is what’s called a tensor of Rank 0.
Now consider a vector. A vector of course has magnitude and direction so it has a length and it has a direction which is often described as the angle to one of the axes in this case to the x-axis. A vector is described as a tensor of Rank 1 “

We take the function of Φ

and make a slight adjustment to it. We get

A vector in the x-frame reference Vxm with 2 coordinates (1 and 2 as we talk about a 2 dimension system)  transforms to a vector  in the y frame reference by multiplying that vector with the  2 gradients in the y-frame reference. 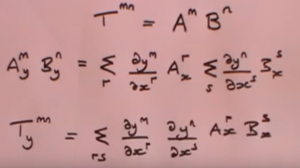 Txrs is the tensor in the x-frame of reference.

This is the contravariant transformation, that is the

The covariant transformation is made with this equation: 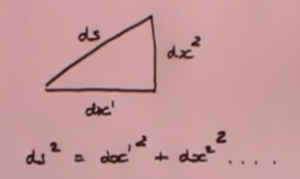 δ that is called Kronecker delta

With Kronecker you get

Pythagoras can now be rewritten as 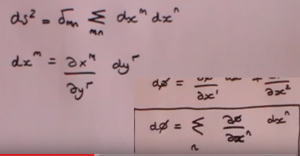 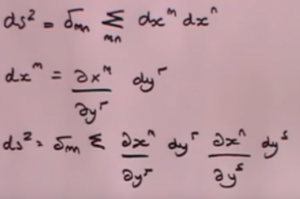 49:21 With gradients together we get the Metric tensor Gmn

The kronecker delta δmn (that is 1 if r=s) in the metric tensor gmn makes the metric tensor become a device that makes correction to pythagoras so the equation becomes valid in flat space as well in curved space.