I have done  rapid Covid test here in Italy.

These Rapid tests are used in Italy according to pagellapolitica.it :

These are mainly antigenic tests. I never got information which of these were used here with me.

pagellapolitica.it writes about unreliabilities in the results. Like my result could be a false negative result. I read about that before.

I got terribly confused reading news around the world. Like

www.nepalitimes.com that writes “Nepal’s decision to use rapid diagnostic kits for mass testing may actually be putting more people at risk” writes  Nepal should have gone directly for PCR like Korea and other countries instead of RDTs.“

I decided to figure out what rapid test (RDT) really are and why there and risc for false results and when..

A doctor of Spalanzani in Rome confirm that these 3d generation rapid tests are now secure.

PCR and Antigen Testing in COVID-19

Antigen tests While molecular tests can be performed in real-time, supply chain and throughput challenges have made this unrealistic during the COVID-19 pandemic. Implementing antigen testing in the COVID-19 testing algorithm could reduce strain on laboratories and reserve molecular testing for situations where high test sensitivity is required. The advantages and disadvantages of antigen testing for SARS-CoV-2 need to be considered to determine if and when it is a reliable method for COVID-19 diagnosis.

Each test for Sars-CoV-2 – be it molecular, serological or antigenic – has in fact two main characteristics: sensitivity and specificity.

Sensitivity corresponds to the proportion of positives to the new coronavirus correctly identified as such: the higher the sensitivity of a test, the lower the likelihood of incurring false negatives (i.e. people who according to the test are not infected, but who in actually they are).

Specificity, on the other hand, corresponds to the proportion of negatives that are correctly identified as negative for the virus: the higher the specificity of a test, the lower the probability of incurring false positives (i.e. people who according to the test are infected, when in reality they are not I am). Read more in pagellapolitica.it

I found two youtubes that partially explains the risks of false results.

To understand the unreliability of covid 19 testing it is important to understand how the body react on a virus infection like corona infection.

To explain this, Daniel Lewis Gerard Medinger uses information from aForbes article was published on May the 27th written by William Haseltine

What is this myeloid response?

Myeloid cells is the collective name of Granulocytes and Monocytes. They are differentiated descendants from common progenitors derived from hematopoietic stem cells in the bone marrow.  ( www.sciencedirect.com )

What is it that the SARS-virus is doing differently than other coronaviruses to have this effect?

A hyperactive myeloid response, on the other hand, can result in the famous cytokine storm associated with the rapid decline and death of Covid-19 patients.” ( www.forbes.com )

In dampening the antibody response to infection and ramping up production of chemokines, SARS-2 is amplifying what happens to us naturally as our immune systems age. While our ability to mount an effective antibody and T cell response to new infections declines, the myeloid arm of the immune system becomes overactive. These features of the aging immune system account for both the decline in our response to new vaccines and to an increase in inflammatory auto-immune diseases such as rheumatoid arthritis. ( www.forbes.com )

To my feeling is that this is what we’re seeing with the people out there the one in ten still suffering brutal fatigue well after a covert infection and potentially the long tail of symptoms to all seems to kind of make sense right. But science needs more than just sense it needs evidence.

Does this mean that elder people may be more easilty get false negative serologic RDT result? 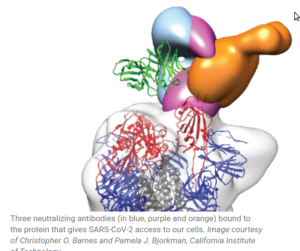 “The majority of the samples they have studied showed poor to modest “neutralizing activity,” indicating a weak antibody response. However, a closer look revealed everyone’s immune system is capable of generating effective antibodies—just not necessarily enough of them. Even when neutralizing antibodies were not present in an individual’s serum in large quantities, researchers could find some rare immune cells that make them

… In 33 percent of donors, the neutralizing activity of plasma was below detectable levels. It’s possible that for many in this group, their immune system’s first line of defense had resolved the infection quickly, before the antibody-producing cells were called in.” (Read more in www.rockefeller.edu )

Let’s look at the accuracy of the two primary antibody tests being done in the UK the Abbott test and the rosh test.

but the sensitivity not so much 93% this means that there is a significant risk of false and negative ie if your test comes back negative.

picture starts to emerge just a question of waiting for the data until then if you’ve got any antibody test result stories you’d like to share then that starts a discussion in the comments and perhaps we can start to get a slightly fuller picture till next time.