At Catholic Mass, Lc 1,39-56 is read. Maria encounters her cousin Elizabeth. who has John the Baptist in her womb.

Pope Francis talked about Marys’s humility and made me think about Jesus’ relation to women, his mother, Marta mong others.

Despite Jesus talks about God, his father.

“God is more mother than father.
This is why a mother brings us closer to God”

All historical facts (the story of Jesus in the temple) say that Jesus was a man. But his  reasoning and attitude toward women, led me to give the provocative title to this post.

( N:B. The Bible texts are taken from
https://www.vatican.va/archive/ENG0839/_INDEX.HTM
Gospel texts below are copied from christianwritingtoday.com/free_downloads/WebNT_CWTedition.pdf )

1:39 Mary arose in those days and went into the hill
country with haste, into a city of Judah,
1:40 and entered into the house of Zacharias and greeted Elizabeth.
1:41 It happened, when Elizabeth heard Mary’s greeting, that the baby leaped in her womb, and Elizabeth was filled with the Holy Spirit.
1:42S he called out with a loud voice, and said, “Blessed are you among women, and blessed is the fruit of your womb!
1:43 Why am I so favored, that the mother of my Lord should come to me?
1:44 For behold, when the voice of your greeting came into my
ears, the baby leaped in my womb for joy!
1:45 Blessed is she who believed, for there will be a fulfillment of the things which have been spoken to her from the Lord!”
1:46 Mary said, “My soul magnifies the Lord.
1:47 My spirit has rejoiced in God my Savior,
1:48 for he has looked at the humble state of his handmaid. For behold, from now on, all generations will call me blessed.
1:49 For he who is mighty has done great things for me. Holy is his name.
1:50 His mercy is for generations of generations on those who fear him. 1:51 He has shown strength with his arm. He has scattered the proud in the imagination of their hearts.
1:52 He has put down princes from their thrones. And has exalted the lowly.
1:53 He has filled the hungry with good things. He has sent the rich away empty.
1:54 He has given help to Israel, his servant, that he might remember mercy,
1:55 As he spoke to our fathers, to Abraham and his seed forever.”
1:56 Mary stayed with her for about three months, and then returned to her house.

Are Mary from the tribe of Judah and Elizabeth,
the mother of John the Baptist, related?

Luke 1:5 says:
“There was in the days of Herod, the king of Judea, a certain priest named Zacharias, of the priestly division of Abijah. He had a wife of the daughters of Aaron, and her name was Elizabeth”

Elizabeth was of the “daughters of Aaron” (Luke 1:5, (that is, descended through Moses’ brother, Aaron, from the Jewish tribe of Levi (Exodus 6:20) (one of the twelve sons of Jacob, or Israel)), while Mary was from the tribe of Judah (one of Jacob’s other sons, as well as Levi’s full brother, since they had the same mother and had descended from Judah through David. (Source: ebible.com)

The Greek term ‘syngenis, simply means “relative” (NKJV, NASB, NIV) or “kinswoman” (ASV, RSV). It is a general term, meaning ‘of the same family.’ Thus, Mary and Elizabeth may have been first cousins, or they may have been fourth cousins. All we know for sure is that they were kin.

I made myself this genealogy tree: 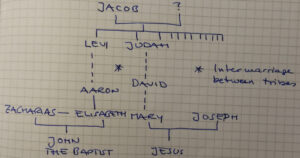 I find that Jesus indeed was cousin of John the Baptist.

1:56 Mary stayed with her about three months, and then returned to her house.

How difficult isn’t it to be humble especially when one humiliates you. Pope Francis made me think about this. Next time I am humiliated, I must do my best to control myself. The reading of today made me update http://www.kinberg.net/wordpress/stellan/god/

With his speech I got to know about Pope Lucianis speech that got me back on my thoughts why God is depicted as a man.

You must register to be able to comment or you can find me on Facebook. You are welcome to contact me there. Send me a message and present yourself and I will be pleased to talk with you about this and other issues.

Have a good day.

looking at old posts in my site visible in Google, I found this old article from 2007 site http://www.kinberg.net/wordpress/stellan/2007/10/01/nessun-dorma/. I saw again Paul Potts tonight. Paul Potts video has been seen by 232 millions. It made me have a few tears.

I found now that Paul has  been surpassed by Susan Boyle whose video has been seen by mor than 233 million times. Again tears.

is there a more powerful voice around than this SINCE 92, Mexican singer Monica Naranjo?

Lookin at my hearing Cathegory posts (look for hearing under the menu option above) I decided that Monica Naranjo was missing.

Looking at the posts in missionecattolica  I discovered this photo

I remember these two great tango teachers who came to Göteborg in Februar 2012. They came afterwards to the chapel 20120212.

Looking around I found a promotional video they made.

On Santa Lucia day, New York Times published an article with the same title. It contains a video telling about the events of this autumn starting with the V-day. Click here…

Napolitano went to the office of New York Times Editor to complain. He told in other words that the journalist must be blind that only sees shades. “A journalist with eyes sees also the light“. Click here…

According to the italian financialÂ  newspaper “Il Sole 24 Ore” (sponsorized by the government, as most Italian newspapers are.) Napolitano sayd that what was said in NYT about Italy is idiocy. Click here…

But the voice of Napolitano is not the only one. Other politicians, like Veltroni, agree with the article of NYT.

It's strange the feelings you can get from musical performances. Music even without text, is a very deep way of comunicating and sharing feelings. One of my young students, Nermin, shared me tonight on MSN, the name Jake Shimabukuro. After a huge amount of work and miles of depressing blogs about mafia , corrupted politicians and shit (sorry friends about that), this was very welcome: