I decided to separate the Arabic alphabet, sign and math parts from this main page as the main page became to big and slow to load. You find the Arabic pages now at:

You find them all in the top menu under Learn – Arabic.

The reason I decided to start learning Arabic are two:

To my first help I found Maha, a Palestinian Christian girl who had made several good lessons on Youtube. Thanks to her I can understand the Arabic letters in the Quran.  But it takes long time to be able to read and understand talked Arabic.  But with perserverance one makes some progresses.

I like the way she teaches how to write the Arabic letters. Here is video one.

Arabic words in other languages

<i discovered that Swedish Akta is very similar to a Arabic word.

I asked in a comment on her video if someone knows

“Thank you for your nice lessons. I discovered another Swedish word that may come from arabic. I discovered “Akta” <(Be careful) in your 12 userful phrases lesson and “Han” (He) and “hon” (her) in the bible sirian version about the story about Peter, the corner stone (Kifahu or in arabic Quufa hu) . Corresponding arabics are ihthar, ha and hu. Intresting is that the vikings had contacts with the arabic world in Iraq (?) and in Sicily and Spain an may have imported words they learned from arabs.”

“It is believed the Swedish Vikings traveled south through Russia many years ago and reached Arabic speaking countries. A film whose name I dont remember, tells about Viking leaders consulting Arabic speeking wise men to solve issues in the North. Normand were also in Sicily that was a islamic region speaking siculo arabic once in a time. Just speculations and no scientific proof. ) Share with me if you find prooves. Have a good peaceful day. And Asalam alaiki.”

I got answer from Amer:

“Sure . there is an Arabian- Muslim scholar and traveller called by a name ; Ahmad bin Fadlan (from the Abbasid middle period) who wrote about his long time journey to Russia- Viking area .” with these two good links.

I found the film the 13th warrior with

Take a bath in Swedish is “bada”. The intresting thing is that Sea in Arabic is Bahr (Bahar) that is very similar to “bada” or English “bath”. 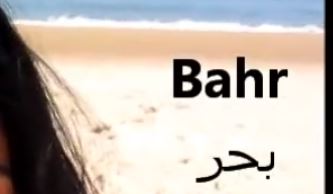 If I will be able to come to Israel, I want to be in Iqrit at Easter. This video Maha made ill explain you why.

After 6 months trying to learn Arabic, i have given up the idea to be able to talk Arabic one day. But I still do my best to be able to read the  Quran. I am now also making Salat as you can read in  http://www.kinberg.net/wordpress/stellan/2018/08/01/praying-like-a-muslim/

As you may have understood I am a pluralsit so I pray with Muslims and with Christians.