April 4, 2021 Gv 20,1-9 is read. It is about Mary of Magdala (Mary Magdalene) who discovers the empty tomb and informs the disciples about it. While the disciples went home after having seen the empty tomb, Mary remained at the tomb. She clearly shows embodiment of Christian devotion and love.
Jesus chooses Mary as his first 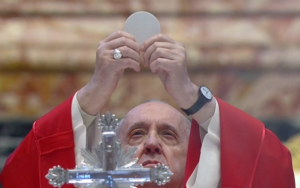 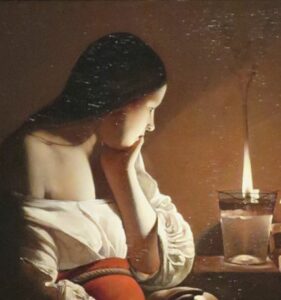 20:1 Now on the first day of the week, Mary Magdalene went early, while it was still dark, to the tomb, and saw the stone taken away from the tomb.
20:2 Therefore she ran and came to Simon Peter, and to the other disciple whom Jesus loved, and said to them, “They have taken away the Lord out of the tomb, and we don’t know where they have laid him!”
20:3 Therefore Peter and the other disciple went out, and they went toward the tomb.
20:4 They both ran together. The other disciple outran Peter, and came to the tomb first.
20:5 Stooping and looking in, he saw the linen cloths lying, yet he didn’t enter in.
20:6 Then Simon Peter came, following him, and entered into the tomb. He saw the linen cloths lying,
20:7 and the cloth that had been on his head, not lying with the linen cloths, but rolled up in a place by itself.
20:8 So then the other disciple who came first to the tomb also entered in, and he saw and believed.
20:9 For as yet they didn’t know the Scripture, that he must rise from the dead.

Pope Francis does not mention Mary in his Easter message but focuses on the Hope that Jesus gave us with his resurrection.

To understand the importance of Mary Magdalene, I think it is important to read what happened there after:
John 20.10-

20:10 So the disciples went away again to their own homes.
20:11 But Mary was standing outside at the tomb weeping.  So, as she wept, she stooped and looked into the tomb,
20:12 and she saw two angels in white sitting, one at the head, and one at the feet, where the body of Jesus had lain.
20:13They told her, “Woman, why are you weeping?” She said to them, “Because they have taken away my Lord, and I don’t know where they have laid him.”
20:14 When she had said this, she turned around and saw Jesus standing, and didn’t know that it was Jesus.
20:15 Jesus said to her, “Woman, why are you weeping? Who are you looking for?” She, supposing him to be the gardener, said to him, “Sir, if you have carried him away, tell me where you have laid him, and I will take him away.”
20:16 Jesus said to her, “Mary.” She turned and said to him, “Rabboni!” which is to say, “Teacher!”
20:17 Jesus said to her, “Don’t hold me, for I haven’t yet ascended to my Father; but go to my brothers, and tell them, ‘I am ascending to my Father and your Father, to my God and your God.’”

Mary Magdalene is mentioned in all Gospels.

John 19:25 But there were standing by the cross of Jesus his mother, and his mother’s sister, Mary the wife of Clopas, and Mary Magdalene.

20:1 Now on the first day of the week, Mary Magdalene went early, while it was still dark, to the tomb, and saw the stone taken away from the tomb.

The disciples went home (John 20:10) but Mary remained at the tomb.

Jesus appeared to her and talked with her.

John 20:18 Mary Magdalene came and told the disciples that she had seen the Lord, and that he had said these things to her.

Matthew 27:61 Mary Magdalene was there, and the other Mary, sitting opposite the tomb.

Matthew 28:1 Now after the Sabbath, as it began to dawn on the first day of the week, Mary Magdalene and

Mark 15:47 Mary Magdalene and Mary, the mother of Joses, saw where he was laid.

Mark 16:1 When the Sabbath was past, Mary Magdalene, and Mary the mother of James, and Salome, bought spices, that they might come and anoint him.

Mark 16:9 Now when he had risen early on the first day of the week, he appeared first to Mary Magdalene, from whom he had cast out seven demons.

Luke 24:10 Now they were Mary Magdalene, Joanna, and Mary the mother of James. The other women with them told these things to the apostles.