I saw a documentary in Swedish svtplay.se, about a famous Viking woman called Gudrid_Thorbjarnard I wanted to dedicate a page to this woman.

As I have written about other women on my site, I decided to add space to other famous women as well in this page. So this page became a page about famous women. And it became an opportunity to think about my own origins.

It was one of my goals as a teacher in Sweden, to get more girls taking over typical works of men. I had a girl tech team helping building computers for our school computer club in the 90s. Several of my technique students were girls. They learned HTML and created my school’s home page 1997. Look at this page created by Elena and Linda. Two of my student girls, became pilots and one became a civil engineer specialized in quality industrial development. I am proud about that, a little bit as Gudrin’s father was proud about Gudrin and I am proud about my daughter and son.

About my interest in the Vikings.

My parents were travelers and one of my ancestors (Johan Gustaf Hjalmar )  was doctor and discoverer. That’s probably the reason, I grew up in Italy, instead of in Sweden. l almost became an Italian man who all his life, back working in Sweden, wanted to come back to an island similar to the volcanic Iceland, in Italy.

As a Viking, living in Sicily that once ruled by a Viking. I am of course interested both in the history of Sicily and the Vikings.

The recent discoveries about the norsemen

I have for long known about the Vikings, coming to North America 500 years before Colombo. But only now, thanks to the Internet, I have found information about the recent American research of the Norsemen, who came to north America. I am very thankful for the documentary in Swedish svtplay.se about Gudrin.

Wiki says among others that she was:
”

“an Icelandic explorer, born at Laugarbrekka in Snæfellsnes, Iceland. 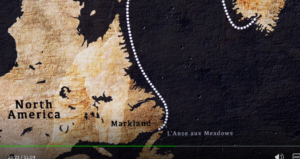 She appears in the Saga of Erik the Red and the Saga of the Greenlanders, known collectively as the Vinland sagas. She and her husband Þorfinnur Karlsefni, led an expedition to Vinland where their son Snorri Þorfinnsson was born, believed to be the first European birth in the Americas outside of Greenland. 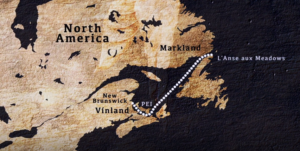 Gudrin and her husband Þorfinnur Karlsefni went to Winland and took over the abandoned settlement of Leif_Erikson, the older brother of Karlsefni, goday called l’anse aux Medows.

In the Swedish documentary, we listen to  Birgitta Wallace.

Nancy Marie Brown, who wrote the book “The saga of Gudrid – the far traveller” tells about her book in this youtube:

With this pag and research, it has become a dream of mine to met with the Mikmaq Indian people. 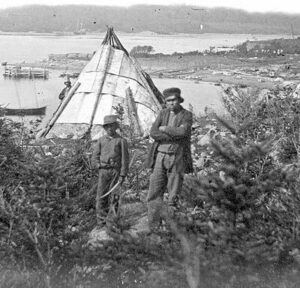 Because of  my interest and engagement in the North American Indians tragic destiny, my mother once said:
“You have for sure been an Indian man, in your previous life.”

Mikmaq Indian people maybe interbreeded with the norsemens? This is contradicted by what is know, as Gudrid and their group left Winland soon after a fight started with the natives.