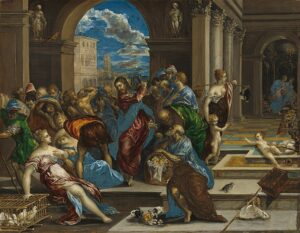 (Image by El Greco with oil on panel, copied from Wiki)

John said that “oxen, sheep, and doves” were sold in the temple were sold. Luke and Mark did not mentions any animals. Matthew mentions only doves. But to understand Jesus reaction, maybe other things were sold too.
If only oxen, sheep, and doves were sold, Jesus should have known that Hebrews had to change their money to be able to buy these animals, to offer to God. Jesus should then have said something about this to the Hebrews in the temple.

Matthew, Mark, and Luke agree that this is the event that functioned as the ‘trigger’ for Jesus’ death.” ( web.archive.org )

I wonder about Jesus’ wrath in the temple. I wrote about hate and wrath back in 2017 in this post. Jesus as a good Jew for sure, knew this text:

“Wrath and anger— these also are detestable,
and they will possess the sinful person.” (Syrach 27:30 )

I have come to a conclusion.

2:13 The Passover of the Jews was at hand, and Jesus went up to Jerusalem.
2:14 He found in the temple those who sold oxen, sheep, and doves, and the changers of money sitting.
2:15 He made a whip of cords, and threw all out of the temple, both the sheep and the oxen; and he poured out the changers’ money, and overthrew their tables.
2:16 To those who sold the doves, he said, “Take these things out of here! Don’t make my Father’s house a marketplace!”
2:17 His disciples remembered that it was written, “Zeal for your house will eat me up.”
2:18 The Jews therefore answered him, “What sign do you show us, seeing that you do these things?”
2:19Jesus answered them, “Destroy this temple, and in three days I will raise it up.”
2:20 The Jews therefore said, “It took forty-six years to build this temple! Will you raise it up in three days?”
2:21 But he spoke of the temple of his body. 2:22 When therefore he was raised from the dead, his disciples remembered that he said this, and they believed the Scripture, and the word which Jesus had said.
2:23 Now when he was in Jerusalem at the Passover, during the feast, many believed in his name, observing his signs which he did.
2:24 But Jesus didn’t trust himself to them, because he knew everyone,
2:25 and because he didn’t need for anyone to testify concerning man; for he himself knew what was in man.

According to John2:20: “The Jews therefore said, “It took forty-six years to build this temple! Will you raise it up in three days?”This time detail seems to be acceptable. 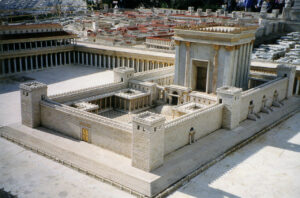 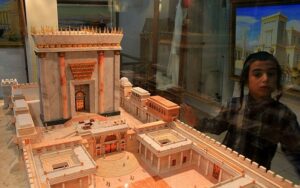 (“A young boy standing next to a model of the Second Temple at the Temple Insititute in Jerusalem. (photo credit: Nati Shohat/Flash90)” Source: www.timesofisrael.com )

The merchandise in the temple explaining Jesus wrath

I  wondered about the message of John who says that “oxen, sheep, and doves”, were sold in the temple. Maybe John’s tradition spiced the story? inspired by Isaiah 56:7 and Jeremiah 7:11

Isaiah 56:7  says:
Them I will bring to my holy mountain and make joyful in my house of prayer; Their holocausts and sacrifices will be acceptable on my altar, For my house shall be called a house of prayer for all peoples.

Jeremiah 7:11 says:
Has this house which bears my name become in your eyes a den of thieves? I too see what is being done, says the LORD.

I made research of the “cleansing of the temple” merchandise details, in the other Gospels.

11:15 They came to Jerusalem, and Jesus entered into the temple, and began to throw out those who sold and those who bought in the temple, and overthrew the tables of the money changers, and the seats of those who sold the doves.
11:16 He would not allow anyone to carry a container through the temple.
11:17 He taught, saying to them, “Isn’t it written, ‘My house will be called a house of prayer for all the nations?’ But you have made it a den of robbers!”
11:18 …

45 And he entered the temple and began to drive out those who sold,
46 saying to them, “It is written, ‘My house shall be a house of prayer,’ but you have made it a den of robbers.”
47 And he was teaching daily in the temple. The chief priests and the scribes and the principal men of the people were seeking to destroy him,

12 And Jesus entered the templea] and drove out all who sold and bought in the temple, and he overturned the tables of the money-changers and the seats of those who sold pigeons. 13 He said to them, “It is written, ‘My house shall be called a house of prayer,’ but you make it a den of robbers.”

Mark who was the first evangelist told only about doves. Luke and Matthew did not mention any animal. James Tissot (French, 1836-1902) interpreted that there were not only animals sold, maybe to explain Jesus’ wrath. 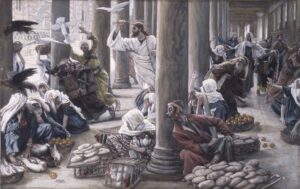 As Mark 11:17 says:
He taught, saying to them, “Isn’t it written, ‘My house will be called a house of prayer for all the nations?’ But you have made it a den of robbers!”
Jesus was a Jew and surely read Jeremiah 7:11, the temple probably hosted merchants who sold other things not intended for offering.

The behavior of Jesus as John describes it, is really surprising.
It is not at all in harmony with Jesus’ message of “love your enemies and pray for those who harass you”  ( Matthew 5:43-44 )

However, it could be understandable if other things than oxen, sheep, and doves were sold in the temple.