His Baptism was also celebrated in the john the Baptist Franciscan church at Qasr_al-Yahud on the Jordan river. 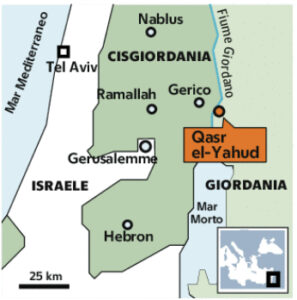 After 30 years of invisibility, Jesus appears as an adult on the river of Jordan to get baptized by John. 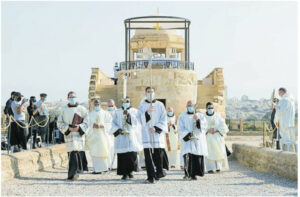 The Gospels are filled with extraordinary sparkling stories, partly inspired by the story of Moses. John avoids for some reason to talk about these 30 years and start his Gospel with the baptism of Jesus. Johns’s tradition probably thought these stories to be without importance and maybe also unreliable despite three others wrote about these years.
I wrote about Jesus first years in several posts:

Jesus talked several times about the book of Jeremiah (Matthew 2:17,27:9) and Isaiah (Mark 7:6, Luke 3.3-4, 4:17, Matthew 4:14, 8:17, 12:17, 13:14, 15:7, John 1:23, 12:38, 12:41, Acts 8.28, 28.25).
He is believed to be God incarnated. But I can not imagine Jesus to having played all his time doing childish miracles with clay or just worked with timber with his father.
he was a Jew and as such he must have attended Torah education.
Luke 2:46 tells that Mary and Joseph” … found him in the temple, sitting in the midst of the teachers, both listening to them and asking them questions.” This story seems reasonable for a young boy interested in religious issues.
What were his thoughts as a young boy and teenager about the prophets Isaiah and Jeremiah? He must have talked about them with his father Joseph and mother Mary.

1:1 The beginning of the Good News of Jesus Christ, the Son of God. 1:2 As it is written in the prophets, “Behold, I send my messenger before your face, who will prepare your way before you. (a)
1:3 The voice of one crying in the wilderness, ‘Make ready the way of the Lord! Make his paths straight!’” (b)
1:4 John came baptizing (c) in the wilderness and preaching the baptism of repentance for the forgiveness of sins.
1:5 All the country of Judea and all those of Jerusalem went out to him. They were baptized by him in the Jordan River, confessing their sins.
1:6 John was clothed with camel’s hair and a leather belt around his waist. He ate locusts and wild honey.
1:7 He preached, saying, “After me comes he who is mightier than I, the thong of whose sandals I am not worthy to stoop down and loosen

Understanding Jesus requires some understanding of the Jewish culture and believes. I think it is interesting to listen to Joe Amaral in this video: