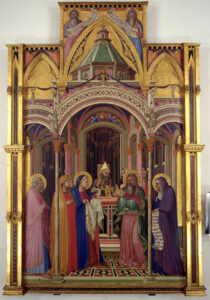 Today Sunday 27 December   Lc 2,22-40 is read. It’s about The first time Jesus visit Jerusalem.
It is in fact Mary and Joseph that brings Jesus to Jerusalem as he is a newborn baby. Luke tells that Jesus was born in Bethlehem. If that is true, the trip was not so long.
If he instead would have been born in Nazareth, the trip would have been 111 km as measured today going by the roads existing today. The trip at that time was probably longer. The question is if all newborn bouys around in Galilea were brought all the way to Jerusalem. If that is the case, they must have been traveling in a bigger group to protect themselves from pirates may be walking along the Jordan to avoid the mountains.
Despite the distances, they were for sure used to travel a long way, riding on donkeys. Maybe achievable by the mothers with their babies safely kept on their chest.

2:22 When the days of their purification according to the law of Moses were fulfilled, they brought him up to Jerusalem, to present him to the Lord
2:23 (as it is written in the law of the Lord, “Every male who opens the womb shall be called holy to the Lord”), (a)
2:24 and to offer a sacrifice according to that which is said in the law of the Lord, “A pair of turtledoves, or two young pigeons.” (b)
2:25 Behold, there was a man in Jerusalem whose name was Simeon. This man was righteous and devout, looking for the consolation of Israel, and the Holy Spirit was on him.
2:26 It had been revealed to him by the Holy Spirit that he should not see death before he had seen the Lord’s Christ. (c)
2:27 He came in the Spirit into the temple. When the parents brought in the child, Jesus, that they might do concerning him according to the custom of the law,
2:28 then he received him into his arms, and blessed God, and said,
2:29 “Now you are releasing your servant, Master, according to your word, in peace;
2:30 for my eyes have seen your salvation,
2:31 which you have prepared before the face of all peoples;
2:32 a light for revelation to the nations, and the glory of your people Israel.”
2:33 Joseph and his mother were marveling at the things which were spoken concerning him,
2:34 and Simeon blessed them, and said to Mary, his mother, “Behold, this child is set for the falling and the rising of many in Israel, and for a sign which is spoken against.
2:35 Yes, a sword will pierce through your own soul, that the thoughts of many hearts may be revealed.”
2:36 There was one Anna, a prophetess, the daughter of Phanuel, of the tribe of Asher (she was of a great age, having lived with a husband seven years from her virginity,
2:37 and she had been a widow for about eighty-four years), who didn’t depart from the temple, worshipping with fastings and petitions night and day.
2:38 Coming up at that very hour, she gave thanks to the Lord, and spoke of him to all those who were looking for redemption in Jerusalem.
2:39 When they had accomplished all things that were according to the law of the Lord, they returned into Galilee, to their own city, Nazareth.
2:40 The child was growing and was becoming strong in spirit, being filled with wisdom, and the grace of God was upon him.

Pope Francis at his Angelus today, interpret this passage as a message about the family.