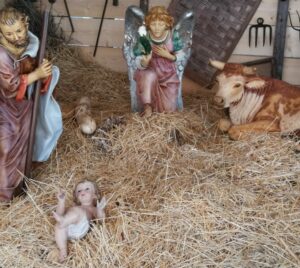 Saturday December 24 Lc 2,1-14 was read. It’s about the story of Joseph and Marys’s trip from Nazareth to Bethlehem and Jesus’ birth in the crib. As I do not believe in this story, I did not write about it on December 24. ii published instead a article about the year and date of Jesus birth.
I changed my mind however after having listened to Pope Francis’s interpretation of the text, I changed my mind. Publishing this article December 27.

Pope Francis concentrated totally meditating on the crib, the place of birth of a poor boy.

Despite Luke may have written this story inspired by the Pentateuch and the prophets, I find it however inspiring that he sees Jesus’ birth in the poorest of places, a manger, and shelter for animals.

The manger story of Luke, inspired pope Francis to a message that he shared during the mass. See below.

Pope Francis has made me reconsider the story I am writing about Jesus’ birth in Nazareth. Yes, I believed for long time, that Jesus was born in Nazareth.

Luke 2,1-14 says:
2:1 Now it happened in those days, that a decree went out from Caesar Augustus that all the world should be enrolled.
2:2 This was the first enrollment made when Quirinius was governor of Syria.
2:3All went to enroll themselves, everyone to his own city.
2:4Joseph also went up from Galilee, out of the city of Nazareth, into Judea, to the city of David, which is called Bethlehem, because he was of the house and family of David;
2:5 to enroll himself with Mary, who was pledged to be married to him as wife, being pregnant.
2:6 It happened, while they were there, that the day had come that she should give birth.
2:7 She brought forth her firstborn son, and she wrapped him in bands of cloth, and laid him in a feeding trough, because there was no room for them in the inn.
2:8 There were shepherds in the same country staying in the field, and keeping watch by night over their flock.
2:9 Behold, an angel of the Lord stood by them, and the glory of the Lord shone around them, and they were terrified.
2:10 The angel said to them, “Don’t be afraid, for behold, I bring you good news of great joy which will be to all the people.
2:11 For there is born to you, this day, in the city of David, a Savior, who is Christ the Lord.
2:12 This is the sign to you: you will find a baby wrapped in strips of cloth, lying in a feeding trough.”
2:13 Suddenly, there was with the angel a multitude of the heavenly army praising God, and saying,
2:14 “Glory to God in the highest, on earth peace, good will toward men.”

Pope Francis does not focus on the many facts told by Luke. Except one, the simple and poor place of his first start, a manger. He sees and shares an important message. God does not value exterior appearances but what you have in your hearth. Jesus was born in love and preached love.

After listening to pope Francis, I  got the hypothesis that Joseph brought Mary after marriage to Bethlehem, maybe sometime after the visit to her cousin Elisabeth, several months before the birth of Jesus.
In Bethlehem, Jesus was born maybe in September while the “shepherds were still in the field” and people came traveling from all over Galilee to get enrolled by the Romans.
As husbands probably were not allowed to assist at birth at that time and to give the newborn a warmer and more silent place, Mary was shortly before the birth, probably taken by a midwife, to the lower and warmer part of a house belonging to parents of Joseph, where some animals were kept.
As Jesus was released from the umbilical cord, cleaned, wrapped in bandages and given the breast,  a manger with soft ad warm hay, may have been Jesus’ first bed, where Joseph and his closest relatives and friends may have seen him for the first time.
read more about this in https://www.whychristmas.com/story/birth.shtml