Hello. I wonder how are children educated in different  countries

In Italy it is still a problem, especially in the south. Spanking and offenses are allowed if they do not harm the children physically and psychologically.

I paraphrased an Italian song that you may know.

Listen to the children at the end after minute 6. Especially the last child showed wisdom and intelligence.
https://youtu.be/G-8DHq80nLI

UN about corporal punishment of children

“Governments should ensure that children are properly cared for and protect them from violence, abuse and neglect by their parents, or anyone else who looks after them.”

Laws around the world

According to the Act (2018: 1197) on the United Nations Convention on the Rights of the Child Article 19, children have the right to be protected against psychological or physical violence

According to the Parents Code, Chapter 6, Section 3, children … must not be subjected to corporal punishment or other abusive treatment.

According to the provision, Chapter 6, Section 1, children may not be subjected to corporal punishment or other abusive treatment.

“Anyone who abuses the means of correction or discipline (1) to the detriment of a person under his authority, or entrusted to him for reasons of education, instruction, care, supervision or custody, or for the exercise of a profession or a art, is punished, if the fact derives the danger of an illness in the body or in the mind (2), with imprisonment of up to six months.”

Read more in https://www.brocardi.it/codice-penale/libro-secondo/titolo-xi/capo-iv/art571.html#:~:text=Cass.,-pen.&text=571%20c.p.%20l’uso%20della,una%20lesione%20o%20la%20morte.
Abuse that may cause “illness in the body or in the mind”  is prohibited. It is not strange that parents I talked with said: “giving a spanking is ok, it is good and good”
Italian children know that they can call someone if they are punished pysically. https://azzurro.it/
In their document https://azzurro.it/wp-content/uploads/2020/08/Violenza_online_offline.pdf they report this statistic: 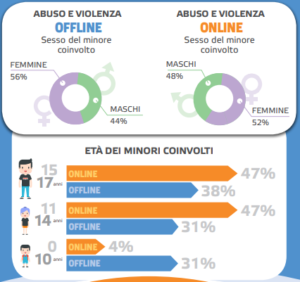 The Menino Bernardo Law refers to Brazilian law that aims to prohibit the use of physical punishment or cruel or degrading treatment in the education of children and adolescents. The name was adopted by the deputies when the bill 7672/2010, from the Presidency of the Brazilian Republic, proposed to the Brazilian National Congress, was still being processed. The Brazilian press, on the other hand, dubbed the Law of the Spanking Law.

Reported by Congresswoman Teresa Surita (PMDB-RR), the project foresees that parents who mistreat their children are referred to the official family protection program and to courses in counseling, psychological or psychiatric treatment, in addition to receiving warnings. The child who suffers the aggression, in turn, should be referred to specialized treatment. The proposal also provides for a fine of three to 20 minimum wages for doctors, teachers and public officials who are aware of aggression against children and adolescents and do not report to the authorities. [1] The law has generated controversy and many discussions since it was proposed in 2003. This law was passed by the Chamber of Deputies on May 21, 2014 [2] and passed in the Senate on June 4, 2014. The arguments in favor of The law is that it aims at recognizing and guaranteeing the human rights of children and adolescents and overcoming an archaic custom. [3] [4] [5] Other arguments are that physical violence does not educate minors to a culture that claims to be peaceful. According to its defenders, the spanking law is one of the actions that aims to educate people to solve their problems through mutual dialogue and understanding, and not through physical aggressions and / or humiliation. She is supported and suggested by the presenter Xuxa Meneghel, who says that this is the ideal model for education.

The reactions against the bill were due to the cultural acceptance of physical punishment for children and adolescents by parents and guardians. The main argument against the law is the rejection, by families, of State intervention in private matters, such as the education of children at home. Other criticisms are the punishment, provided for in the law, from 1 to 4 years in prison, in addition to the loss of family power, not only for adults who beat their children heavily, but also who pinch, “pedagogical spankings” [6] or even psychological aggressions, such as punishment without physical punishment in minors.
read more in agenciabrasil.ebc.com.br/direitos-humanos/noticia/2014-06/entra-em-vigor-lei-da-palmada