This post is the development of thoughts that I had in 2008. read these in http://www.kinberg.net/wordpress/stellan/2020/08/09/silent-women/

“All Scripture is God-breathed ….”

JW following Paul have among their books, one with the title
“All Scripture Is Inspired of God and Beneficial” https://wol.jw.org/en/wol/d/r1/lp-e/1101990061

A friend atheist of mine once said “The religion is an invention of the Devil”.

God is per definition all-knowing

God if there is one, should, therefore, know the consequences of some stories spread by messengers/prophets to humans.

Stories like Moses Genesis, that caused so much pain and death can not be the words of a all-knowing God.

I shared my personal perception of God in:

It is of course not static.

I have written about homophobia and witchhunt. I have often found a connection between evils around us and religions and messengers like Paul and others. I  saw that all evilness led me to the apostle Paus and Bible Genesis.

I have long thought about the consequences of the Genesis story. About all the women who have suffered and died probably because of this “God-breathed” story.

Reading the book “Chiara di Assisi” (Clare of Assisi) by Dacia Maraini that discusses the situation of women in Italy why teenage women who preferred to imprison themselves for up to 40 years in convent living in poverty and silence instead of suffering the domination of a husband in marriage.

The hypothesis came up that Moses, who is said to have written Genesis, may have been inspired by an evil inner voice when he wrote Genesis.

I that is true, could maybe the Devil have inspired Moses?

I invite you to, first of all, read my page about bias and deities as it explains some concepts I use in my conclusions.

Jesus and Paul about Genesis 1-2

Paul refers often to Genesis. But how is it with Jesus?

Only in Matthew 19:4-6 you can listen to Jesus referring to Genesis 1:
“Some Pharisees came to him to test him. They asked, “Is it lawful for a man to divorce his wife for any and every reason?”
“Haven’t you read,” he replied, “that at the beginning the Creator ‘made them male and female,’ and said, ‘For this reason, a man will leave his father and mother and be united to his wife, and the two will become one flesh’?” So they are no longer two, but one flesh. Therefore what God has joined together, let no one separate.”

But nothing is said about a woman wanting to divorce a man. And  when you marry a woman in Church, it is not God that has joined together but love. And love can die.

If you instead look for Paul referring to Genesis 1 you find a lot of sites.

He says on page 19 among others “We know that he was probably only using the Hebrew of Gen 2:18-25 as a point of reference…Paul begins with the theological statement and then builds his argument from there. This method of interpretation is known as a form of midrash. ” Haggadah midrash according to page 24

Page 22 continues with  “Paul is inquiring of God to find a solution to the problem of gender distinctions in worship, and he bases his solution on his understanding of Gen 2:21-23.”

Read more about Paul and Genesis in:

Jesus never talked about women as inferior to the man as Eve was created from the rib of Adam and she listened to the devil. But Paul does.

Nor does Jesus talks about homosexuality.

Moses was most probably a good man. He did maybe listened to his inner voice conditioned by his biases. Also, several scientists like Cantor and Einstein seem to have done so. I have done so too. But who did talk to Moses? Could he distinguish between the voices? I have my doubts about that.

I am more and more convinced that that was not God or a good intelligent voice that talked to Moses. The devil may have inspired Moses with the Genesis story to Moses who believed in it because he didn’t know better and wrote it (many believes he did this) down as his first book.

The story about the tree of the knowledge of good and evil is a strange one Why would God not allow humans to know about good and evil especially when created in the image of God? That tree story contradicts the fact that all humans have some kind of inner innate moral supported by bad and good conscience.
And God as all-knowing and loving would have known about the weakness of humans, a well-developed brain, having an obvious wish to know and distinguish between evil and good. Who would not?
God would therefore not have tempted these first human beings with some impossible obstacle, like a “tree of the knowledge of good and evil” ( Genesis 2:9 2:17)

The devil told that Eden was between Tigris and the Euphrates 2-14 something that was told differently to the prophet Mohammad. This Tigris story is one of the pillars of conflict between Science (among others anthropology) and Hebrews and Christians. God does not induce to evilness so God had no reason and intention to tempt nor confuse human beings and have many of them using reason, burned for heresy like e.g. Giordano Bruno.

The creation of a woman is another one evil leading story (Genesis 2:18) The woman to become  “a helper suitable for him”.

God that is a loving spirit, would never share a story that creates damage.

An agnostic/atheist view of Genesis

I don’t know if this is a view from an agnostic or atheist. I think however that this answer to the question “What are some arguments supporting the claim that the biblical God is cruel?” shared by Nick L. in Quora is a excellent, great and clear analysis of Genesis:

if it was an evil voice to inspire Moses, the evil voice was able to tell the simplified story of the creation of the Universe (1:1-2:2) and the creation of human beings (2:7- ). These stories were easy enough to be understood by Moses and were in agreement with his confirmation bias and teleological biases and stereotypes among others 6000 years ago. It was fully acceptable for men who did not want to abandon their power over women.

With this in mind I went back, reading Genesis again to create this list of verses, allusions, and evil consequences:

Ǵod being all-knowing would know the consequences of this Bible Genesis story.

If God gave this story to  Moses then God reveals to be either ignorant for the consequences or does God reveal itself to be nasty beast having fun setting up rules that can not be followed by intelligent people wanting to use their brain and know more.

And with the punishment, even punishing the unborn, like Hitler made in the concentration camps.

If Genesis is God breathed then God is incredibly cruel.

It is not strange that many find God to be cruel and a psychopath. because that is the picture Genesis gives.

If Genesis was evil-breathed or conditioned by biases at Moses then we can have back our loving and forgiving God.

Only a devil or an evil God if it exists, would have wanted all this evilness. Not an all-knowing and forgiving God.

So most probably, Genesis was written by a man with bad mood, stereotypes,  unconsciousness bias, confirmation bias, and teleological bias.

Genesis must be rewritten

But this implies that we need a new Genesis. A Genesis that tells us that maybe…

These evolutions (nucleosynthesis, stellar, organic, biologic, cultural) finally ended up us having a brain on Earth, to be used taking care of ourselves and our planet. 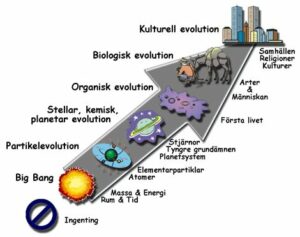 When I wrote my illuministic Genesis it was obvious for me to take inspiration from the  Quranic version of the Creation and to what Science tells us.