Todaya we read John 10,1-10 the parable about the  shepherd of the sheep. The parable tells how a good shepherd should behave. is is a nice parable that allows important interpretations but I wonder about the explanation that Jesus gave according to John. May John have put his own interpretation in Jesus explication?

10:01 “Most certainly, I tell you, one who doesn’t enter by the door into the sheep fold, but climbs up some other way, the same is a thief and a robber. But one who enters in by the door is the shepherd of the sheep. The gatekeeper opens the gate for him, and the sheep listen to his voice. He calls his own sheep by name, and leads them out. Whenever he brings out his own sheep, he goes before them, and the sheep follow him, for they know his voice. They will by no means follow a stranger, but will flee from him; for they don’t know the voice of strangers.” Jesus spoke this parable to them, but they didn’t understand what he was telling them.

10:7 Jesus therefore said to them again, “Most certainly, I tell you, I am the sheep’s door. All who came before me are thieves and robbers, but the sheep didn’t listen to them. I am the door. If anyone enters in by me, he will be saved, and will go in and go out, and will find pasture. The thief only comes to steal, kill, and destroy. I came that they may have life, and may have it abundantly.

Before dealing with this part it is important to remember that

God is the good shepherd

at Jesus time, God was known as the good shepherd.

“I tell you, I am the sheep’s door. All who came before me are thieves and robbers, but the sheep didn’t listen to them. I am the door. If anyone enters in by me, he will be saved,“

Jesus was not a bragger

Did really Jesus say “ I am the sheep’s door. and repeated again “I am the door.” ?

Jesus is and has been a door for me as for many others, like the authors of Johns Gospel.

But the language is not Jesus language. He did not like to do miracles and he did not want his disciples to tell the world about is power. He was not a bragger shouting out “I am” this and that. he followed his own teaching “The last will be first… the first will be last”

I am rather convinced that the John Gospel authors, added their own interpretation to spice up the text for their own purposes and to add the dogma that Jesus is God.

Jesus was a good Jew.

He referred many times to previous prophets, like Moses, Jeremiah etc. Now he says “All who came before me are thieves and robbers,” ? Some interpret this a referring to the priests of his time.

This is a unintelligent not Jesus alike sentence as it undermines religious tollerance and peace. A sign that these are probably not the words of Jesus.
Again, a most probably, adding from the Gospel authors, with the goal to to give the early Church the right to “cast out”, kill Hebrews or any other prophet followers and  give themselves the title “shepherd”

Johns author may have found Mark’s description in  06:35 very useful:

“Jesus came out, saw a great multitude, and he had compassion on them, because they were like sheep without a Shepherd,”

Jesus never regarded himself equal to God. God was his father. John MacArthur talks about the OT (Old Testament) importance in the Shepherd image issue. Even if I do not agree about his conclusions, I think it is worth listening to:

Let us instead focus on the parable to understand its hidden messages.

The shepherd could be a  metaphore for any leader, a king, a president, a politician, a chairman, a doctor, a headmaster,  a teacher, a mother or the owner of  a garden, a dog or a cat.  All of us has something to take care of. All humans must be good shepherds.

many “sheeps” followed Hitler and Stalin but for other reasons. If these sheeps would have been able to, they would have fled, like Einstein and many others did.

The parable tells among others that:

“he goes before them,  and they will by no means follow a stranger, but will flee from him;”

So does your “sheeps” follow behind you by their own will and don’t they flee from you? if yes, then you are probably a good shepherd. I say “probably” as you are not only the owner of your own garden and house. you are also a kind of “owner” of the Creation.

A good shepherd loves his sheeps, He does not damage, use violence nor he shouts or treathens. he makes them stay safe and cured.

As Pope Francis reminded “We are not owners of the Creation” in the “bad owner” sense, we can not do whatever we want with it.

So we could say “We must take care of the Creation that was given to us. We must not behave like a bad owner or human.

A good friend of mine, reminded me about another shepherd parable, the one where the shepherd left the sheep flock to save a sheep left behind. (Matthew 18:12–14) and Luke (Luke 15:3–7) A good shepherd does non abandon anyone. This is also a parable of “Love your next”.

This was the first time that I could not listen to a parable explanation in a Gospel. I think that it is important especially this time, to focus on the parable. It may be interpreted in many ways, the power of a good parable.

Jesus guided us to God. To be a good shepherd is obviously a important way to love God. if you do not love the Creation (animals and enemies included) you do not love God who created it.

It is not easy to be a good shepherd. You have to be patient and teach the right way. This man has not succeeded yet. 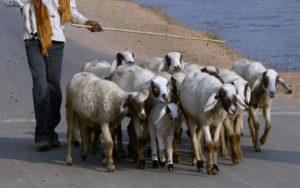 This man is obviously a good shepherd. Like Jesus talked about, he is going first and the sheeps follow him. 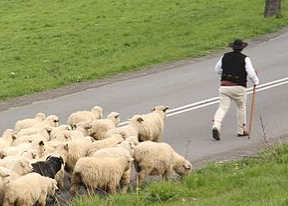