Saturday evening April 26 we read Luke 24,13-35 that Jesus appeared with two of the disciples in a funny way.  He was resurrected and he made  two disciples  believe he was a stranger to have them tell how they  experienced and saw his death. That gave him the opportunity to tell them about the many signs given in the scriptures by the old prophets.

The texts below are copied from a pdf in www.christianwritingtoday.com

Luke 24,13-35 tells about a funny way for Jesus to appear after his death.

24:13 Behold, two of them were going that very day to a village named Emmaus, which was sixty stadiai from Jerusalem.
24:14 They talked with each other about all of these things which had happened.
24:15 It happened, while they talked and questioned together, that Jesus himself came near, and went with them. But their eyes were kept from recognizing him.
24:17 He said to them, “What are you talking about as you walk, and are sad?”
24:18 One of them, named Cleopas, an swered him, “Are you the only stranger in Jerusalem who doesn’t know the things which have happened there in these days?”
24:19 He said to them, “What things?” They said to him, “The things concerning Jesus, the Nazarene, who was a prophet. mighty in deed and word before God and all the people; and how the chief priests and our rulers delivered him up to be condemned to death, and crucified him.
24:21 But we were hoping that it was he who would redeem Israel. Yes, and besides all this, it is now the third day since these things happened. Also, certain women of our company amazed us, having arrived early at the tomb; and when they didn’t find his body, they came saying that they
had also seen a vision of angels, who said that he was alive. Some of us went to the tomb, and found it just like the women had said, but they didn’t see him.”
24:25 He said to them, “Foolish men, and slow of heart to believe in all that the prophets have spoken! Didn’t the Christ have to suffer these things and to enter into his glory?” ‘

24:27Beginning from Moses and from all the prophets, he explained to them in all the Scriptures the 8things concerning himself. They drew near to the village, where they were going, and he acted like he would go further.

24:29 They urged him, saying, “Stay with us, for it is almost evening, and the day is almost over.”
24:30He went in to stay with them. It happened, that when he had sat down at the table with them, he took the bread and gave thanks. Breaking it, he gave to them. Their eyes were opened, and they recognized him, and he vanished out of their sight. They said one
to another, “Weren’t our hearts burning within us, while he spoke to us along the way, and while he opened the Scriptures to us?” They rose up that very hour, returned to Jerusalem, and found the eleven gathered together, and those who were with them, saying, “The Lord is risen indeed, and has appeared to Simon!”

24:35 They related the things that happened along the way, and how he was recognized by them in the breaking of the bread.

I could not find Emmaus in Google maps. Emmaus got a new name obviously today. I finally found in Wiki the name Al-Qubeiba That is near Amaos Church on the hill in this photo

Emmaus is described as being 60 stadia (10.4 to 12 km depending on what definition of stadion is used, from Jerusalem. Emmaus, today Al_Qubeiba is at the red spot north from Jerusalem. 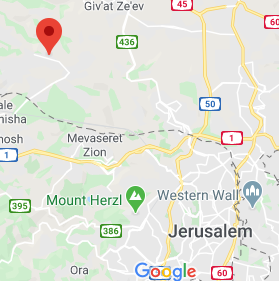 They for sure found shorter ways that cars cant take today, taking less time to cover without going to far north. 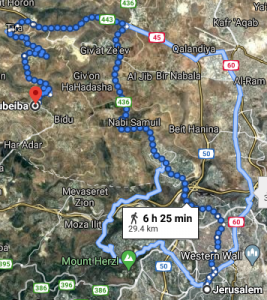 Going north was maybe a first step in seeking security in Samaria  (Sychar probably called todaay “Tell balata” (see Wiki photo below) 16 hours walk from Jerusalem, near Nablos and the mount Gerizim today) where Jesus and his disciples with the Samaritan woman found a faithful people. 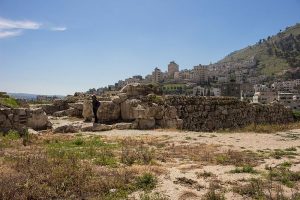 According to Wiki research “The built structure shows evidence of considerable damage dated to the 190s BC, and attributed to Antiochus III‘s conquest of Israel. Habitation continued until the final destruction of the city at this site in the late 2nd century BC. ”

So the town of Sychar as told about in the the Samaritan woman may not be correct. However it is clear that north of Jerusalem we find Samariaa more secure site for the disciples of Jesus.

This is a wonderful piece of text where Jesus is making a clever joke having the two disciples believe he is a foreigner to have them tell what happened. Indeed a clever joke. it is simply to nice and clever  to have been invented by Luke.

There is no reason for Jesus to ask about what happened in Jerusalem. But he probably want to know what they understood and believed in.

Jesus shows his love, empathy and sympathy with the disciples. No signs of rage for their fleeing away from him when he was arrested.

Like Jesus showed up on the road to Emmaus so he can appear to us all like the more scaring metaphore “robber in the night”. Most probably he appears inside you. he didn’t like to make miracles and big eye catching shows. If we keep silence and listen carefully you may be able to talk with Jesus.

Mark 16:12–13 has a similar but very undetailed version

16:12disbelieved. After these things he was
revealed in another form to two of them, as
they walked, on their way into the country.
16:13 They went away and told it to the rest.
They didn’t believe them, either.

Luke probably wanted to add more details to show a different image of the personality of Jesus,.

It was good to rewrite my previous year post and meditate over the text of Luke.

I wonder if Luke was right with his picture, Jesus had a good sense of humor despite we never read about a laughing Jesus.

Maybe he laughed while being a child.