I my learning about math history, I discovered a  very special woman. I describe her with the help of texts taken from en.wikipedia.org. I reedited the text removing links that are required in Wiki, to make the text  easier to read.

As you can see bleow there is a French book about her. I have not read it yet. 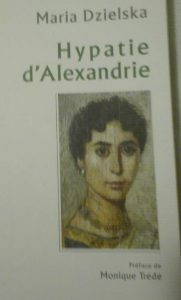 You will find all sources and references in wiki if you want to know more.

Hypatia, was born c. 350–370 and  died 415). She was a Hellenistic Neoplatonist philosopher, astronomer,  mathematician and teacher, who lived in Alexandria, Egypt. Her father was her teacher and became later, her cooperator.

At her time, Egypt was part of the Eastern Roman Empire. She was a prominent thinker of the Neoplatonic school in Alexandria where she taught philosophy and astronomy.

She is the first female mathematician and philosopher whose life is reasonably well recorded.

Nothing is known about Hypatia’s mother, who is never mentioned in any of the extant sources.

Hypatia was renowned in her own lifetime as a great teacher and a wise counselor.

Although she herself was a pagan, she was tolerant towards Christians and taught many Christian students, including Synesius, the future bishop of Ptolemais. Ancient sources record that Hypatia was widely beloved by pagans and Christians alike and that she established great influence with the political elite in Alexandria.

Damascius states that Hypatia remained a lifelong virgin and that, when one of the men who came to her lectures tried to court her, she tried to sooth his lust by playing the lyre. When he refused to abandon his pursuit, she rejected him outright displaying her bloody menstrual rags and declaring

“This is what you really love, my young man,
but you do not love beauty for its own sake.”

Hypatia was a Neoplatonist, but, like her father, she rejected the teachings of biographer Lamblichus and instead embraced the original Neoplatonism formulated by Plotinus. (In Plotinus  philosophy, described in his Enneads, there are three principles: the One, the Intellect, and the Soul.)
The Alexandrian school was renowned at the time for its philosophy, and Alexandria was regarded as second only to Athens as the philosophical capital of the Greco-Roman world. Hypatia taught students from all over the Mediterranean. According to Damascius, she lectured on the writings of Plato and Aristotle. He also states that she walked through Alexandria in a tribon, a kind of cloak associated with philosophers, giving impromptu public lectures.

The Christian historian Socrates of Constantinople, a contemporary of Hypatia, describes her in his Ecclesiastical History:[21]

“There was a woman at Alexandria named Hypatia, daughter of the philosopher Theon, who made such attainments in literature and science, as to far surpass all the philosophers of her own time. Having succeeded to the school of Plato and Plotinus, she explained the principles of philosophy to her auditors, many of whom came from a distance to receive her instructions. On account of the self-possession and ease of manner which she had acquired in consequence of the cultivation of her mind, she not infrequently appeared in public in the presence of the magistrates. Neither did she feel abashed in going to an assembly of men. For all men on account of her extraordinary dignity and virtue admired her the more.”

She is known to have written a commentary on Diophantus‘s thirteen-volume Arithmetica, which may survive in part, having been interpolated into Diophantus’s original text, and another commentary on Apollonius of Perga’s treatise on conic sections, which has not survived. Many modern scholars also believe that Hypatia may have edited the surviving text of Ptolemy’s Almagest, based on the title of her father Theon’s commentary on Book III of the Almagest.

Hypatia is known to have constructed astrolabes and hydrometers, but did not invent either of these, which were both in use long before she was born.

Hypatia has been described as a universal genius, but she was probably more of a teacher and commentator than an innovator. No evidence has been found that Hypatia ever published any independent works on philosophy and she does not appear to have made any groundbreaking mathematical discoveries.

During Hypatia’s time period, scholars preserved classical mathematical works and commented on them to develop their arguments, rather than publishing original works. It has also been suggested that the closure of the Mouseion and the destruction of the Serapeum may have led Hypatia and her father to focus their efforts on preserving seminal mathematical books and making them accessible to their students.

The Suda mistakenly states that all of Hypatia’s writings have been lost,but modern scholarship has identified several works by her as extant.

This kind of authorial uncertainty is typical of female philosophers from antiquity.

Hypatia wrote in Greek, which was the language spoken by most educated people in the Eastern Mediterranean at the time. In classical antiquity, astronomy was seen as being essentially mathematical in character Furthermore, no distinction was made between mathematics and numerology or astronomy and astrology.

Towards the end, murder and aftermath

Towards the end of her life, Hypatia advised Orestes, the Roman prefect of Alexandria, who was in the midst of a political feud with Cyril, the bishop of Alexandria. Rumors spread accusing her of preventing Orestes from reconciling with Cyril. Despite Hypatia’s popularity, Cyril and his allies attempted to discredit her and undermine her reputation.

Socrates Scholasticus mentions rumors accusing Hypatia of preventing Orestes from reconciling with Cyril. Traces of other rumors that spread among the Christian populace of Alexandria may be found in the writings of the seventh-century Egyptian Coptic bishop John of Nikiû, who alleges in his Chronicle that Hypatia had engaged in satanic practices and had intentionally hampered the church’s influence over Orestes. He wrote:

“And in those days there appeared in Alexandria a female philosopher, a pagan named Hypatia, and she was devoted at all times to magic, astrolabes and instruments of music, and she beguiled many people through her Satanic wiles. And the governor of the city honoured her exceedingly; for she had beguiled him through her magic. And he ceased attending church as had been his custom… And he not only did this, but he drew many believers to her, and he himself received the unbelievers at his house.”

According to Socrates Scholasticus, during the Christian season of Lent in March 415, a mob of Christians under the leadership of a lector named Peter, raided Hypatia’s carriage as she was travelling home.

They dragged her into a building known as the Kaisarion, a former pagan temple and center of the Roman imperial cult in Alexandria that had been converted into a Christian church.

There, the mob stripped Hypatia naked and murdered her using ostraka (which can either be translated as “roof tiles” or “oyster shells).Damascius adds that they also cut out her eyeballs.

They tore her body into pieces and dragged her mangled limbs through the town to a place called Cinarion, where they set them on fire.

According to Watts, this was in line with the traditional manner in which Alexandrians carried the bodies of the “vilest criminals” outside the city limits to cremate them as a way of symbolically purifying the city.

Although Socrates Scholasticus never explicitly identifies Hypatia’s murderers, they are commonly assumed to have been members of the parabalani. Christopher Haas disputes this identification, arguing that the murderers were more likely “a crowd of Alexandrian laymen”.

Socrates Scholasticus presents Hypatia’s murder as entirely politically motivated and makes no mention of any role that Hypatia’s paganism might have played in her death. Instead, he reasons that “she fell a victim to the political jealousy which at that time prevailed. For as she had frequent interviews with Orestes, it was calumniously report ed among the Christian populace that it was she who prevented Orestes from being reconciled to the bishop.”

Socrates Scholasticus unequivocally condemns the actions of the mob, declaring, “Surely nothing can be farther from the spirit of Christianity than the allowance of massacres, fights, and transactions of that sort.”

Hypatia’s murder shocked the empire and transformed her into a “martyr for philosophy”, leading future Neoplatonists such as Damascius to become increasingly fervent in their opposition to Christianity.

During the Middle Ages, Hypatia was co-opted as a symbol of Christian virtue and scholars believe she was part of the basis for the legend of Saint Catherine of Alexandria.

During the Age of Enlightenment, she became a symbol of opposition to Catholicism.

In the nineteenth century, European literature, especially Charles Kingsley’s 1853 novel Hypatia, romanticized her as “the last of the Hellenes”.

In the twentieth century, Hypatia became seen as an icon for women’s rights and a precursor to the feminist movement. Since the late twentieth century, some portrayals have associated Hypatia’s death with the destruction of the Library of Alexandria, despite the historical fact that the library no longer existed during Hypatia’s lifetime.

read more in en.wikipedia.org where you find all the sources used to know more about Hypathia.

Some modern scholars consider that the legend of Saint Ctherine_of_Alexandria martyred 18 year old 305 under Emperor Maxentius, was probably based on the life and murder of the Hypatia.

There is a  film in Italian shared in Italian television 6-7 years ago. There is  a Youtube with the film

Yo may also enjoy this youtube that also describes neoplatonism.

A extraordinary woman. Maybe she is the first woman to have been sacrificed by Christians because of political reasons. Many women have died after her but noone I have found had this remarkable history. Read more about these women in myarticle about witchhunt-in-europe. Hypatia’s history reminds me of that of Jeanne d’Arc who also died for political reasons.