Is it maybe again a way to help the badly hit mafia? As Saviano wrote a few days ago, the mafia always find ways to earn money and eliminate enemies, now the Sicilians themselves,  where many have risked their lives and some died. 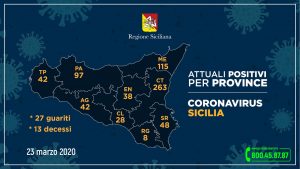 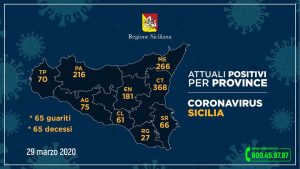 As you can see from this map from March 23, the East of Sicily with Messina and Catania is already the most hit by Corona.

I translated a article from Live 24.it for you to read:

The decrees of the Government and the Region ordinances do not hinder the continuous exodus to Sicily of people without thinking of the consequences seeking to return the island.

Last night, after the president of the Calabria Region has ordered the closure of the entrances in the provinces of Calabria, Villa San Giovanni the Calabrian ferry harbour were besieged with people coming from north Iraly,  only a few ferries depart daily, destined mostly to commuters working in the health sector that need to reach hospitals.
The Sivcilian Region president  Musumeci denounced yet another flaw in the system of control and accountability to the people asked: “You can not – he said in a post on Facebook – and I do not accept that to happen.
I asked the prefect to intervene immediately. There is a decree of the Minister of Infrastructure and the Minister of Health that prevents it.
he continued” I request that order is respected and that further checks are carried out on departure. The national government intervenes because we Sicilians are not cannon fodder!
In the light of the national measure, only commuters who perform public service such as health, armed forces and police can travel. That’s enough.
We are making huge sacrifices and we must give certainty to all citizens that this is followed with commitment. ” as health, armed forces and police.
That’s enough. We are making huge sacrifices and we must give certainty to all citizens that this phase is followed with commitment. “
Last night the same Musumeci had been at Messina for a Coronavirus on emergency summit, which was attended by the Prefect Maria Carmela Librizzi, the mayor Cateno De Luca, the heads of law enforcement and health Peloritane area agencies .In the seat of the prefecture, the governor explained all the measures already taken in the hospitals of the capital and the province of Messina to meet emergency and ongoing initiatives to counter a possible epidemic peak.read more at Live 24.it .Italian state railways continue to sell train tickets to Sicily. This must be stopped. Sicily can not afford more Corona cases.Please share. The world must know what the Italian government is doing with Sicily.Thank you for your attention