As you know I try to not get blinded by the miracles, documented in the Gospels. Jesus kerygma is miracle enough and shows that Jesus was a prophet conceived by the Holy Spirit in the womb of Mary. Look e..g at his commandment “Love your enemy” and “turn the other cheek” that completely revolutionized the thinking of his time that was led by the revenge mantra and animal instinct.

But this miracle story is special. As told by John it sounds like a metaphore about human blindness.

I will in this post try to analize the miracle and message Jesus gave according to John 9,1-41

Most of the text has focus on the miracle of open the vision of a man born blind. I share here the message of Jesus in this passage:

1 As he went along, he saw a man who had been blind from birth.

2 His disciples asked him, ‘Rabbi, who sinned, this man or his parents, that he should have been born blind?’

3 ‘Neither he nor his parents sinned,’ Jesus answered, ‘he was born blind so that the works of God might be revealed in him.

4 ‘As long as day lasts we must carry out the work of the one who sent me; the night will soon be here when no one can work.

5 As long as I am in the world I am the light of the world.’

39 Jesus said: It is for judgement that I have come into this world, so that those without sight may see and those with sight may become blind.

40 Hearing this, some Pharisees who were present said to him, ‘So we are blind, are we?’

41 Jesus replied: If you were blind, you would not be guilty, but since you say, ‘We can see,’ your guilt remains.

The story is about a man born blind

I studied and wrote previously about consciousness and neuroscience. let us look at blindness. healthline says:

“Blindness is the inability to see anything, including light. If you’re partially blind, you have limited vision. For example, you may have blurry vision or the inability to distinguish the shapes of objects. Complete blindness means you can’t see at all. …”

Department of Physics
University of Illinois at Urbana-Champaign writes:

“blind people do dream. What they see in their dreams depends on how much they could ever see. If someone has been totally blind since birth, they only have auditory dreams.”

About  He was born blind so that the works of God might be revealed in (ed. greek: ἐν) him

or “Revealed with him”?

As this phrase is said after Jesus made a blind man see it leads easily to read “revealed with him” . This leads to the simplicistic and common interpretation  that there are blind humans so God and Jesus with blind people can show the humans “the works of God.”as the miracles of God and Jesus.

It sounds for me absurd that millions of people are to be born blind by God so God can show its power to heal.

the works of God

works  is written in Greek as ἔργα (erga)

erga is seen also in Matthew 23:3 translated as deed
“but do not be guided by what (ed. the work) they do, since they do not practise what they preach.”

So the works of God may also refer to the Creation of God as revealed in the Genesis. But as Genesis was already revealed to Moses, this interpretation should be excluded.

So let us look closer at

So, I wonder what may a blind man get revealed “in him” that seing man isn’t?

Does it says that blind are destined to become prophets to share the messages of God?

Prophets are known to get words revealed

Despite there are and have been many humans born blind, I found only a few who were regarded as blind prophets:

I find that I have to abandon this path. I remenbered then that

We are the temple of God

We have read in the Corinthians 3:16 these interesting words of Paul:

Do you not know that you are a temple of God
and that the Spirit of God dwells in you?

Some prophets have got messages revealed in dreams. More or less like the woodworker Joseph about the danger for his son.

Being distracted by sight

A blind man is not distracted by vision signals sent from the eyes. Being Born blind they have  no inner vision nor visual dreams but having auditory dreams they may have a inner voice.

In my experience and what I l read about, we all have a inner voice.

Look at this video about inner voice.

Inner voice may be pathological as it is for some killers.

However with meditation we can train ourselves to not get so distracted by impulses, in this case visual impulses.

The woman in this video says that according to fMRi studies, the auditory cortex is activated if you have a dialog with someone in your mind.

Maybe we can talk with God or anyone you know that has deceased?

The blind man a metaphore of darkness in our mind?

This second interpretation I have met in priest sermons, is more intelligent. It connects to Jesus saying “I am the light of the world.’” but I don’t think that Jesus really said that. He was not a bragger as I wrote about in another post.

As I said in my introduction Jesus has “completely revolutionized the thinking of his time that was led by the revenge mantra and animal instinct.”

Jesus has with his words opened the mind of many, mine too.

But Jesus was not the first prophet to “open our minds”.

Jesus was  preceded by the Zoroastrians Gathas in the Iranian region were the main message and the ethical goals of Zoroastrianism was “good thoughts, good words, good deeds” (See the “Threefold Path of Asha: Humata, Huxta, Huvarshta“)
Buddhism came before the Zoroastriam ethical goals in India with the Eightfold_Path of Enlightment.

Jesus as it is known in matthew/15-24.htm, was sent only “to the lost sheep of Israel.” a people who seldom had relations with the people in Iran and India and followed their own path of “eye for an eye”.

So like Christian say that Jesus is the light, is not correct for all humans around the world. I would rather say

Jesus was the light for “the lost sheep of Israel.”

I have been helped by the words of Jesus several times, when I ended up in “mind blindness”.

But Buddhist meditation like prayer has also helped me to see light during dark moments of my life.

It is interesting to read hindu Mahatma Gandhi writing that: 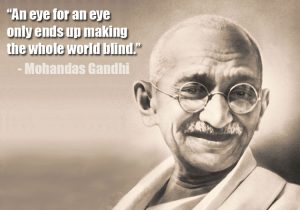 The value of silence

Elisabeth of trinity has teached us about the value of Silence for this inner dialog.

And as Rumi said

As said in my introduction I normally omit all miracle stories to focus on Jesus words, kerygma.

But this miracle is special one.

True or not, as told by the great author of John, this miracle story  is a metaphor about the human kind.

A human kind that has been “blind” since its birth (in Africa) but can see again with the light, a metaphor of the words of prophets, starting with Adam that maybe was incarnated in a human body after his spirit had to leave Eden in Heaven to come down to earth. See my post about this yet indeterminable hypothesis )

You understand or are reminded, I am interreligious. I believe that God did not discriminate. God talked to many, to Siddhartha in India who teached us how to live well with our body and mind, to Zoroaster in Iran who shared his Gathas, to Christians with the voice of Jesus shared in  the Gospels and to Muhammad who shared what he heard in the cave over Mecca in the Quran.

Like the pope Francis, said today, we should also become light by sharing the words and of course, being examples of good humans.

This part of the Gospel of John has led me into a nice voyage in my mind, ending up in thinking about my own iinner dialog

We are all “blind” at birth with a great curiosity. In our inner blindness we want to learn and understand. In our search, we may later find our inner temple and a voice talking to us and guiding us. Our brain is prepared for this dialog. But question is if we are able to listen.

Find a quiet and peaceful place (may it be in the wood, in a church or on a balcony) where you feel good. Sit down in a comfortable chair and start listen to your inner voice. Ask God and God listen to the answer. 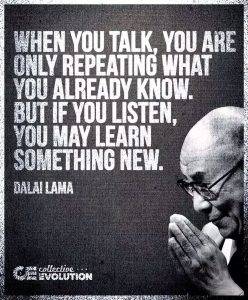