Austria was the first country in Europe to stop people at the border, requesting health certificate from doctor. Austria declared Italy as a red zone. Italy has not declared itself as a  red zone. And Italy has become a example for the world, to write about and follow. 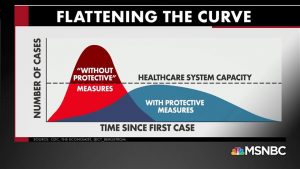 A reporter in Euronews said three days ago, that Italians are not known to follow rules.

But why are they following rules now and how is this possible? How is it possible that a tactile people like the Italians, now avoid cheek kissing and hand shakes keeping security distances?

The Euronews reporters answer was that the Italians now are scared for their health. I am not satisfied with that answer.

To find a answer is not easy. I will look at a few factors that may explain this Italian revolution.

Newspapers warn the Italians for punishment if they do not respect the new corona prevention laws. The treath of punishment is for sure important for some Italians. But i have not heard anyone saying “Go peacefully wherever you want as there is no police controls around!” something  i heard about using helmets on my scooter. I were warned once “Use the security belt in your car as they are checking this!”

If there is noone checking that the laws are followed, then laws are useless in Italy

January 16 2003 The Italians had a new law art 51 nr 3 . that said ” it is prohibited to smoke in closed public areas ”è vietato fumare nei locali chiusi, ad eccezione di quelli privati non aperti ad utenti o al pubblico;”). After a year you could travel by train and busses, go to restaurants and bars and you had no smoking people around at all, not even in the toilets. But really noone checked that this no smoke law was respected. At the airport in Catania, a proud young policemen smoked with the “no smoke” signal behind him. A few years later i were stoped by a airport officer as I took by mistake a vape from my a electronic cigar waiting for my luggage. When I said I were vaping, then he left with a “Ok!”

Italians themselves told each other to not smoke.

Despite noone checked really that the no smoke law was respected, the Italians followed the new rule. So why does some rules need to be followed by punishment and others not?

What motivated Italians to stop smoking and to respect corona preventions instructions so fast may depend on all the information that they got about smoke related cancer maybe also theirown families and for the Corona issue, intensive information in TV, internet and other media.

With all the information Italians got, they understand the risc of being infected by Corona virus. A neighbour of mine is even scared to go to the village, despite it is allowed for basic food or health shopping. We are instructed to stay at home as much as possible.

I have thought about the fact that many Italians rely on the help of Saints. Saint Christoph is the saint that protect travelers in Neaple. In Sicily we have Saint Bartolo. Many go to church and pray for help by God or some saint. By going to mass every Sunday some may think that they are protected by God, so they do not need to protect themselves. Talking with Italians I have heard answers like “Well, the day when we die is decided by God”. This may be a cause of a lower awareness about risks and how to prevent these.
But this does not explain the great epidemy in the atheistic China.

Caring about their own health and the health of the elders is indeed a important factor in Italy Families are used to take care of each other but it may not be the only reason. s I said above, people take big risks, traveling with car, scooter and walking around by night.

We have a Italian revolution going on. The circumstances are scaring, but what we are seeing now, is reassuring me that the Italians can do a lot to change their own lives and country. I think they are enough frustrated and motivated to do so, listening to all Italians who are angry about their own political and economical situation. The only thing is to find out how to change it. It is not enough to accuse at right and left like many do. Most Italians do not want a Mussolini back or a Xi Jinping and they do not need a dictator really.

the Italians must change their habits, pay taxes, be honest to be able request the same from politicians and public administrators who must take well care of the public resources.
“Menefreghismo” (“I dont_care_about_youism”) is a culture that has to be fighted here in Italy. The Corona experience shows that “menefreghismo”  is possible to overcome.

A mio avviso no.