This post has become part of my Learning math serie. (Check the menu above)

I am looking for some reason at Fourier series.

I found a nice video from 3Blue1Brown, visualizing what a Fourier transform is but it never learned me how to make calculation with Fourier series.
I have found a few video in Youtube from Acadian Learning School, I will share here.

I studied math at University about 30 years ago and I seldom teached math at high school level. So  I had to refresh  some old math knowledges, like:

To make integral clculations and plots,I also had to install these programs on my Ubuntu linux laptop:

Fouriers work and story is well described by Mark Newman:

As said in my introduction, Acadiana Learning center offers a Fourier course that I think is the best to start understanding Fourier and how to make calculations with it.

For me it is important to take notes to think about , to better understand. I share with you my notes here on this page.

There is transcript like with Ted youtubes. So, if you have problems with math English and reading transcripts, you may find my  notes and images below useful so you can read the info with your language using the appropriate language button on my site.

All info is taken from this Acadiana Learning center Fourier youtube course.

I hope they dont mind me doing this.

We have this periodic step function 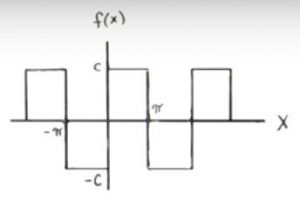 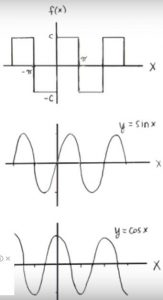 Fourier has came to a solution of how to model the periodical step  function (f(x) above, mathematically as a integral of a sine and cosine  function like this one.

He approximated f(x) as a sum of a constant a0, and a sum of of sine and cosine functions:

Fourier was able to calculate  the coefficient a0, an and bn.  ,.i fyou know these constants I(coeficients) the you can model any function cwith this equation.

The sine function better match and approximation of f(x) as f(x) is a odd function.  For even functions cosine terns are used. This will be shown mathematically as an  will turn out to be 0 with odd funtctions.

JJean Baptiste Fourier found out how to calculate the value of the coefficient a0, an and bn.

For an and bn. he also found out formulas. So he developed for us 0these three equations: 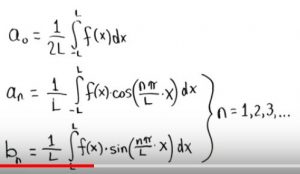 Calculating an and bn. 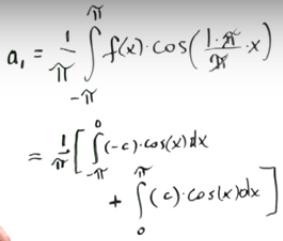 In the image below shows  clearly thath the sum of the two areas from -π to 0, is equal to 0. 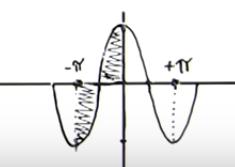 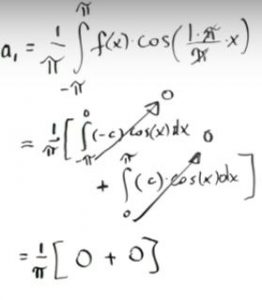 In part 2, the Acadiana Learning center teacher demonstrates that

The teacher demonstrates that

To see what Fouriers equation does you must get a cartesian graph plotter. I downloaded and installed KM plot for linux on my Ubuntu laptop. You find good plotter for sure also with other operative systems.

in the video information in part 1 (source: https://www.youtube.com/watch?v=x04dnqg-iPw )  we read:

“You can graph this with your calculator easily and watch the modeling in action. Make sure you’re in radian mode and let c=1

This equation is equivalent to 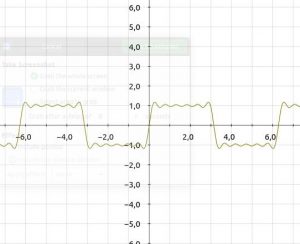 I tried to integrate from n=1 to 29 with

and got this plot:

The more intervalls the more precise the approximated plot. Its a plity,I dont know how to let my plotter plot with n=1 to n=999999999 with odd n. 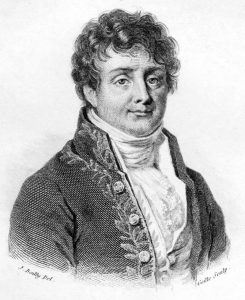 I find it extraordinary that Jean-Baptiste Joseph Fourier born 21 March 1768 during his lifetime (he died – 16 May 1830)  had such a brilliant mathematical talent to create the Fourier equation that today 200 years late  in the digital era, is essential for  sharing music, speech recognition and building engines and bridges.

I like to know more about such talents. It is remarkable Jean-Baptiste Joseph Fourier story reminds me a little bit of Einstein.

Jean-Baptiste Joseph Fourier was a son of a tailor and soon lost his father. He learned math in a Benedectine order. He served in the Revolutionary committe during the French Revolution as well as a scientific adviser for Napoleon in his Egypt expedition 1798

How the h…. did he came up to this equation?

Was it that by studying structures looking like this that his math brain lift off and trigometry knowledges came to use?

Maybe he devloped and found use of Fourier series in this expedition.

The developing of his math must have been done during sparetime a little like Einstein did his math work during sparetime in the Swiss patent office. Read more in https://en.wikipedia.org/wiki/Joseph_Fourier#Biography

Obvioulsy, not all great mathematician matured their genius in schools and Universities.

Studying Fourier, I learned again about integration and trigonometry something I did more than 30 years ago at Chalmers in Sweden. A great brain exercise.