Look at this image taken 1993 by Kevin Carter in Sudan. Do you remember it? I do. 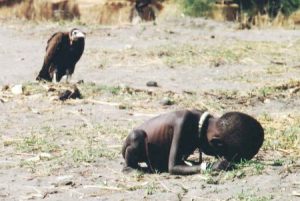 That was 1993. But This is just one “tiny” example of a suffering  child. Unicef says:

About the photos above, can you imagine yourself having superpower to just stay there like a photographer, waiting for the vultur to start choping  the powerful beak into the childs body to slowly eat its flesh?  I Absolutely not. Could you? Carter the photgrapher “scared the vulture away”. What did God? 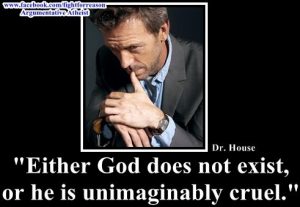 If God is what Christians and Muslim believes, God must indeed be cruel. Muslims says “God decides ove everything that happens in our lives. So If children suffer, God allows that to happen????

I were overwhelmed by these thoughts. I dedicate this post to this difficult issue.

Children around the world suffer not only from malnutrition. Here are two main sources of pain for children:

Do you remember these words of Jesus?

” Jesus called a little child to himself, and set him in their midst, and said, “but whoever causes one of these little ones who believe in me to stumble, it would be better for him that a huge millstone should be hung around his neck, and that he should be sunk in the depths of the sea.” (Matthew 18:02-03 )

Why does a God that loves children, is everywhere, allseing and omnipotent, allow children to suffer? Why does God not intervene helping suffering childrens?

Adults are expected to believe and pray. If you do, God may heal and help you doing a miracle. But small babies and childrens? We can’t expect them to believe, be good Christians, Muslims or whatever.

Einstein said once that he does not believe in a God that intervene in his own creation, He accepted  a God as descibed by Spinoza.

I thought, I am on the way to become a atheist that does not believe in the existence of God? I were overwhelmed.

I wrote about God perception in www.kinberg.net/wordpress/stellan/about-god/ but never added the atheists perception of a cruel God.

I am a retired teacher and have worked with hundreds of young pupils, many of them with traumatizing experiences of war and violence.

Thinking about how children still suffer i were overwhelmed by a crisis in my faith. But working with this post I am partly back on track.

I believe God is expecting *us* to solve the problems in this world. We have been given a brain, intelligence and empathy to do that. If God always eould interveen in every human crisis we would learn nothing.

Apocalypse says  we will be back at the original time of Adam and Eve  at the Resurrection, with a immortal body that never dies and gets sick.  But what is the meaning of that kind of life? There would be no childrens, nephews playing around and to follow, while they grow up. I like the life on this Earth and see no happiness in a life after resurrection without children and with a lot of 1000+ years old methusalems.

Our Earth would become like a garden with everything working (growing etc) by itself. When you want to eat, you go out in the garden like to the store. Simply boring living in a vegetative state together with angels.

The new world like it is described in the Holy books would be a life like our indigeneous lived in the jungle  or in the Pacific before the white man came in and destroyed. They worked maybe 6 hours a day to get food. The rest of their time was consumed in the hammock making decorations and looking at the apes that jumped around in the threes above or at the Palm trees.

Oops. I am in a paradigm shift in my view of life.

I still believe however there is something called God, a God I perceive like a kind voice giving good advices. And I follow Jesus advices and teaching.

I ended up this “flight” of faith, reviewing the life before the collaps of Eden in the Middle East and a life after Resurrection. More about this in a future post.

To my question Is God cruel I say:

“No. God is expecting us to take care of this Earth.”