On Sunday 16 June the Holy Trinity was celebrated. (Source la chiesa.it ).  Many have argued against the trinity dogma that the Father, the Son, and the holy spirit together form one God, among others the Jehovah witnesses. 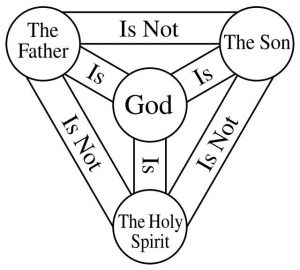 www.catholic.org  says that “The Trinity is the term employed to signify ….  that in the unity of the Godhead there are Three Persons:

and concludes that “these Three Persons being truly distinct one from another.”

And the Anastasian creed says “the Father is God, the Son is God, and the Holy Spirit is God, and yet there are not three Gods but one God.”

www.britannica.com defines Trinity as “the unity of Father, Son, and Holy Spirit as three persons in one Godhead.” God defined as

The Trinity Teachings began to be officially formulated in 325 C.E.

M;uslims understand the Christian Trinity as a kind of Polytheism as they often reply with the Quran 5:73 verse that says”there is no god except one God.”and Quran 112:1 that says  “He is Allah, [who is] One”

Muslims  believe in a  Pure Spirit sometimes translated as “The “Holy Spirit” (Quran 16:101 )

About Jesus we read in Quran 2:87  “And We gave Jesus, the son of Mary, clear proofs and supported him with the Pure Spirit”

But the Quranic  “the Pure spirit” is not to be confused with the Christian “Holy Spirit”.

The Quranic  “the Pure spirit” is a kind of antonomasia for Angel Gabriel. 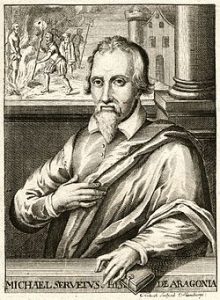 Miguel Serveto was convicted of heresy and sentenced to death 16 october 1553 and died in Geneva the day after.

His crime was that he could not reconcile the Trinity  teachings of the Protestant church with his own studies of the Bible.
He published “De trinitatis erroribus” and “Dialogorum de Trinitate” in Switzerland. In these books, Servetus built a theology which maintains that the belief of the Trinity is not based on biblical teachings but rather on what he saw as deceiving teachings of (Greek) philosophers.

In part he hoped that the dismissal of the Trinitarian dogma would also make Christianity more appealing to Judaism and Islam, which had remained as strictly monotheistic religions.

Muslims of course find that the trintity dogma is a heresy.

But also Jehovah witnesses dont agree with this dogma. read more in www.jw.org

God is of course one. But as the Universe has many dimensions (11?), God may not be seen as a bi or tri-dimensional entity.

There is a  good reason we should not make images of God as this gives a false image of God. God has no form, no shape.

But I personally believe God may reveal itserlfto us in different ways, maybe as www.britannica.com ecplained it: God in the shape of

I think it would be interesting to read more about Servetus ” deceiving teachings of Greek philosophers.”. What did the Greek philosophers say about God that inspired the Catholic Church to adopt the Trinity dogma?