36 “And I tell you this too: your cousin Elizabeth also, in her old age, has conceived a son, and she whom people called barren is now in her sixth month”, Luke (1:36),

I decided to deepen my knowledge about Jesus family relation to John, the Baptist.

is a figure in the New Testament Bible and the Quran,[1] hence venerated in Christianity and Islam.[2] In the Bible,

Zaccaria  is the father of John the Baptist, a priest of the sons of Aaron in the Gospel and the husband of Elizabeth.

Luke 1:36-27 tells:
Mary was told  by the angel Gabriel in Nazareth  that ‘The Holy Spirit will come upon you, and the power of the Most High will cover you with its shadow. And so the child will be holy and will be called Son of God.”Luke (1:5) Then the angel concluded

36 “And I tell you this too: your cousin Elizabeth also, in her old age, has conceived a son, and she whom people called barren is now in her sixth month”,  37 for nothing is impossible to God…..

Elisabeth and Zaccharias lives according to believes in Jerusalem in Ein Kareem, 80 km south in Judaea where Zacharias was a high priest.

According to Luke 1:39-40 Elisabeth left her family and made a 80 km trip to Jerusalem:

39 Mary set out at that time and went as quickly as she could into the hill country to a town in Judah.

40 She went into Zechariah’s house and greeted Elizabeth.

vohn was concieved  according to the angel 6 months earlier than Jesus so he was probably 6 months elder.  Luke 1:36

John the Baptist was believed to have been born in Ein Karem, Jerusalem where the Franciscans  built “The Church of Saint John the Baptist”. Read more in biblewalks.com or in web.archive.org. 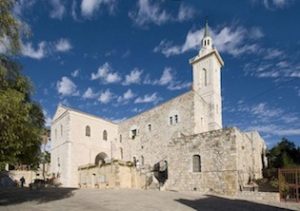 As Zacharias  was a priest in Jerusalem so John was for sure expected to follow the family tradition and become a priest him too.  But for some reason John did not.

80 “Meanwhile the child grew up and his spirit grew strong. And he lived in the desert until the day he appeared openly to Israel” (Luke 1:80 )

John the Baptist  may have moved north to the source of the Jordan river north of the Sea of Galilee near Bethsaida where he may  have got childrens as you will understand reading John 1:40-44 ) .

Andrew and Simon Peter, sons of John the Baptist, were the first followers of Jesus

40 One of these two who became followers of Jesus after hearing what John had said was Andrew, the brother of Simon Peter.

41 The first thing Andrew did was to find his brother… 42 and he took Simon to Jesus. Jesus looked at him and said, ‘You are Simon son of John”

About the mother of Andrew and Simon, there is a novel about John marrying a greek woman. read more in

After the baptizing of Jesus, Johns Gospel continues:

43 The next day, after Jesus had decided to leave for Galilee, he met Philip and said, ‘Follow me.’ 44 Philip came from the same town, Bethsaida, as Andrew and Peter.

“Bethany on the far side of the Jordan”

To not be confused with Bethany, the home of Lazarus in Jerusalem.

the exact  place were Jesus was baptised  is not known as the Jordan has changed course over the centuries. Today  Bethany beyond the Jordan is a Christian pilgrimage location. (Read more at www.seetheholyland.net  )

Jesus and john did not “know each other”

John 1:28,32-33 tells that Jesus and John met for the first time in “Bethany on the far side of the Jordan” and that they did not know each other before.

John and Jesus never met before the baptizing at “Bethany on the far side of the Jordan”  as they grew in distant parts of Israel, Jesus in Nazareth and John in Jerusalem.

But both must have heard about each other.

Read more about John  in https://www.catholic.org/saints/saint.php?saint_id=152 or look at this video

Read more about John in https://www.biography.com/religious-figure/saint-john-the-baptist

9  The Word was the real light that gives light to everyone; he was coming into the world. 10 He was in the world that had come into being through him, and the world did not recognise him. 11 He came to his own and his own people did not accept him. 12 But to those who did accept him he gave power to become children of God, to those who believed in his name 13 who were born not from human stock or human desire or human will but from God himself. 14 The Word became flesh, he lived among us, and we saw his glory, the glory that he has from the Father as only Son of the Father, full of grace and truth.

John witnesses about Jesus in Bethany

15 …He proclaims: ‘This is the one of whom I said: ‘He who comes after me has passed ahead of me because he existed before me.’ 16 Indeed, from his fullness we have, all of us, received — one gift replacing another, 17 for the Law was given through Moses, grace and truth have come through Jesus Christ. 18 No one has ever seen God; it is the only Son, who is close to the Father’s heart, who has made him known.’

19 This was the witness of John, when the Jews sent to him priests and Levites from Jerusalem to ask him, ‘Who are you?’

20 He declared, he did not deny but declared, ‘I am not the Christ.‘ 21 So they asked, ‘Then are you Elijah?’ He replied, ‘I am not.‘ ‘Are you the Prophet?’ He answered, ‘No.‘ 22 So they said to him, ‘Who are you? We must take back an answer to those who sent us. What have you to say about yourself?’ 23 So he said, ‘I am, as Isaiah prophesied: A voice of one that cries in the desert: Prepare a way for the Lord. Make his paths straight!‘ 24 Now those who had been sent were Pharisees, 25 and they put this question to him, ‘Why are you baptising if you are not the Christ, and not Elijah, and not the Prophet?’ 26 John answered them, ‘I baptise with water; but standing among you — unknown to you- 27 is the one who is coming after me; and I am not fit to undo the strap of his sandal.‘

28 This happened at Bethany, on the far side of the Jordan, where John was baptising.

Johns  encounter with Jesus in Bethany

Jesus comes to John at Bethany

29 The next day, he saw Jesus coming towards him and said, ‘Look, there is the lamb of God that takes away the sin of the world.

30 It was of him that I said, “Behind me comes one who has passed ahead of me because he existed before me.“

John must have heard about Jesus but they lived separately in two different towns. SO John says:

31 I did not know him myself, and yet my purpose in coming to baptise with water was so that he might be revealed to Israel.‘

32 And John declared, ‘I saw the Spirit come down on him like a dove from heaven and rest on him.

33 I did not know him myself, but he who sent me to baptise with water had said to me, “The man on whom you see the Spirit come down and rest is the one who is to baptise with the Holy Spirit.“

34 I have seen and I testify that he is the Chosen One of God.’

35 The next day as John stood there again with two of his disciples, Jesus went past,

36 and John looked towards him and said, ‘Look, there is the lamb of God.‘

37 And the two disciples heard what he said and followed Jesus. 38 Jesus turned round, saw them following and said, ‘What do you want?‘ They answered, ‘Rabbi’ — which means Teacher — ‘where do you live?’ 39 He replied, ‘Come and see’; so they went and saw where he lived, and stayed with him that day. It was about the tenth hour. 40 One of these two, who became followers of Jesus after hearing what John had said, was Andrew, the brother of Simon Peter. 41 The first thing Andrew did was to find his brother and say to him, ‘We have found the Messiah’ — which means the Christ- 42 and he took Simon to Jesus. Jesus looked at him and said, ‘You are Simon,  son of John; you are to be called Cephas‘ — which means Rock.

43 The next day, after Jesus had decided to leave for Galilee, he met Philip and said, ‘Follow me.‘

44 Philip came from the same town, Bethsaida, as Andrew and Peter.

45 Philip found Nathanael and said to him, ‘We have found him of whom Moses in the Law and the prophets wrote, Jesusson of Joseph, from Nazareth.’

46 Nathanael said to him, ‘From Nazareth? Can anything good come from that place?’ Philip replied, ‘Come and see.’”

Simon, the brother of Andrew and Andrew, seems to be the sons of John, the Baptist. As John is just 6 months elder, his sons must be very young, may teenagers.

44 Philip came from the same town, Bethsaida, as Andrew and Peter.

So John maybe was born and grew up in Bethsaida north of the Sea of Galilee that is maybe about 30 km from Nazareth.

But this is contraticted by Luke in

“”39 Mary set out at that time and went as quickly as she could into the hill country to a town in Judah. 40 She went into Zechariah’s house and greeted Elizabeth.” (Luke 39-40  ) But Judeah is about 80 km away from Nazareth. “Judaea was the upper hill country, known as Har Yehuda (“Hills of Judaea”), extending south from the region of Bethel (at present-day Ramallah) to Beersheba and including the area of Jerusalem, Bethlehem, and Hebron.” (Source:www.britannica.com ) It is questionable if the author of Lukes gospel, really knew the geography of that area. Luke had Mary to travel from Nazareth to Betlehem outside Jerusalem, when she was in her ninth month of pregnancy.

Bethsaida
The historian Josephus says that the town of Bethsaida – at that time called Julias (Greek: Ἰουλιάδα), was situated 120 stadia from the lake Semechonitis, not far from the Jordan River as it passes into the middle of the Sea of Galilee.

“Now Jordan’s visible stream arises from this cavern, and divides the marshes and fens of the lake Semechonitis; when it hath run another hundred and twenty furlongs, it first passes by the city Julias” Source: Jewish War 3.10.7)