Going to Catholic Mass I asked myself for years what I was really eating. I came with time to an answer, which I will share in the conclusions below.

I will in this post analyze Jesus bread-body, wine-blood metaphor

“29 Now it happened that when he was near Bethphage and Bethany, close by the Mount of Olives as it is called, he sent two of the disciples, saying, 30 ‘Go to the village opposite, and as you enter it you will find a tethered colt that no one has ever yet ridden. Untie it and bring it here. 31 If anyone asks you, “Why are you untying it?” you are to say this, “The Master needs it.” “

“He said to them, ‘Look, as you go into the city you will meet a man carrying a pitcher of water. Follow him into the house he enters 11 and tell the owner of the house,’ ‘The Master says this to you: ‘Where is the room for me to eat the Passover with my disciples?’ 12 The man will show you a large upper room furnished with couches. Make the preparations there.”

These are two examples of God’s omnipresence and a quantum entanglement between God and Jesus.  I wrote about entanglement on one of my pages. Back to the issue of this post:

13 They set off and found everything as he had told them and prepared the Passover.

14 When the time came he took his place at table, and the apostles with him.

15 And he said to them, ‘I have ardently longed to eat this Passover with you before I suffer;

16 because I tell you, I shall not eat it until it is fulfilled in the kingdom of God.’

17 Then, taking a cup, he gave thanks and said, ‘Take this and share it among you,

18 because from now on, I tell you, I shall never again drink wine until the kingdom of God comes.’

19 Then he took bread, and when he had given thanks, he broke it and gave it to them, saying, ‘This is my body given for you; do this in remembrance of me.’

20 He did the same with the cup after supper, and said, ‘This cup is the new covenant in my blood poured out for you.

21 ‘But look, here with me on the table is the hand of the man who is betraying me.

22 The Son of man is indeed on the path which was decreed, but alas for that man by whom he is betrayed!’

23 And they began to ask one another which of them it could be who was to do this.”

As Caiaphas has written in his execution report according to Mahan:

“when in danger, He said that once every year we should roast a kid or lamb, and eat it with unleavened bread, and this should be the sign that we would trust in Him in all times of danger. Now Jesus teaches that common bread and wine are to be used instead thereof a thing unheard of.” (Source: Archko Volumes p 95) 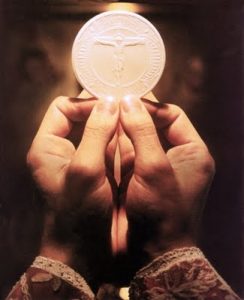 We know that bread was often sourdough bread and it was not food for everyone. In Rome it was important to give bread for free to avoid uprises and rebellions among the Romans. We must remember that there were no sugar, no potatoes nor rice in the middle east. So bread was the main energy resource.

Wine was a c-vitamine rich nourishment for the poor but a inebriant for the rich people. We know from the greeks that wine was regarded as a  drink of sincerity but for the Persians it was bad if consumed during important decisions.

Jesus  invited the disciples to eat  bread and drink wine at the last supper, by saying

The disciples have heard this bread-body and wine-blood metaphor before and maybe undestood it in Jerusalem as Jesus explained it for a group of Jews in Capernaum.

Then they said to him, ‘What must we do if we are to carry out God’s work?’

Jesus gave them this answer, ‘This is carrying out God’s work: you must believe in the one he has sent.’

So they said, ‘What sign will you yourself do, the sight of which will make us believe in you? What work will you do? Our fathers ate the manna in the desert; as scripture says: He gave them bread from heaven to eat.’

The Jews did not understand Jesus was to let himself be sacrificed by the Jews as “the bread from heaven”.It is not surprising that…

” the Jews started arguing among themselves, ‘How can this man give us his flesh to eat?’ The Jews did not understand Jesus’ metaphor “I am the living bread” Do we?

I have thought for years about Jesus “Eat my body” and “drink  my blood.” After reading about Spinoza  pantheistic view. I am still  convinced that Jesus  most probably also meant that the bread as any other food is the body of God. God materialized or incarnated according to Einsteins E=mc2.

What did Jesus mean with “Anyone who eats this bread will live for ever;” ?

We can of course not eat his body. But I understand that we can eat any bread and drink any wine in remembrance of Jesus”

If we do that then  we show we believe in God and the message of Jesus.  And like bread and wine we get energy and wisdom by listening to Jesus. I have experienced that many times in my life. And I am looking forward to met Jesus again after a resurrection.

The  thougth  that a bread is the body of God, gave me a completely new value of the communion

I look forward to participate at the Catholic Sunday mass as I feel like spiritually nourished by the unleavened host. And how many times have I not ending up weaping silently in happiness like a drunk man. 🙂

This eat my body drink my blood metaphore led me to make a few revisions to my “enlightened Genesis Creation Story” to make it a description about how God materialized as the Universe with the Human being as an image of God. I wanted to see how a pantheistic hypothesis would look like in a Creation Story described by a “pantheistic God”.

If you want to read it, go to