At todays Catholic mass we read John 8:4-11 about the woman caught to be adulterous and  sentenced to death by lapidation according to the Mosaic law and Jesus view on this case.  Jesus knew that God does not want use dead sinners but alive sinners that  will have the possibility to convert.

18% of the Italians think that the hebrews killed Jesus according to  a article in ww.lastampa.it

Caiaphas the highest priest in Jerusalem may have written a report to Pilate with the charges  behind the Jesus death sentence.  This report is to be found in the so called archko volumes created by William Dennes Mahan, a American prebitarian priest. Because of this book he  was convicted by an ecclesiastical court of falsehood and plagiarism.  Mahan was therefore convicted and suspended from the ministry for one year.  (Wiki ) So we can not be sure that Caiaphas reports in the archko volumes are genuine documents.

These reports may however bring some idea about who really sentenced and killed Jesus. 18 % of Italians believe that the Hebrews killed Jesus. The Caiaphas reports tells me not to agree with these Italians.

says:  ‘Master, this woman was caught in the very act of committing adultery, and in the Law Moses has ordered us to stone women of this kind. What have you got to say?’  They asked him this as a test, looking for an accusation to use against him. But Jesus bent down and started writing on the ground with his finger.  As they persisted with their question, he straightened up and said, ‘Let the one among you who is guiltless be the first to throw a stone at her.’  Then he bent down and continued writing on the ground.  When they heard this they went away one by one, beginning with the eldest, until the last one had gone and Jesus was left alone with the woman, who remained in the middle.  Jesus again straightened up and said, ‘Woman, where are they? Has no one condemned you?’  ‘No one, sir,’ she replied. ‘Neither do I condemn you,’ said Jesus. ‘Go away, and from this moment sin no more.'”

Jesus does not suggest a change to the law about adultery.  He opposses on how and by whom the sentence is executed. Jesus was presumably without sin and could have trown the first stone but he didn’t. He understood that God does not want dead sinners but sinners alive to be able to convert.  He alway emphasized on the existence of a understanding, tollerant and forgiving God. That was not the God  of the Hebrews.

His action was not liked the the priesthood in Jerusalem.  Caiaphas gives a reasonable explanation in his report why the priesthood did not like this kind of tollerant and forgiving God.

Caiaphas is an aristocrat member of one of the ruling Jewish sects, the Sadducees, a religious movement in Judaea that found most of its members among the wealthy Jewish elite.(Wiki ) Caiaphas later inherited the High priest position by Valerius Gratus year 18 e.Kr. and held that position until Easter 37 when he was substituted by  Lucius Vitellius, ( www.newworldencyclopedia.org )  he had this long term probably because  he was very cooperative and friendly minded with the Romans.  You understand this by the report. Learn more in www.gotquestions.org  and in these two  videos:

The report is to be found inThe archko volumes pu together by William Dennes Mahan as said in my introduction Mahan  was convicted by an ecclesiastical court of falsehood and plagiarism.  he obviously copied a short story by Joseph Méry published in Revue de Paris in 1837 and a novel from ben-Hur Mahan was therefore convicted and suspended from the ministry for one year.  (Wiki ) Mahan tells in the first chapter that he got part of the documents from a German called Whydaman who said he visited the Vatican library and got documents there. Mahan says he went himself later to the Vatican library and to the lbrary in Constantinople.

Even if the document are not certified to be authentic copies of a antique document, I decided to share  Caiaphas report 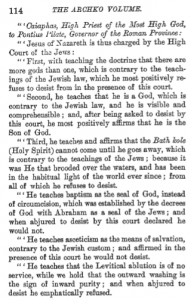 You find however the  full text at archive.org

“The archkovolumnes is a series of reports from Jewish and pagan sources contemporary with Jesus that relate to the biblical texts describing his life. The work went through a number of versions and has remained in print ever since. The texts are otherwise unknown, and the author was convicted by an ecclesiastical court of falsehood and plagiarism.” ( Wiki and E.J. Goodspeed, Modern Apocrypha (Boston: Beacon Press, 1956), 40. ) So the texts in this book must be read with this in mind. Some or all of it may be fiction..

In the report from Caiaphas you find the charges with whose Caiaphas  sentenced Jesus to death. These were:

Caliphas is not happy with the way Jesus was put to death and  concludes his report with:

“These charges were written by my scribe, and sent with the officers to Pilate for his consent. It seems that Pilate thirsted for his blood. Like all guilty tyrants, he was afraid of his own shadow, and wished to destroy everything that threatened his power. I expected Pilate to send Jesus back to me, so that I could send him to you for your approval ; and i! so, then I could proceed to try Mm with Urim and Thummim, with the regular lacJdees on uard, as our law requires ; but It seems that Pilate thirsted for his blood”

“although he has not been preaching over three years, he has more followers to-day than Abraham has, and they have become perfectly hostile toward the Jews that are faithful to their God ; and, if it Had not been for the Roman soldiers, on the day of His execution we would have had one of the bloodiest insurrections ever known to the Jewish commonwealth.”

I find the report of Caiaphah  to be supported in the Gospels According to this doc you can see that the Adulterous case never ended up in a charge.

Caiaphas was in the report very negative to the view of a forgiving God that he defines as week. Quite areasonable view for a Hebrew  believing strongly in a old testament eye for an eye God. But I didnt expect the description of Jesus as made in his “concerning the resurrection report” in chapter 7.

“when I lifted up my eyes, behold Jesus of Nazareth stood before me. My breath stopped, my blood ran cold, and I was in the act of falling, when he spoke and said, Be not afraid, it is I. You condemned me that you might go free. This is the work of my Father. Your only wrong is, you have a wicked heart; this you must repent of. This last lamb you have slain is the one that was appointed before the foundation ; this sacrifice is made for all men. Your other lambs were for those who offered them ; this is for all, this is the last ; it is for you if you will accept it. I died that you and all mankind might be saved.* At this he looked at me with such melting tenderness that it seemed to me I was nothing but tears, and my strength was all gone. I fell on my face at his feet as one that was dead.”

In the report it is clear that the sentence and execution of Jesus was requested by the priesthood and the Romans as they saw in Jesus a istigator and leader of a resurrection. Many Hebrews followed Jesus and thousands were at the execution asking why he was sentenced.

“Jesus died as a Hebrew”

I dont think that this  help those who think that the Hebrews killed Jesus. I advice instead to look closer at this report to see if there is a genuine original in the Vatican Libaary as Mahan claimed 100 years ago.