“Jesus is God that saves us” said the bishop at the mass in Assisi February 10. The reading today was that of Luke 5:1-11 about Jesus helping the fishermen get huge quantities of fishes and telling the disciples that  “ from now on it is people you will be catching”

Seeing the miracles Jesus did (read my post about Jesus miracles in http://www.kinberg.net  ) It is not strange that his disciples may have thought “Jesus is God” and that the Catholic continued adding this belief in their dogma.

As Tim Augustyn says in unlockingthebible.orgy-that-jesus-is-god/ : “the Christian belief that Jesus is God is not a simple misinterpretation of two or three passages, nor is it based on one or two obscure passages. This theme is pervasive and emphasized in the four Gospels and in the New Testament letters.”

“I and the Father are one”

Jesus said according to John 10:30“I and the Father are one”

What does “I and the father are one” really mean and imply?

Jesus often talked about God as his father. Father can be understood as “my Creator” or spiritual father.

I would rather read “I and the father ” like “I and God are soulmates” or like “I am an image of God”. But this is valid for all of us, not only Jesus.

I could myself say “my dog and I and are one.” like being soulmates but that doesn’t mean that I am a dog. 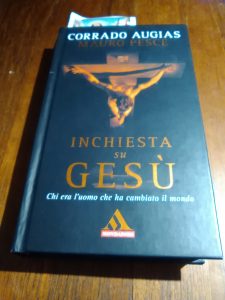 Reading “Inchiesta su Gesù” (Corrado Augias and Mauro Pesce, page 18) I was reminded that  Jesus preferred to talk about himself as “Son of Man” instead of Messiah. I think this fact is important to consider thinking about who Jesus is.

If Jesus was God there would be no reason for Jesus/God to deny that.  The Jews would immediately test Jesus, trying to kill him, something they did later but for other reasons.

the “Son of man” title has been used several times in the Old testament. See eg see Psalm 80:17 “Let your hand rest on the man at your right hand, the son of man you have raised up for yourself.“

Ezechiel said in Ezechiel 2:1 “He said to me, “Son of man, stand up on your feet and I will speak to you.”

In Daniel 7:13-14 Daniel says “I continued to observe the night vision—and look!—someone like the Son of Man was coming, accompanied by heavenly clouds. He approached the Ancient of Days and was presented before him. To him, dominion was bestowed, along with glory and a kingdom, so that all peoples, nations, and languages are to serve him. His dominion is an everlasting dominion—it will never pass away—and his kingdom is one that will never be destroyed.”

The disciples of Jesus regarded him as a Messiah. But Jesus was a humble man that preferred the designation “Son of man”, probably the one defined in Ezechiel. I believe so  as Jesus in Jesus once said  “just as the Son of Man did not come to be served, but to serve, and to give his life as a ransom for many.” Matthew 20:28,

The definiton in the book of Daniel “all peoples, nations, and languages are to serve him.” is not what Jesus asked for.

In Aramaic Jesus said at the cross shortly before dying

Muslim sources refer to the fact that Jesus was tempted by the devil in the desert and God/Allah would never allow that or Satan would never be able to do that as God has more power than Satan.

Presuming that  Christians are right, that Jesus really is God, ” the devil in the desert temptation” story could be a way for God to warn us humans “Be careful of the Whisperings of the Devil.” .

Muslims and Christians agree however that  Jesus could do miracles. Jesus could according to the Gospels, see things only Allah could (e.g. people and donkeys moving around in Jerusalem ) when he was outside Jerusalem.

About Jesus being god, the Muslims are right in their arguing that a God would not be “tempted” by the devil as Jesus was in the desert. Quran 17/111 says ““and not is for him a partner in his dominion”  Muslims conclude therefore hat “Jesus is therefore not God.”.

and not is for him a partner in his dominion”

Jesus certainly did not mean that he and God were a partner in the dominion”. Everything was done with the permission of God, Jesus worshipped many times.

But Muslims recognize Jesus was the only one who could make miracles.

As Quran 2:87 writes  “We gave ‘Îsa (Jesus), the son of Maryam (Mary), clear signs and supported him with Ruh-ul-Qudus”

Some miracles show that  Jesus may have been “quantum entangled” with Allah. Jesus could see things Allah could (e.g. see people and donkeys moving around in Jerusalem when he was outside, know names and story of the Samaritan woman, etc.).

Maybe Jesus in his “Me and my father are one” talked in the sense of being able to do miracles, have divine sight and knowledge, and have the same goals. I understand from the Gospels and Jesus praying that God decided over Jesus..

Is Allah the father of Jesus ?

Who is the biological father of Jesus?  Whose man’s DNA did Jesus inherit? of course not Gods.  Quran 112/3 says

When Jesus talked about “his father” he of course didn’t intend “my biological father that shared with me his DNA” I presume Jesus looked at God as a “spiritual father”a father in the sense of his Creator in the womb of Mary. The Quran never specifies the kind of sonship.

Muslims correctly claims Jesus was not God’s son in the biological sense of the word. But since Muslims recognize that Mary was a virgin who is the biological father of Jesus?.

According to Christianity Jesus is God incorporated.

But Jesus himself always talked about God as “my father” and himself as “Son of Man” or in Hebrew “Elohim”.

Jesus emphased the difference between him and God.

The Quran confirms this ifference in position. God is one (despite the frequent use of “we”:

Jesus (Isa in Arabic) is a Messenger as Quran 2:87 writes  “We gave ‘Îsa (Jesus), the son of Maryam (Mary), clear signs and supported him with Ruh-ul-Qudus”

I rely on the words said by Jesus according to the Gospels as It is obvious for me that that it is the father/God/Allah that decides what can be done or not.  The Quran emphasizes this and has to, to be coherent with the fact that there is only one God.