December 28. This is excerpt 7 from a page about Jesus I am working with and will publish in its final form after Easter 2019. It is important to know that the translation of the New testament written in Hebrew, Latin and Greek was prohibited by the catholic church. They wanted to have the sole right to the true Bible maybe to hide bad translations and erroneous dogmatic belief conclusions.

Decree of the Council of Toulouse (1229 C.E.): “We prohibit also that the laity should be permitted to have the books of the Old or New Testament; but we most strictly forbid their having any translation of these books.”

The jews may have wonder at this time if the Catholic Church was trying to steal their sacred texts for their own purposes.

Ruling of the Council of Tarragona of 1234 C.E.: “No one may possess the books of the Old and New Testaments in the Romance language, and if anyone possesses them he must turn them over to the local bishop within eight days after promulgation of this decree, so that they may be burned…”
( Source: http://www.justforcatholics.org  )

The Bible did not exist in other languages than Hebrew,  Latin and Greek. 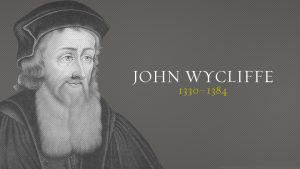 John Wycliffe translated the Bible to English and was sentenced to death for this, 1384.

Wycliffs handwritten  translated Bible circulated however illegally. But owner of  his translation were all accused of heresy and sentenced to death at the stake by burning. 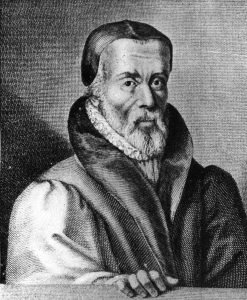 William Tyndale born 1494 hated the Catholic Church banishment of the English Bible. he was also one of the few who understood Greek and Latin.  he also understood German. As England was Catholic and his life in danger, he fled to Germany.

In Germany there was a  Lutheran  German version of the New Testament available.

William made there in Germany a  new English translation of the Greek New Testament (NT) with  a language that everyone could understand. His NT  was printed in huge quantities in Antwerpen. As his NT fit  a small book it was easy for everyone to hold and also to smuggle to England.

“Studying the NT, William Tyndale came to denounce the practice of prayer to Saints. He understood that Man’s salvation from first to last depends on God alone. ” ( Source: Wiki )

William Tyndale was caught in Antwerpen, held in prison in Belgium and  sentenced 1535 to be burned to death in England.

He finally was strangled to death while tied at the stake October 1536, and then his dead body was burned”. 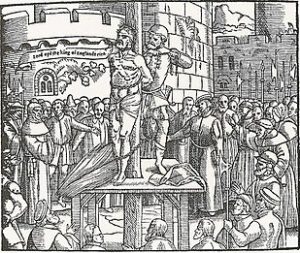 15 years after his death the William Tyndale NT became legal because the King of England wanted to divorce but could do that only by becoming a Protestant.

See the story in this video:

The Catholic church may have wanted to hide that

‘In early times, the Bible was read freely by the lay people, and the Fathers constantly encourage them to do so, although they also insist on the obscurity of the sacred text. No prohibitions were issued against the popular reading of the Bible. New dangers came during the Middle Ages. When the heresy of the Albigenses arose there was a danger from corrupt translations, and also from the fact that the heretics tried to make the faithful judge the Church by their own interpretation of the Bible. To meet these evils, the Council of Toulouse (1229) and Tarragona (1234) forbade the laity to read the vernacular translations of the Bible. Pius IV required the bishops to refuse lay persons leave to read even Catholic versions of the Scripture, unless their confessors or parish priests judged that such readings was likely to prove beneficial.’

I added this story to the top abuse of power list in www.kinberg.net/wordpress/stellan/2018/04/16/abuse-of-power