I decided to split this post into two pages, one dedicated to Mary and one to Jesus. They will hopefully be published at the end of November.

Almost everyone  in this world knows about about the Christian belief that  Jesus was born from virgin Mary. But not many knows that this is also told about in the Quran.

There are contradiction in both the Christian belief as well as in the Muslim one. I will discuss these in this article. 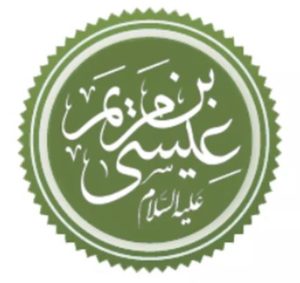 The name “Jesus, son of Mary” written in Arabic calligraphy,
followed by “peace be upon him.” بلال الدويك
(  Source: https://www.vox.com  )

I have never had any doubt about  that, after reading the Gospel and the Quran about Jesus and what happened in the Roman Empire after the spreading of his messages and information about his life and death.  But many  atheists question the existence of  Jesus as among others he is not mentioned by the many normally very precise Roman Empire historians like e.g.   Herodotus  and Tacitus.

“John 10:30 ” reports that Jesus said “I and the father are one” But does that mean Jesus said “I am God” I strongly doubt that as he often talked about God as his father (for me “father” can be understood as “my Creator”). I would rather read “I and the father ” like “I and God are soulmates” or like “I am a image of God”. But this is valid for all of us, not only Jesus.

I could myself say “my dog  and I and are one.”  like being soulmates  but that doesn’t mean that I am a dog.

Muslim sources refer to the fact that Jesus was tempted by the devil in the desert and God/Allah would never allow that or Satan would never be able to do that as God  has more power than Satan.

Presuming that  Christians are right , that Jesus really is God, ” the devil in the desert temptation” story could be a way for God  to warn us humans  “Be careful of the Whisperings of the Devil.”

Muslims and Christians agree however that  Jesus could do miracles. Jesus could  according to the Gospels, see things only Allah could (e.g. people and donkeys moving around in Jerusalem ) when he was outside Jerusalem.

Aboutr Jesus being god, the Muslim are right in their arguing that a God would not be “tempted” by the devil as Jesus was in the desert. Quran 17/111 says ““and not is for him a partner in his dominion”  Muslims conclude therefore hat “Jesus is therefore not God.”

Jesus  certainly did not meant that he and God were partner in the dominion”. Everything was done with the permission of God, Jesus worshipped many times.

But Muslims recognize Jesus was the only one who could make miracles.

Some miracles show that  Jesus may have been “quantum entangled” with Allah, thinking that Jesus could see things only Allah could (e.g. see people and donkeys moving around in Jerusalem when he was outside, know names and story of the Samaritan woman etc.).

Maybe Jesus in his “Me and my father are one” talked in the sense of being able to do miracles, have divine sight and knowledge and have the same goals. I understand from the Gospels and Jesus praying that God decided over Jesus.

Is Allah the father of Jesus ?

Who is the biological father of Jesus.  that is whose mans DNA did Jesus inherit? of course not Gods.  Quran 112/3 say

When Jesus talked about “his father” he of course didn’t intend “my biological father that shared with me his DNA” I presume Jesus looked at God as a “spiritual father”a father in the sense of  his Creator in the whomb of Mary. The quran never specifies the kind of sonship.

Muslims correctly claims Jesus was not Gods son in the biological sense of the word. But since Muslims recognize that mary was virgin who is the biological father of Jesus?

In the Quran we can read about Mary and Jesus:

” And [mention] the one who guarded her chastity, so We blew into her [garment] through Our angel [Gabriel], and We made her and her son a sign for the worlds. ( Quran 21:91 )

“And We did certainly give Moses the Torah and followed up after him with messengers. And We gave Jesus, the son of Mary, clear proofs and supported him with the Pure Spirit.” ( Quran 2:87 )

The Quran mentions a few miracles miracles. Like  this one about the table where Jesus asks Allah for a miracle, talked about in mentioned in  www.islamreligion.com :

“When the disciples said: O Jesus, son of Mary!  Is your Lord able to send down for us a table spread with food from heaven?  He said: Observe your duty to God, if ye are true believers.  They said: We desire to eat of it and our hearts be at rest, and that We may know that you have spoken truth to us, and that We may be witnesses thereof.  Jesus, son of Mary, said: ‘O God, our Lord, send down for us a Table laden with food out of heaven, that shall be for us a recurring festival, the first and last of us, and a miracle from You.  And provide us our sustenance, for You are the best of providers!” ( Quran 5:112-114 )

The Quran clearly tells the Jesus does miracles always with Allahs permission.

And [make him] a messenger to the Children of Israel, [who will say], ‘Indeed I have come to you with a sign from your Lord in that I design for you from clay [that which is] like the form of a bird, then I breathe into it and it becomes a bird by permission of Allah . And I cure the blind and the leper, and I give life to the dead – by permission of Allah . And I inform you of what you eat and what you store in your houses. Indeed in that is a sign for you, if you are believers.

I have not seen this in the Gospel.In a( Quran 3:49 ) above Jesus brings life to a claybird like God did creating Adam.

The sacrifice of Jesus

The doctrin of Christianity is that “Jesus died on the cross for the   sins of humans. If we accept this your will be saved” a explanation noone ever could give me acceptable explanation of. Why should Jesus suffer such a dead for our 21th century humans sins? All sinners the cause  of the horible death of Jesus? It sounds like God condemned jesus to death because we were the sinner.

Muslims do not accept that Jesus was killed as “Allah would not have permitted that a messenger like Jesus  would have been treated like that”. I supported for long time this idea a s there is a tomb in Srinagar, India that supports it.

I have found however another explanation why Allah let Jesus die like this. I have:

Thanks to Jesus good example of accepting and tollerating suffering,  poor Christians in Rome were able to met  horrible tortures and death with extreme courage, a courage that impressed even Roman soldiers so strongly that some of them and even a Legion  onverted to Christianity and became themselves martyrs.

A Christian church inside a Roman army fortress in Megiddo, Israel was discovered in the 1990’s.

The small church was created from a back room in the fortress by Christian soldiers stationed there. The fortress served as the military headquarters of the Legio II Traiana (“Trajan’s legion”) and Legio VI Ferrata (“Ironclad Legion”). Maybe even these two legions were slaughtered. (Source: earlychurchhistory.org )

Whatever happened with Jesus or whatever the reason of his martyrdom were, them the most important is that Jesus gave us good ethical rules to become good humans and be able to met evil in a successful way (” Do not judge and love your neihbor and enemy”). Thanks to Jesus we have today many good examples of  kindness and love around the world as well as good behaviour fighting evilness like  with “passive resistance“. Following Jesus  example and messages we  have better possibility to be resurrected for a happier life.

Did Jesus die on a cross or on a stake?

This is really an  irrelevant question. But I explain below the reason iigive this question so much space.

“Crucifixion was such a gruesome and humiliating way to die that the subject was somewhat of a taboo in Roman culture, and few crucifixions were specifically documented. One of the only specific female crucifixions we have documented is that of Ida, a freedwoman (former slave) who was crucified by order of Tiberius.” (Source: Wiki  )

Some say that the cruxifixion and hand nailing of Jesus is prooved by the schroud in torino, Italy.

But the examination of it shows that “Blood pattern analysis (BPA) of the blood marks on the Shroud of Turin show that they are non-realistic.”

The cross/stake question is interesting as its  answer reveals how the Gospels  like the old testament have been erroneously translated from Greek. The Witnesses of Jehovah talk a lot about this,   to explain why the  jehovahs-witnesses doesn’t worship  images  of Jesus on a cross. They say that the “Bible indicates that Jesus did not die on a cross but rather on a simple stake.”  (source: https://wol.jw.org/en/wol/d/r1/lp-e/1101989219 )

Erroneous translation in all the Gospels.

The Jehovahs witness looks to be be correct. You can see this “stake-cross” mistranslations in all the Gospels.

You find all these mistranslations googleing with the text
cross /site:biblehub.com/interlinear

My Lutheran priest here in Sweden aknowledged that this mistranslating is a fact. I decided  therefore to “amputate” my  golden cross to resemble a pole.

I have however now to the idea that Jesus had  to carry the horizontal beam (patibulum in Latin) to the place of execution, but not the whole cross as it is to heavy. Jesus tied to the horizontal beamand was appended  on a stake so it looked like a  T as Morgan Freeman illustrates it in his video  “The story of God” from minutes 17:40.

For me it is enough that Jesus is a prophet, a prophet that could do miracles. like the Muslims believe.

Jesus is not God for me. God decides over all of us, even Jesus.

We are all sons of God in a metaphorical sense as God created us all.

of course God does not get children in the biological meaning of it.

I believe in the miracles as I think that God can do anything, like he created the Universe.

there are a lot of misunderstanding between different religions as believers have their own conception of things. We must do our best to understand each other and to achieve this the only solution is dialog.