With Jesus our ancestor in Middle East could experience a physical manifestation of God through Jesus miracles.

Now 2000 years later we are talking about a physical manifestation of God in our brain.

I will focus this post on what was said in these two youtubes.

Michael Fergusson is a Neuroscientist in cognitive neurology at Harvard Medical School.

FMRI were made with Christian believers lieke.g. Pope Francis.

They were asked to press a button when they had a Spiritual experience of God. In those moments three areas were activated:

the scientists call it the neuro spiritual system

Michael Ferguson made this nice observation:

“when Jesus describes heavenly  rewards,
neuroscientsts are illuminating the biological embodiment of these ancient metaphor”

“the religious movement of Joseph Smith describes the Spirit of God like a
fire burning …  a wonderful warm glow it makes you want to do good and be good. Iit may be the emotion that moral psychologist Jonathan Hite refers to as elevation.
the frontal attention regions are probably acting in concert with the
nucleus accumbens in order to amplify the phenomenal content of this religious experience” 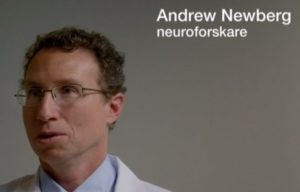 Morgan *Freeman met Andy Newberg a neurotheology neuroscientist in Philadelphia who studies what happens in our brain when we have religious experiences.

Mogan asks “Can i see Gods presence in my brain?”
The activity in Morgans frontal lobe increased during meditation just like Nuns being with God/allah or Buddhists metidating. 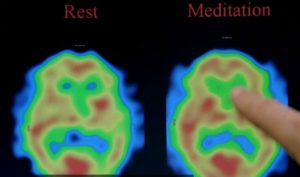 A Atheist contemplating at God were not that successful. The Atheist could  raise frontal lobe activity only a little. 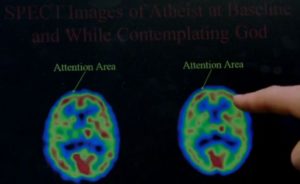 Andrew Newbergs conclusion:
“Regardless of what your practice is, the key is if you believe it. The whole brain gets involved in faith.”
Morgan concludes: “Experiencing the divine actually changes the brain and the way we see the world.”
Yo may read more about Andrew Newbergs research in
https://www.npr.org/2010/12/15/132078267/neurotheology-where-religion-and-science-collide?t=1533577795361
.

I am personally skeptic in considering the neuro scans to be a proof of a divine presence or a God manifestation.

I would rather prefer to say that those MRT scans show the brain reacts on divine belief and divine experiences. But that is just my hypothesis.

God has however  the power to “play” with Quantum physics rules , like Jesus did once as God is in my belief, the Creator of these. God is therefore able to show up in any kind of  incarnations (Avathars) or any other way.

You may look at this interview with Andrew where he share his opinion about the “conflict” between religion and “Science”. He makes a good effort to solve that millennial conflict many humans have. To bring peace in this “conflict” has been my effort long time now .  My last effort ended up  describing   a new  “theoscientific” Creation view in the   “Enlightened Genesis“.