i studied thermodynamics many years ago and came to learn about entropy that describes the state of a system, the state of disorder.  To make an example, a egg has low entropy (low disorder) If you scramble it, the entropy (disorder) raises.  As you know you can not unscramble a egg. Similarly, if you put a piece of ice in a cup of warm juice, the peace of ice (with low entropy) will melt (get higher entropy) . it is unlikely you can reverse that system to get the piece of ice back in your warm juice.

I associate a system with high entropy with disorder, chaos. while a system with low entropy is a form of order. Entropy could be defined as a description of the degree of disorder.

Mathematician have discovered the strict mathematical constants and equations ( the Mandelbrot set :

) lying behind that apparent chaos in images like this one: 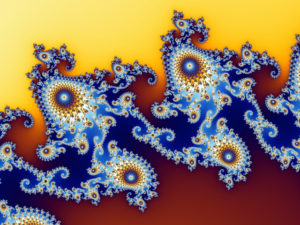 Chaos and order are not the same word. But chaos is normally a system of high entropy. I like to visualize high entropy with chaos even if that is not always correct. E.g. a wood may seem chaotic in our point of view but has really a high state of order.

In our Biosphere everything get higher entropy that is, build up  chaos with time. All living creatures disrupt with time and finally die. This because the ordered DNA get disrupted  during the many replications.

Nature is so well constructed that a seed grows up to  a ordered system, a beautiful plant. But that happens only thanks to the sun that nourishes the plant with photons so it can build up its ordered structure according to the inherited program (DNA)

Not to forget that the low degree of disorder in ice is created in lack of heat. So water and gases behaves in a different way.

disorder in our homes and cleaning up

Children tend to raise disorder in their living space. It is a sideeffect , we adults (parents most of all) have to live with  Their creating disorder  leads to a raise of intellectual order in their brain, that is learning. Cleaning up the room is the same as lower the entropy (disorder) of it.

other examples of entropy and how to use it in engines.

A theological view of the thermodynamics of entropy.

God/Allah has created a system (our Universe)  that is so well programmed that it, out of a extremely high disorder, by itself builds up order, the order of which we can use for our own survival.

Before  Salat it (Muslim prayer) is important to clean yourself and the prayer room. That is a form of showing thankfullness to our Creator that gave us life (=order.) God loves life and order. Shaytan (Iblis) on the contrary does not like order (disorder=death, suffering). Where Iblis has taken over, you see very high disorder, destruction and death.

I invite you to Look at and meditate over  this video. Compare the order good humans created with the help of God, before the war and the disorder after the war.

It is very important to remember that we can not say, its the devils fault.  We were given a brain with a intelligent reasoning frontal lobe, so we  can normally choose whose what whispering we want to listen to. The whispering of the devil or the whispering of God.  We have also  learned to distuinguish between evil and good. So no excuses for our bad behaviour.