There were unfortunenately clouds outside my kitchen window in Älghult, Småland, Sweden It took a while until I discovered the eclipsed moon appearing from behind a tall tree.  I succeeded to set up my Canon 50D with tele, Hähnel Giga Giga T Pro remote control. At that time  it was 11:30pm and the eclipse was not total anymore.

and got this image with the moon left side still in the Earth penumbra: 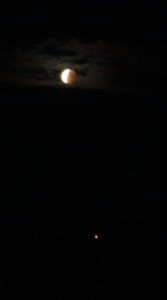 As I could not get both Mars and the Moon in one view with my tele, I decided to make a photo with  Gimp where I added the moon taken with tele to the photo above. The photo below  that I got, gives an idea how I saw the Moon and Mars from my windows.