I got info today from fermilab about the female genious Emmy Noether born 1923 in Germany. She  was a mathematician that  developed the  beautiful Noether Theorem.

As she had a jewish heritage she had to emigrate from Nazi Germany to USA, Pensylvania were she died  young, 14 April 1935 (aged 53) after a surgery and fever.

Fermilab’s Dr. Don Lincoln tells us about her and explains her theorem:

Her theorem is important because

Einsteins said about her: 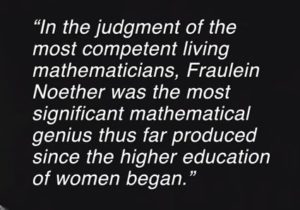