When you read the info in sweden.se

“a system that ensures everyone equal access to health care services. ”

I have compeletely different experiences. The reality is not like Sweden.se paint it.

I had deep cough two years ago in Italy. They made a X ray immediately and could after 2 hours exclude pneumonia.

I got pneumonia 8 years ago here in Sweden. I waited from 8 pm until 3 am the next day in a corridor. A doctor came and said “Let say you have renal calculi” He sent me home with the recommendation to not drink.

The evening after, again feeling horrible at the hospital waiting another 9 hour. A doctor from Iran came at 2 am and talking with me, he understood I did not have kidney problems. He immediately sent me to make a X-ray where they discovered I had the lungs full of water.

90 years old waiting eleven hours in the acute corridor -she died there. 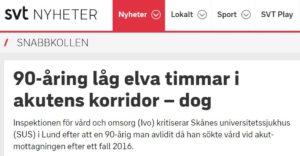 The Inspectorate for Health and Care (Ivo) criticizes Skåne University Hospital (SUS) in Lund after a 90-year-old man died when he sought care at the emergency room after a fall in 2016.

The healthcare staff believed that the man also suffered from pneumonia and decision was taken to move to the care department. But there was no place, and instead he remained in the corridor of the acute for eleven hours.

He had neither food nor drink nor any other care. He was moved to the central hospital in Kristianstad, where he died the day after the cardiac arrest.

A year ago someone called 112.  They said @Talek a cab to the hospital.” A sicki human being  died because of that.

e have elections here in Sweden and one of the parties goes out sying that the public health care  Responsibility  must not be devolved to the county councils and municipal governments.

But that would probably not change much.

The Swedish health care “a system that ensures everyone equal access to health care services. ” They doesn say, “while keeping the budget plan”

“Months to know if you have cancer”

The Swedish oncologist Stefan Einhorn wrote in his book  “The art of being kind” 10 years ago that it is not caring  that people have to wait months to know if they have cancer.  I wonder if that is different today. I am waiting more than a month to make a MRT for the doctors to be able to exclude cancer.  A month is a long time when you have a growing cancer especcially in the well mourished liver.

A cancer cell can in  a month develope and spread huge amounts of daughter cells  ( metastasis ) that makes it almost impossible fror you to fight for your life.

Today at the news, the issue was raised in the news /Rapport 19.30). I took this screen shot:

With blood cancer you get help within 6 days in 73% of the cases.

Only 50% with brain cancer got help in time, that is within 50 days.
cancer in but for severe prostata cancer only 3.9% got good help but within 60 days.

But this statistics talks only about those who have got the cancer diagnos.  Nothing is said how long time it took for these patients to get the diagnos.

I wonder how are the possibility to save a human with brain cancer 50 days after they discovered it?

How many of these patients got rid of their cancer?

Getting older and dying in Sweden

I am scared about getting older in Sweden.  If you are unable to leave the bed they let you lay there until you get bedsores.  We took our mother in law, back home and after a few weeks she was able to walk again.

In Sweden you can die and rotten slowly in your apartment before they discover you. When my mother was sick in Italy they installed a microphone and loudspeaker in her house so they could talk with her and ask how she was doing. If she didnt answer they immediately came to visit her.

More people will die or suffer in Sweden for the hospitals to keep their budget and the government to show up nice $ figures.

Difference between private and public care

A dentist,  friend of mine eplained this:

When you look for help at a private hospital the hospital welcomes you with open arms as they get money from the State for every human they take care of.

That is not the case for the  public health care .The public care has to stick to their yearly budget. All patients have to share a piece of the yearly cake.  So If you look for help at the public health care, the doctor has to leave other patients. To not spend money and time they find easy solutions.

A  public healthcare  doctor may because of lack of shared time and resources, tend to think :

or  being stressed, to get rid of you, they may take the risc saying:  “There is probably nothing serious with you.  Go home.” or “take a rest and talk with you psycologist”

so he can leave you and take care of the other patience.

This happened to me.

“We cannot risc to loose another human life”

Budget is sacred, not human life.

This reminds me about my military service in a rescuing platoon. The officer instructed us “If you are in a war zone, If someone looks horrible think that he/she will probably die anyway. Lave him and take care of others.”

A Swedish public healthcare doctor could  think in a similar way:

“Spending money on a dying man
is vasted money”

It is of course not morally unacceptable to thin like that  but this is the way the Swedish health care is programmed.

Do not think Sweden is a paradise to get old in. Think before you leave your country for Sweden.

I am in Sweden now as I can not stand the heat in Italy.

But I will emigrate to Italy as soon as possible and do my best to survive the heat there.

“Spending money on a dying man is vasted money”