Knowing that intelligence includes the ability to learn and adapt to new situations,  the use of the adjective “intelligent” in “intelligent car” or “intelligent home”  is totally misleading.  Even if Artifical intelligence (AI) is planned for cars, there are today only tests being done  with robots with AI.

When I talk about “intelligent Nature”, that doesn’t mean that Nature as a system is intelligent. It can also mean that there is a lot of intelligence in Nature.

So my first question is therefore…

Can we compare a car with AI  with nature?

A car is a assembly of different parts. We can not say that if a car has artificial  intelligence butilt in it  then all screws must be intelligent.  The same with nature. Even if nature has intelligent animals this doesn’t mean that all organisms are intelligent.  Being aware about that we can   can compare a car with AI with the nature as a system, like the biosphere, a biosphere we know includes among others a  ecosystem. I will look at the Biosphere in my article, when looking for intelligence in nature.

Evaluating the intelligence of the Biosphere it is important to know about what makes a brain intelligent. In the brain we have different “areas that work together to give us intelligence.” (Source: www.dailymail.co.uk/sciencetech )

The issue “intelligent biosphere” is talked about by Drew Purves who present his conclusion about Nature and AI at  https://channel9.msdn.com

Before I proceed with this question is it important that we define intelligence and Nature a little more in depth.

the definition of intelligence is 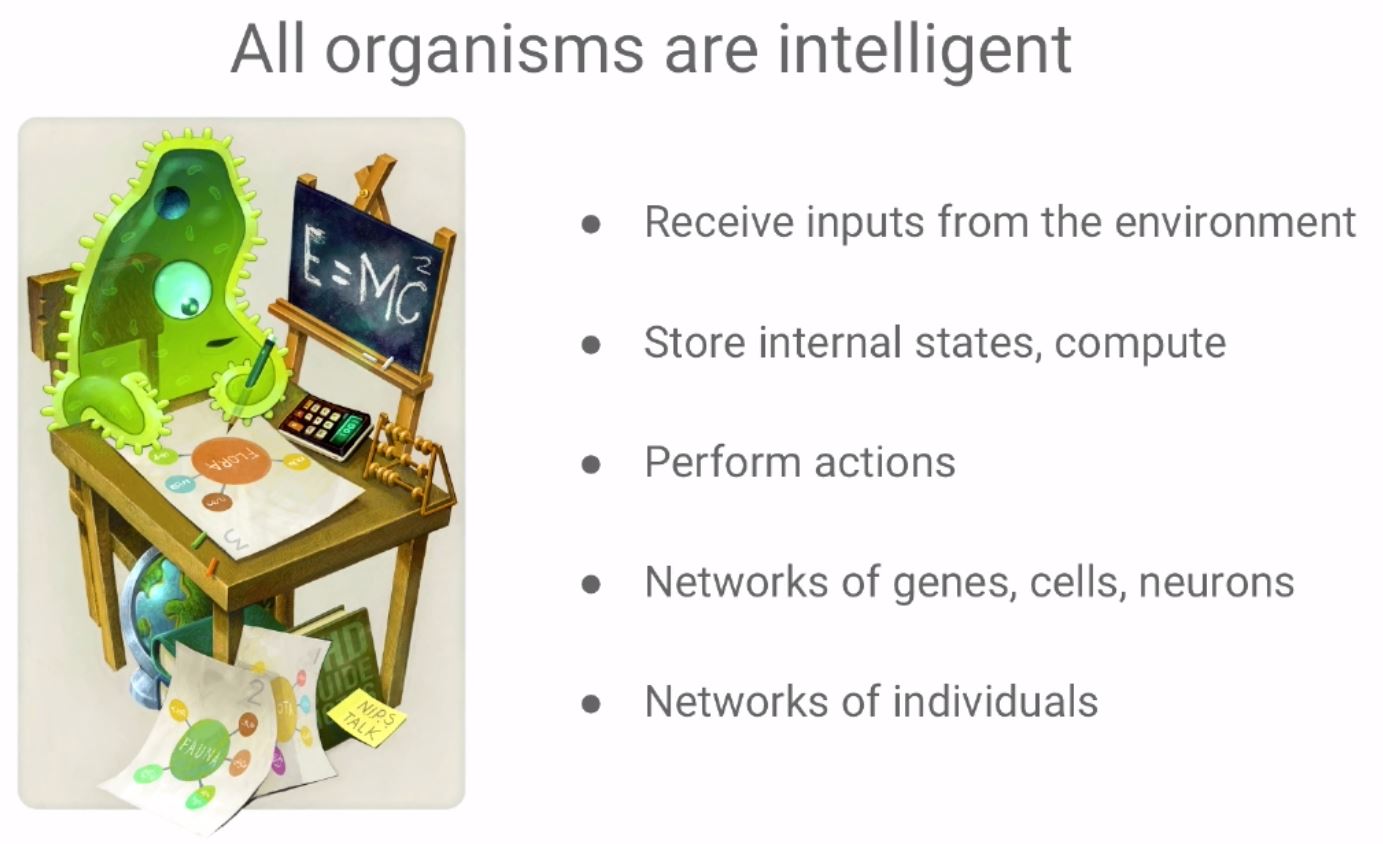 Mariam Webster does not mention  the Nature as it being discussed about as in this dialog:

My article should really be called “A intelligent biosphere” as it is this I put focus on here.

I will in this article focus finding answers to these two questions;
Is nature intelligent?

This is a question of endless struggle. On the one hand, nature obviously produced us, and it becomes troubling to say “that which produced something as intelligent as us is itself not intelligent”. On the other hand, chance, probability, randomness, and singularities play a huge part in modern science, and to question that would surely invite ridicule.  (Source:  listed.standardnotes.org )

Obviously you can not make this conclusion

Signs of a intelligent creator in Nature (Biosphere)

A very observant friend of mine told me that Nature shows many signs to be build by intelligence, in this case a intelligent God.

Here are a few of these examples.

Has the biosphere ability to learn?

I will try to answer this question looking at this similar question:

Have bacteria ability to learn?

Noone would consider a bacteria intelligent. But we all know that  bacteria have developed resistance to antibiotics.  Knowing about the natural mechanisms behind this, we understand that bacteria didnt learn to defend themselves from medicines even if it may look like that. So no, bacteria have no ability to learn.  but through its frequent regeneration and mutations, bacteria have the possibility to adapt to new situations, that is the second definition of intelligence, adabtability. So if bacteria inherently are adabtive, may the biosphere as a system be adaptive too? I move onto this more specified question

Has the biosphere ability adapt to new situations ?

My answer is yes. Here is my motivation.

Looking at the human burning of carbon fossils, we have now effects  carbon cycle.

Due to the greenhouse effect we have also effects on the water cycle,  with the melting of the Earth water reserves, the glaciers and with it the raise of sea levels. Earth has had very high levels of carbon dioxide once in a time.

With our carbon fossil burning, we are having our biosphere to adapt again to the previous ages of its development, e.g. the Cambrian era when the atmospheric carbon dioxide level was much higher.

What parts of the biosphere are involved in this adaptation?

Trees and algae, an important part in adaptation

The trees and the algae in the oceans are the most important parts as these immediately proliferate taking care of the carbon dioxide surplus.

Even if this is less important in this case, all cells have clocks built in to regulate their activity according to time of the day and the year.

Some even talk about intelligent trees as these talk to each other. (Source: https://www.ted.com )

Many humans will suffer and die but the Biosphere will adapt.

One could maybe say that the Biosphere adapt more easily than we human beings.

Cockroaches and insects are known to be more adaptive than most organisms. Cockroaches seem to be the organisms that may even survive a world nuclear war.

So if  adabtability is a definition of intelligence then cockroaches are more intelligent than we are.

.so therefore the conclusion, Nature or our biosphere does not need human made AI. We may instead need AI to become better “shepherds” on this earth.

We need to learn from Nature to develop AI. Like https://deepmind.com/ seems to be doing, 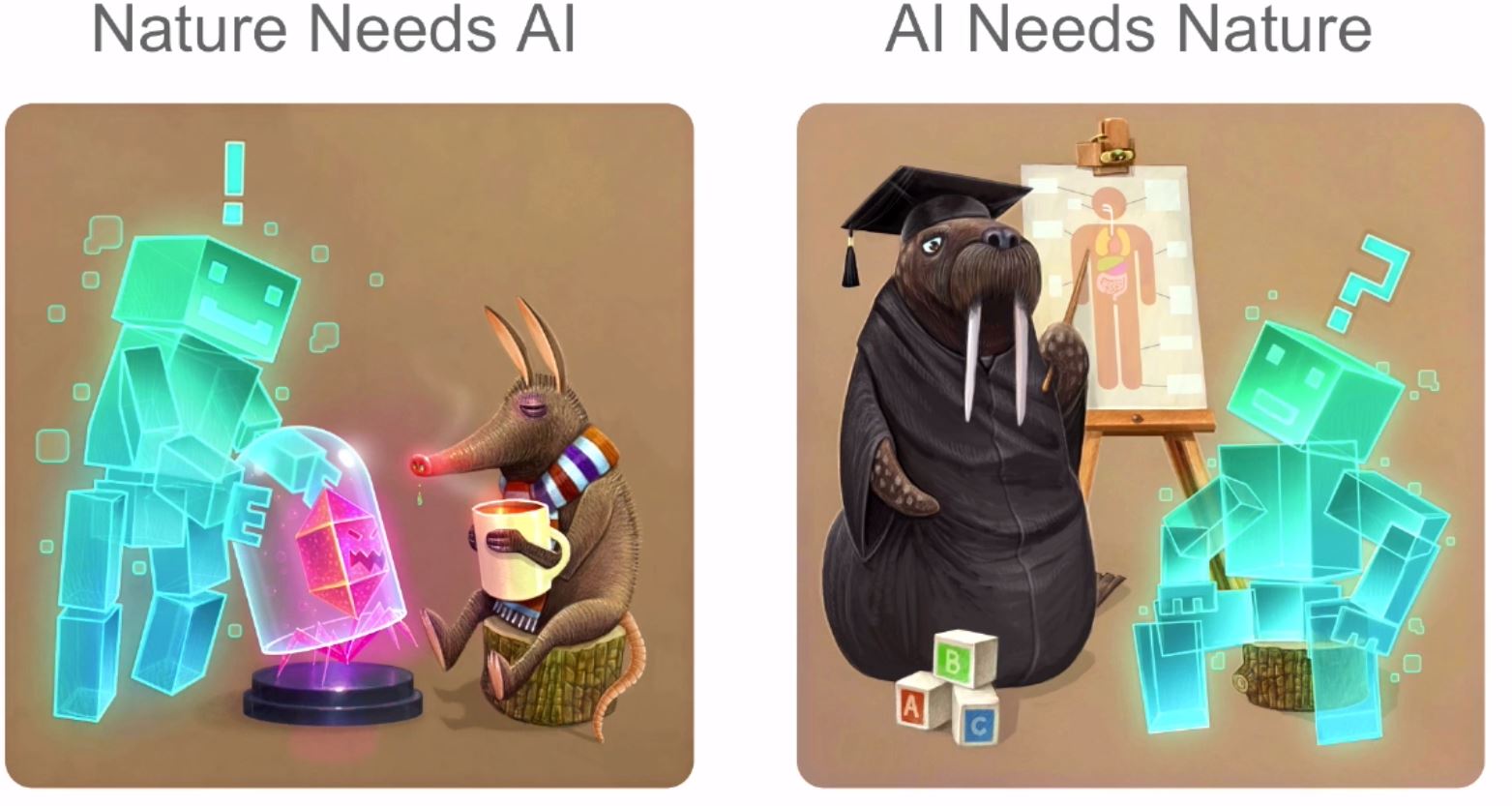 We have a intelligent Nature/biosphere as

We can not say however that the Nature or Biosphere as a system is able to learn even if many organisms in it are able to to do so.