Scientists like Roger Penrose are now looking at quantum mechanics to try to understand consciousness. “Consciousness may have something to do with the quantum theory”. Penrose and Hameroff started the Orch OR hypothesis.
I am personally thinking about the quantum superposition used in photosynthesis. Our brain has a fantastic capability to find different answers to questions. If you are missing something like your phone, you immediately make different hypotheses like “Did you take my phone?” or “May I have forgotten it somewhere?” Psychologists like Vittorio Girotti, Telmo Pievani, and Giorgio Vallortigara (“Nati per credere”) are looking at how we try to simplify our life or the interpretation of it like we do reading holy scriptures like the bible. Have a look at this video about quantum biology that raises the issue of consciousness and quantum physics from minute 50.

When we make that measurement of the wavefunction in the double slite experiment, the wavefunction “collapses”. “The idea that consciousness collapses the wavefunction is now called the von Neumann-Wigner interpretation.” How can our consciousness interfere with the experiment result, the electrons?  does our brain exist in a quantum superposition of states? Consciousness makes physical reality meaningful as Schrodinger said in his 1958 lectures Mind and Matter?
“Conscious observation may play a role – but not in the way you might think.” Matt O’Dowd in this PBS Space Time video:

We need to learn about quantum decoherence and the quantum multiverse. About Multiverse in your living room,
Steve Weinberg  radio metaphor to explain why we are where we are.

This reminds me of Siddharta Gautama’s experiences when he reached Buddhahood, experiences that looks like traveling between different dimensions.

“Nirvana is the eternal state of being where Karma and Samsara no longer exist. It represents the end of desire, suffering and individual consciousness. Until Nirvana is reached through enlightenment, the cycle of Samsara is repeated over and over. ” (Source: https://buddhists.org ) Nirvana is maybe reached when you after many years of meditation practice, reach the full enlightenment “arahant” status in the four stages of Liberation

is it that you, following the eightfold ennobling path and getting rid of suffering and noise from your unconsciousness,    you reach arahant or Buddhahood, you will be able to “change frequency” and get in touch with other dimensions as Siddhartha Gautama did? And maybe also be able to become a medium able to get in touch with souls on the other side (e.g. Frederic Myers and others) of the “chinvat peretum bridge“? 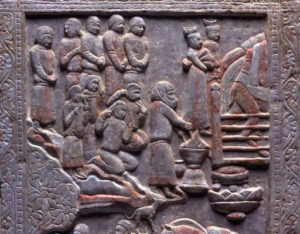 (Detail from Sogdian-Zoroastrian Funerary Couch from China at Miho Museum, Japan.
The images purport to show a soul crossing the chinvat bridge, a priest and fire, and the sagdid dog
( Source: https://heritageinstitute.com )

Consciousness a new State of Matter

Lanza says that our consciousness invents the Universe. This is the solipsistic view.

I think we have a conceptual dilemma. Does the Universe exist?

Read more about it at